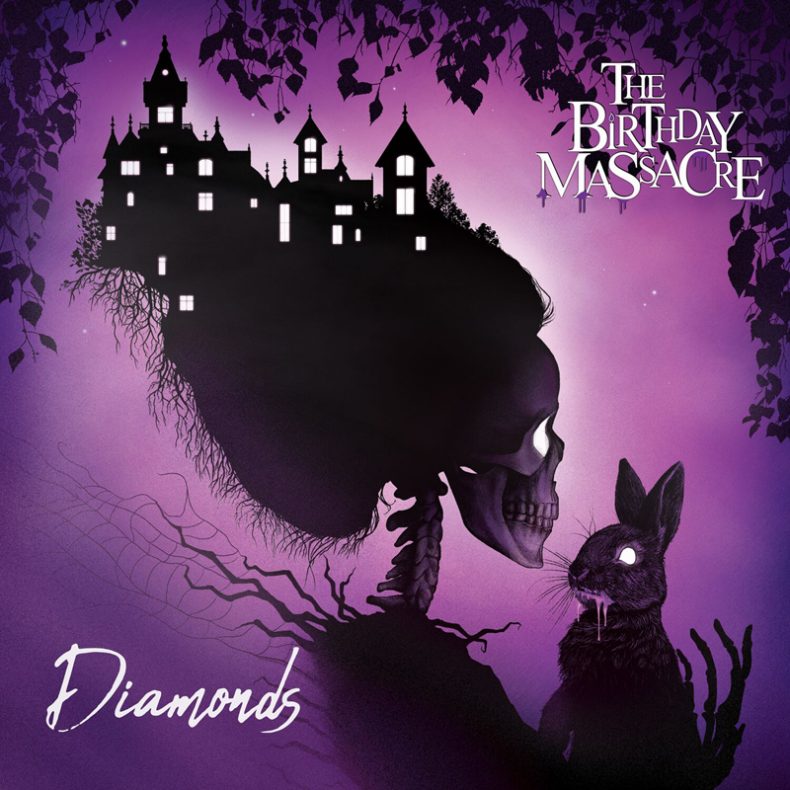 “The night is short. It weighs heavy, but the light always awaits us,” begins the tagline from vocalist Chibi about THE BIRTHDAY MASSACRE’s eighth album DIAMONDS (Metropolis Records; release date: March 27, 2020). A darkly poetic line which could easily describe the band and their music.  While often exploring the lower octaves with minor chords and midnight dance beats, there is always a shining beacon of hope and light within.

An exciting series of dark and light moments that is a trademark of the band’s music, Diamonds explores themes of heartbreak to anguish and from lust to love. “Diamonds  is a current reflection of where Falcore, Chibi, and I are at creatively,” says guitarist Rainbow. “For my part, I think the lyrics are quite contemplative and philosophical. Underneath the surreal metaphors and imagery are some very raw and personal sentiments.”

Set apart from many of their post-punk contemporaries by their distinctive soaring synths and guitars that are paired with Chibi’s beautiful familiar and reassuring vocals, The Birthday Massacre have mastered the art of balance. Exploring the darker register of music and songwriting, their songs beg to peek into the depths and look inside, while at the same time, offering hope and joy… and with their pounding beats and rhythms, an invitation to dance.

From the epic and majestic opener “Enter” with its pounding bassline and soaring guitar textures to chugging guitars of “Run” to the propulsive beats of “Mirrors” to the atmospheric and contemplative closer “Parallel World,” Diamonds is a consistently cohesive album that highlights Falcore’s and Rainbow’s searing guitarwork, textured keyboards via Owen, and a solid rhythm section in drummer Rhim and bassist Nate Manor, all anchored by Chibi’s pristine and vibrant vocals.

“Throughout the writing process we had the opportunity to collaborate with some of our closest and dearest friends,” recalls Rainbow. “We did some writing sessions in L.A. with Amir Derakh and Ryan Shuck from the band Julien-K. The guitar solo on the track ‘Flashback’ was actually written and performed by Amir. We also worked with Brett Carruthers from the band A Primitive Evolution for much of the recording process. Kevin James Maher of Fake Shark also contributed some melodies and inspiration. And former member O.E. returned to contribute vocal melodies and lyrics throughout the record.” 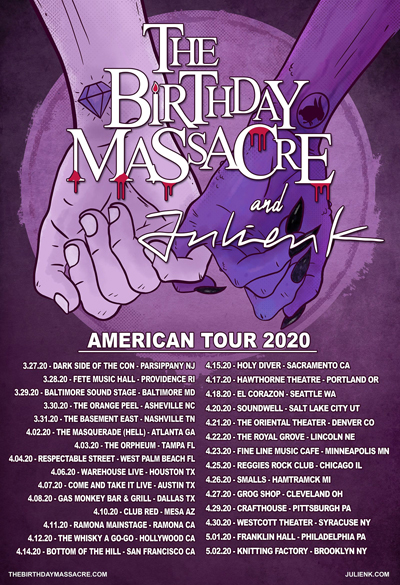 Preparing for the release of their eighth album, the band is excited for the next step, especially in terms of live performances. Known for their exhilarating live shows which Vanyaland called “a perfect high-energy live spectacle” and INKED called “stunning”, The Birthday Massacre is excited to get back on the road.  “Touring will take up the major part of the year in 2020,” adds Falcore. “Beginning March 27th, we kick off a USA tour that will take us around the country in 35 days. Many of the shows are already showing signs of selling out and extra shows have been added in NYC for May.”

UK and Europe where the band is equally as popular are on the agenda as well. “Next in July, we headline the Amphi Festival in Germany,” he continues. “We are very anxious to get back to our European fans and so a full tour of the major capitals of Europe is planned for October, just after we return from South America. Add Russia to the front of the European tour and the UK to the back and that will take us into November.”

With the new album coming and a busy touring schedule, the band always keeps firmly grounded, fully appreciative of their fans. “It’s going to be a great year getting out there to see our fans,” Falcore concludes. “From our very first website all through each of the albums, the fan support has been a major reason for our success and so it is always important to us to include them as much as possible in what we do.”

by Norman Darwen on August 4, 2017
A$AP Twelvyy 12 A$AP Worlwide/RCA Rapper A$AP Twelvyy finally steps out from the Bronx-based A$AP Mob after a decade or so of being in the background to release his first album under his own name – [...]