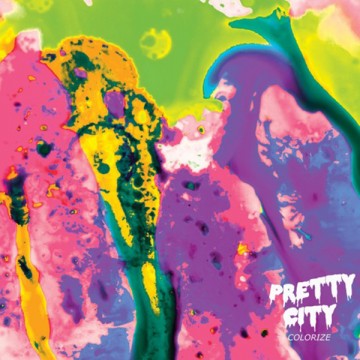 Melbourne shoegazers Pretty City say they are influenced by Mystic Spiral, fictional band from ’90s cartoon show Daria, and aspire to be like Trent’s band from Reality Bites.

Smashing Pumpkins-esque fuzzed out guitars and washy, reverb drenched vocals like New Order. With slick pop sensibilities and impressive live shows, the groups tongue in cheek humour is backed up with a seriously strong band.

Their latest single “Running Around” premiered this past week and will be included on Pretty City’s forthcoming self-released debut album Colorize, due out this April.

Pretty City have had a busy 2 years since bursting on to the scene in late 2012. In November 2013, the band dropped their Heights EP, an epic sprawling 5 track work that brought in fuzzy guitars, powerful, evolving drum patterns, and ethereal, reverb-drenched vocals.

2014 was jam packed. The band released 3 singles, as well as toured nationally 3 times, including multiple shows in Sydney, Adelaide, Canberra, Brisbane, the Gold Coast, as well as regional shows. ‘Piece of the Puzzle’ was featured on triple J and triple J unearthed to rave reviews for its breezy, catchy, and immediate melodies. ‘Roll On’ displayed the band’s versatility, infusing the sound with epic, stadium sized riffs with definite tinges of classic rock. Lastly, the band released ‘Flying’, a blues/glam/grunge/pop hybrid that showed the band’s growing confidence in evolving their playing style, while still creating songs that have the unmistakable Pretty City stamp.

Pretty City have played in excess of 250 shows in their short 2 and a bit year life. As well as playing at live music institutions across Australia, the band have supported British India on their regional tour (2013), Stonefield (2014), Flyying Colours (2014), and Magic Bones (2014), to name a few. They also played at the Espy New Years Eve festival alongside Architechture in Helsinki, Kingswood, Adalita, and DZ Deathrays. Other festival spots included Lawsfest (2014) alongside Lurch and Chief and Drunks Mums, as well as Spin Cycle festival in Geelong (2013), alongside the Jungle Giants.