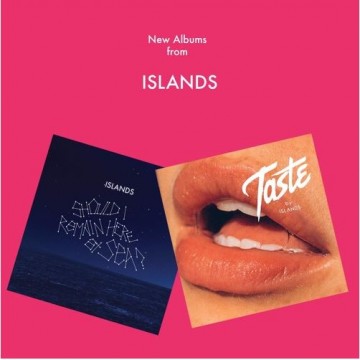 Islands To Release Two New Albums Taste And Should I Remain Here At Sea? On May 13

Stream “Back Into It” & “Charm Offensive”

Islands will return this spring with not one, but TWO new albums on May 13.  Don’t get it twisted: This is not a double album, nor is it a case of editing gone awry. Taste and Should I Remain Here At Sea? are two distinct, entirely unique records, each one a wholly individual offering.  Both releases are available to pre-order now via iTunes and Amazon.

Consequence Of Sound has premiered a playlist featuring “Back Into It” from Should I Remain Here At Sea? and “Charm Offensive” from Taste and the songs are available to share via SoundCloud. Islands’ Nick Thorburn says, “Back Into It’ “is a study in contradiction. It’s a bright, loose affair, with bubblegum backing vocals and major key guitar chugging, but you don’t have to dig that deep to hear the venom, acrimonious and sour.  When someone rains on your parade, make rain on your parade lemonade.” By contrast, he says, “‘Charm Offensive’ is all sharp angles, smooth lines and mechanical melodies, but just underneath is a desire for the round edges, the soft corners, a loose swing and some crude revelry. I was trying to express that urge to find the good times, and let the bad ones go. To stop using song writing as a pool to wallow in. To find the light, to sneak in, “pull back the shades, see the darkness fade”.
The first North American tour to support the upcoming releases was also announced with Islands playing shows throughout the east coast and west coast this spring. The tour includes stops in Montreal, Toronto and Vancouver.  Full list of dates below. Last summer, Islands decamped to a little studio in Toronto to record the upcoming albums. Taste, Islands’ sixth record, is a muscular, crystalline affair, with the majority of the music electronic, buoyed by drum machines, programming and arpeggiated vintage synths. The songs still flirt with Islands’ bread and butter; evergreens such as ennui, remorse, and a general disenchantment with the modern world hover over the tracks, with lines like “we got so thrown, we felt lost at home” and “steal a little moment, lose it like you own it”, to hammer home the point. The songs cut a wide swath, however, and also go in directions that Islands has never tackled, including police brutality and white male privilege (!).

Should I Remain Here At Sea? (a semi-reference to Tarkovsky’s “Solaris”) Islands’ seventh album is, in many ways, a spiritual sequel to the debut album, 2006’s Return to the Sea; a natural, raw record, stripped down to its essentials, performed live off the floor. Reflecting on the decade that has elapsed, SIRHAS kicks off with a darkly funny tartness, tackling religion, race, addiction, and murderous fantasies, but by midpoint, the songs give way to a resigned and doleful melancholia, tackling heartache, numb disillusionment and emotional disorientation through the guise of stupid parrots, the Internet, sea turtles and perhaps the loneliest maritimer to ever sail the seas. It was recorded as spontaneously as could be, with some of the songs captured live in one take, vocals and all.

Both albums were produced by Nick Thorburn and Evan Gordon. Taste was mixed by Roger Levins and SIRHAS was mixed by Rob Schnapf. About the process, Nick says: “Contained on these albums are the saddest songs I’ve ever written, the funniest songs I’ve ever written, the catchiest songs, and the most satisfying songs. Excuse all the superlatives, but I honestly don’t think I’ve ever walked away from a recording process more fulfilled and invigorated.”
Additionally, Nick Thorburn composed new music for season two of Serial, including the show’s theme song. Speaking to Vulture Thorburn noted, “For the first season I used a lot of guitar stuff. This one I used a lot more synths. It’s a little more ambient-sounding. It’s not electronic, but it’s atmospheric. You identify the atmosphere. I think there can be a symbiotic relationship between the two [Serial Soundtrack], especially for Islands.”

Islands
Taste
Should I Remain Here At Sea?
(Manque Music)
Release Date: May 13,2016

Pre-Order Should I Remain Here At Sea? Via:

by Nathan Pike on June 11, 2021
Islands Islomania Royal Mountain Records The definition of Islomania is to have an enthusiastic obsession with islands, where the mere thought of being on a little world surrounded by water has [...]