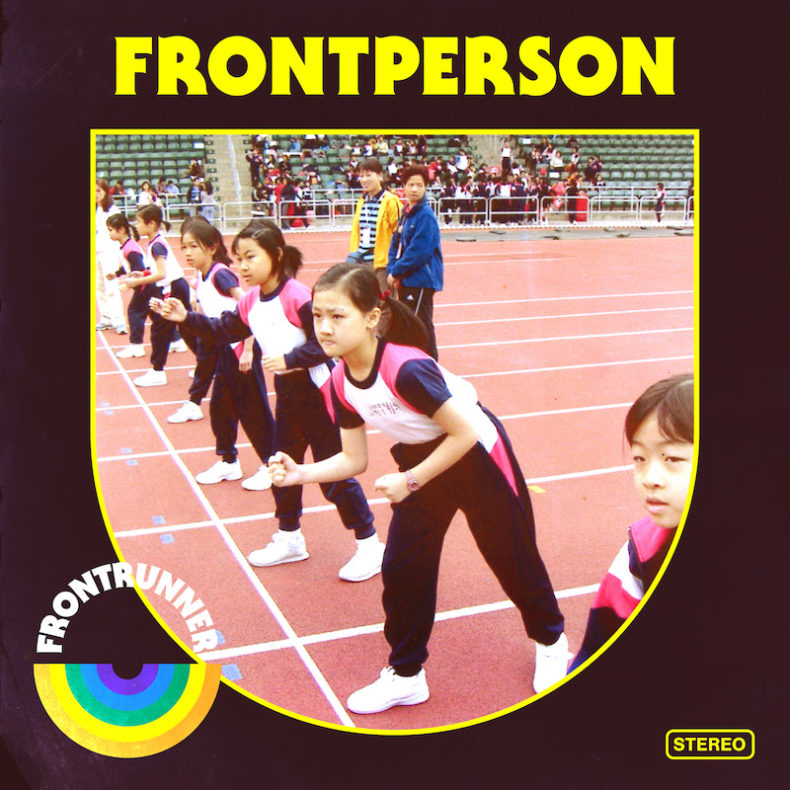 Frontperson is the new project from Kathryn Calder (vocalist and keyboardist for The New Pornographers) and Mark Andrew Hamilton (who has released 6 albums as Woodpigeon).  The duo is pleased to share the video for “Tick – Tock (Frontrunner)” the first single from their debut album, Frontrunner, out September 21 on Calder’s own Oscar St. Records label.

“I loved the concept of a backwards track meet, because I love how this seemingly small change in perspective (and a change of perspective is something I think we can always use), really brings out the details that go into making these impressive, specialized movements.” and Hamilton commented “Personally I love how the video shows something so competitive but by showing it in reverse, equalizes everyone. There’s no winner, everyone ends up back at zero all together. Watching the footage for the first time, I was stunned by how insane some of those movements are — the things humans do to be the “best” or first is ridiculously amazing. But most of all I love how what they’re doing is so strenuous and at their individual extreme limits, and we see it reset and disappear.”

Frontrunner got its title from a cherished photograph that the duo would eventually incorporate into the album artwork of their debut, as Hamilton explains “About 20 years ago, a photographer friend of mine named Ambrose Fan gave me this incredible picture of a young girl with her fists clenched, getting ready to run a race at a track meet. I’ve lived in a lot of places since then, and this photo has always come with me. When we started recording at the National Music Centre — basically one of the world’s best keyboard museums where we had pretty much free reign over their incredible collections of synths and such — I put the photo on the recording console, and it stayed there for two weeks guiding the making of our record. Whenever someone would ask what sound we were going for, I’d just point at that picture.” Calder adds “The photograph is now our record cover, it was the inspiration for our album name, and it’s still guiding this record, because we decided to use it as inspiration for the video for our first song, “Tick-Tock (Frontrunner)”.