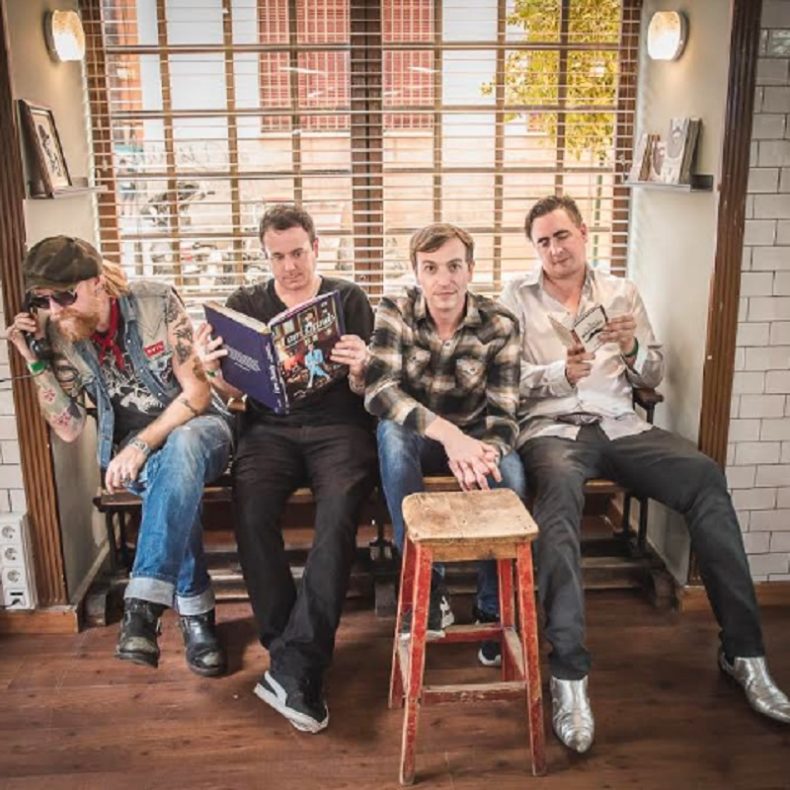 Berlin-based post-punk art rock band, Art Brut, are delighted to announce details of their new album, Wham! Bang! Pow! Let’s Rock Out!, which will be released on 23 November via Alcopop! Records.

The album’s striking artwork comes courtesy of contemporary German pop artist Jim Avignon—a hugely respected cult figure in the art and techno subculture in Berlin, he currently lives and works both in Williamsburg, Brooklyn and in Berlin.

Alongside the album, the band are also very pleased to announce a run of UK headline tour dates for February and March 2019.

To celebrate the news the band have revealed the video for their new single ‘Hospital!’, in which a delightfully fragile ‘Eggy Argos’ traverses the pitfalls of modern life. It’s a stark juxtaposition with the deeply personal track for the band’s larger-than-life front man and huevo-namesake Eddie Argos who, three years ago, found himself dangerously ill in hospital.

“I didn’t realise quite how ill I was at the time,” explains Argos, “I was in a German hospital und mein Deutsche is nicht sehr gut. I had a big operation, bigger than they were expecting when they started operating on me, and there were a few complications. They kept me in for nearly a month. It was the most undignified month of my life and although I was very grateful to the surgeons for saving my life and also to the nurses for taking care of me, I despised every fucking minute of time I spent there.

“The only thing that kept me sane was the mantra that eventually became this song. Every single lyric was written and repeated over and over again as I suffered numerous indignities. Songwriting is something I’ve always used to alleviate stress and on this occasion I really tested it to its limits. What I am most impressed by is that even when I’m at death’s door and pumped full of morphine, staggering around and collapsing all the time, I can still write a comical call-and-response backing vocal to amuse myself.

“I’m very glad not to be in hospital anymore—of course, as this was three years ago, I’ve broken all the promises I make to myself in this song.”

Previous single “Wham! Bang! Pow! Let’s Rock Out!” continues to pick up an ever-increasing bundle of spins from BBC 6Music and Radio X, with support flooding in for the band’s long-awaited return from the likes of Pitchfork, Rolling Stone, NME, The 405, Clash and many more international publications. The track also hit the Alt Rocked and Transistor playlists on Spotify.

Art Brut are now comprised of founding members Argos, Ian Catskilkin and Freddy Feedback—whose absence in press shots is due to her extended maternity leave—while Toby Macfarlaine joins on guitar and Charlie Layton joins on drums.

Wham! Bang! Pow! Let’s Rock Out! will be released November 23 via Alcopop! Records.

Hooray
I Hope You’re Very Happy Together
Good Morning Berlin
She Kissed Me (And It Felt Like A Hit)
Schwarzfahrer
Hospital!
Too Clever
Kultfigur
Veronica Falls
Wham! Bang! Pow! Let’s Rock Out!
Awkward Breakfast
Your Enemies Are My Enemies Too