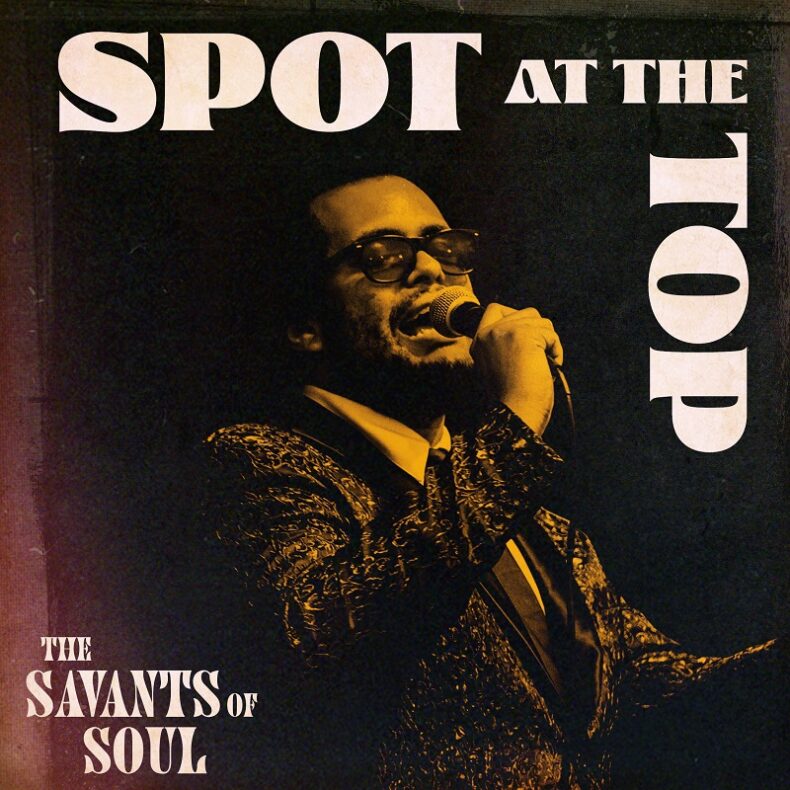 THE SAVANTS OF SOUL – “SPOT AT THE TOP”

Gainesville, Fla., 9-piece Southern soul outfit The Savants of Soul are releasing a series of singles leading up to a July tour. These singles will follow the release of their pre-pandemic self-titled album, recorded over 10 days at legendary FAME Studios in Muscle Shoals, Ala. SoS have been making a name for themselves as live performers on the festival circuit, including Suwannee Rising, Okeechobee Music & Arts, Gasparilla, and Red Gorilla at SXSW. They’ve shared bills with Benjamin Booker, St. Paul and The Broken Bones, Maggie Rose, The Original Wailers, George Porter Jr. of The Meters, and the late Charles Bradley.

As 2022 rolled around, a new world had dawned and members were nurturing their new pandemic babies. Ferwerda had a son, and drummer Benny Cannon had a daughter, born 10 days apart, during the group’s time off the road during the pandemic. But the band members also wrote a lot, worked on ideas and musical parts, and the resulting songs are now emerging as part of their upcoming full album, set to release in early 2023.

“Family comes first for all of us,” says Emerson, “so it’s been good to see the band continue to grow and work and keep the ‘business’ running while everybody’s dealing with their obligations, as they should.”

“The Savants of Soul are my second family,” Ferwerda adds. “Our primary families are growing, but it’s thrilling to be playing music together again. It’s a new chapter in all our lives, and it’s really exciting!”

They learned a lot from recording their last record at FAME with acclaimed producer Vince Chiarito (Charles Bradley, Black Pumas) and engineer John Gifford III, applying that knowledge to their new recording sessions at Pulp Arts in Gainesville with Chiarito again producing and acting as engineer, along with Danny Clifton and Davis Hart.

“These new tracks are building off of the FAME sound,” Emerson says, “but cutting the fat way back and with more self-assured songwriting and arranging with contribution from the whole band. We honed in on our sound while pushing the boundaries of what we’ve done in the past.”

“It’s a lot easier to be creative when you put constraints on yourself,” says bassist John Gray Shermyen. “We’re more intentional with everything we do now, from writing and arranging to mixing. We want to break songs down to their base part, so we’ve become really minimalistic.”

The Savants of Soul’s new batch of singles get at the core of what’s important in this reborn world, spanning from romanticism and familial relationships to the dregs of democracy and our American dream mythos. “Spot at the Top” may set the stage for this new era of SoS, but this is a band that is best experienced live. Luckily, they’ll be on tour this July, before they hop back in the studio to put the finishing touches on their upcoming album.

The Savants of Soul are:

“‘Spot at the Top’ grew out of a simple I to IV groove we had kicking around, inspired by some of Aretha Franklin’s instrumentation on albums like Lady Soul. It’s a storytelling song about a man affected with the ‘temporarily embarrassed millionaire’ mindset that I think is all too prevalent in the US–an outlook that can prevent us from seeing our common humanity and blind us to the possibilities for real material change in this country. We really broke the groove back down to its essentials in the studio and took a lot of our mixing ques from Etta James’ Tell Mama and Clarence Carter’s first album. I think the lineage of all those late-60s southern soul records shines through when you hear the track.” ~John Gray, Bass