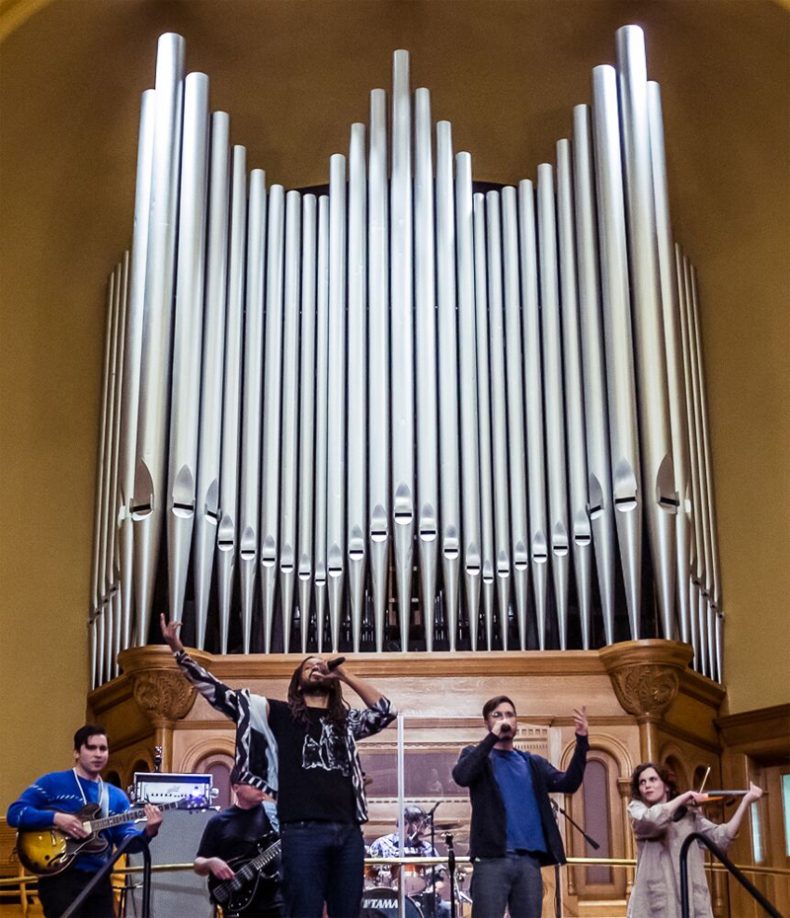 It was easy to see that many concertgoers didn’t quite know what to expect when they realized that the Flobots would indeed be performing in a church. Fans and parishioners alike took their seats and whispered quietly amongst themselves. Equally, those who regularly attend services didn’t quite know what to expect from the Flobots, but all were there for a good cause.

Three empty risers line the pulpit stage while those in attendance quietly but anxiously wait for the High Gear: Building for the Road Ahead fundraiser supporting Express Bike Shop to begin. Choir members filed in and found their place upon the risers, nearly filling each one. The first set consisted of the VocalPoint Chorus singing selections that embodied the purpose of the fundraiser. In between songs, interviews with those who have benefitted from the Express Bike Shop’s program were projected onto a wall nestled between the stained-glass windows and the huge organ pipes that lined the back wall of the stage. Each of the musical selections had some purposeful message that ranged from individuality to social justice like Dessa’s “Look Out Above” and some simply for the fun bicycle theme like “Bicycle Race” by Queen, complete with bicycle bells.

The much-anticipated Flobots took the stage next. Vocalist Brer Rabbit took ample time to explain the thought and meaning behind each song selected, and would prompt the audience as to how to participate, from call and response of the chorus to waving hands in the air. He kept the crowd engaged and entertained. Each musician had time to shine and impressed the crowd with their musicianship. “Handlebars”, their 2008 platinum breakout single that catapulted them onto the global scene, was fifth in their set following other hits that included “Circle in the Square” and “Fight with Tools”.

The last song on the program was “I Lift My Voice” with the refrain projected for all to sing along to. “When they try to divide us, it will only unite us/I lift my voice.” The Flobots graciously accepted their applause and proceeded to surprise the crowd with one final song, a uniting rendition of Sly & the Family Stone’s “Everyday People”. It was an aptly chosen closer that tied a bow on the whole event.

Huge shout out to the Flobots, VocalPoint Chorus, Keystone’s Youth Employment program at Express Bike Shop as well as anyone and everyone that made the High Gear: Building for the Road Ahead fundraiser an enjoyable and eclectic way to raise money for a good cause.

Scott was raised in southern Minnesota, attended the University of Wisconsin – Stout, spent some time abroad and currently resides in Minneapolis, Minnesota with his wife and their two daughters, only son and two dogs. Long time music lover and concert-goer, Scott has attended countless concerts and festivals since 1996. His fondest concert memories include meeting the love of his life at his first music festival. Sneaking into Linkin Park’s first Minnesota show. Hosting the second stage on the Projekt Revolution stop in Somerset in 2004 and pretty much every show he’s attended with his concert cohort, Scott. Yes, there’s two of them! As of late, Scott has started making memories and sharing his love of attending concerts with his children. Shinedown was his oldest daughters’ first show thanks to his cohort, The Interrupters was his youngest daughters’ first show. His son’s first show is still to be determined.
RELATED ARTICLES
flobotslive reviewminneapolis