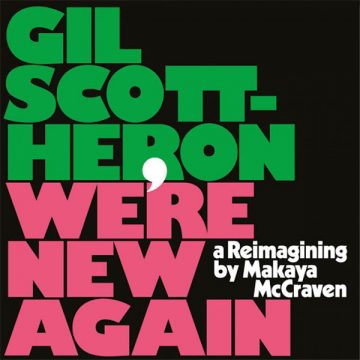 10 years ago, Gil Scott-Heron released I’m New Here. It was not only his 13th studio album, but it was also his first album of new music in 16 years. It would also be his last before passing away at the age of 62 in 2011. Now, jazz drummer Makaya McCraven has taken the rootsy and folk-inspired spoken word of I’m New Here and has reimaged it to feature Heron’s original vocals over a lush and modern jazz backdrop. The result is We’re New Again, an 18-track celebration of both Gil Scott-Heron and McCraven’s incredible creativity.

The poetry of Heron resonates in the modern age of 2020 as the album opens with his original dedication of “Special Tribute (Broken Home pt. 1)” before heading into the original title track and lead single, “I’m New Here”. It is here that the original finger-picked acoustic guitar is replaced with gentle and electronic keys, a beat inspired by both hip hop and modern jazz, and soft guitars. For those familiar with the original, the transformation is immediately apparent and welcomed, while those new to Heron’s work can still appreciate it for what it is: unique and modern smooth jazz fronted by the gruff and poignant voice of Heron.

Through the course of its run time, McCraven’s interpretations of Heron will continue to surprise the listener. From the straight, up-tempo hip hop jaunt of “Running”, the grand experimental jam of “New York Is Killing Me”, the ominous culminating ostinato of “The Patch (Broken Home pt. 2)”, the piano-driven and soulful ballad of “I’ll Take Care Of You”, to the brick house funky attack of “The Crutch”, this is an exercise in songwriting, innovation, and creative power. McCraven has truly crafted something original and unlike anything you’ve heard. His musicality and ability to adapt while creating is inspiring and I encourage all artists to take note.

Heron, sadly, is a creative figure who is not celebrated enough. His poetry and artistry have proven to be timeless and stand as an essential reflection of a particular creative vein in American history. By taking his original vocals and setting them to what can best be described as a sonic experiment of poetry, jazz, and hip hop, McCraven has brilliantly paid tribute to Heron in a manner that few could. By its very nature, just like jazz and Heron himself, We’re New Again is not an album for everyone. To do so would dilute its purpose and purity. Rather, McCraven revels in his own creative excellence, making him equally a curator of the past and a songwriter for tomorrow. Simply put, We’re New Here is a pure, unadulterated stroke of artistic brilliance.

A passion for music has always been a part of Gerrod’s life. As a young boy, he was raised on a steady diet of the music from The Chili Peppers, Aerosmith, The Stones, Prince, and others from his mum. Raised in the GTA, Gerrod continued to foster his love for music by attending a wide range of concerts and learning the drums. His unapologetic passion for music has no bounds and has spread to a wide variety of styles, whether it be the 90’s rock that sound tracked his teenage years, the jazz he studied in university, or his newfound love for hip-hop. He recently received his bachelors in music and education from York University and is passionate about writing and reviewing good (and less than good) music. Gerrod is also the drummer and songwriter for a Toronto based rock & roll band, One In The Chamber.
RELATED ARTICLES
album reviewalbum reviewsxl recordings
10