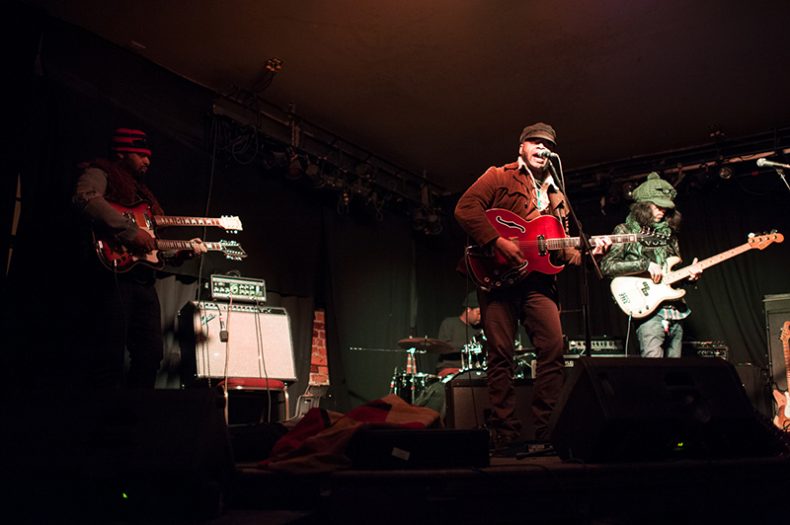 Having lived in nearly a dozen cities across Canada, I can tell you that it’s always a shocker for me when I hear that some legendary group or artist is playing a concert in my neck of the woods. Even more so if I’m actually a fan of that artist, as my tastes are a little off the beaten track, so to speak.

And it’s certainly not every day that a legendary band crosses my own particular geographical path (especially given my penchant for small towns). Well, not even every year or, in this case – decade. I managed to catch The Veldt, who are not only considered pioneers in the shoegaze realm, but also with respect to alternative soul. The Guardian recently ran an article on them noting their significant influence on one of Canada’s leading producers, Doc McKinney, who would then go on to produce Drake and The Weeknd, in addition to Esterio. Very cool indeed.

Before jumping into The Veldt’s end of the three-way gig, the two opening bands are definitely worthy of mention. The concert kicked off with the three-piece Jesse Foster Band, including Jesse himself plus buddies Rhys Climenhage and Caleb Northcott. With about 5 songs in their repertoire that night, they seemingly rely heavily on jazz chords for certain compositions and pull it off really well, especially since they sometimes even managed to sound like a slowed down version of Nirvana at the same time.

At one point during their performance, I turned to Danny Chavis and asked “What does this sound like to you?” He answered with a big grin “like codeine entering my system”.

The first band, apart from what I imagine to be a calmer drugged-out Nirvana, that comes to mind in terms of a similar sound is perhaps Makeout Videotape (also not particularly known, but you are welcome to find his music on Bandcamp).

The Jesse Foster clan finished their set with two tracks that definitely had more of a psyche / stoner rock element to them, complete with drones and pedal effects.

Comprised of just three musicians, two of whom are actually under the age of majority (and one of whom overlaps with the opening band), it came as quite the surprise that Stacy Green Jumps could punch out quite a full sound – but then again, there is always The White Stripes to refer to as an example of how this has clearly been done before. Band members Jemma Woolidge, Ambrose Veno and Rhys Climenhage are loaded with spunk – yes, even the female bass player had loads of it for all her 16 years. Pretty impressive.

If I had to paint you a picture of their sound (and, of course, that is what I’m supposed to be doing here), I’d say it sounded like a wicked cross between Colin James, Wild T & The Spirit, and Matchbox 20 (I really hope that is not the beer talking, and I can nearly see them cringing upon reading reference to the latter band). They basically didn’t begin their set as such though – in fact, there was some math rock kicking in with grunge elements for the first few tracks. They played eight in total, but each of them clocked in at under 3 minutes, so they were on and off the stage sooner than I would’ve liked. The remainder of their set was significantly heavier than when they started.

As the concert went on, they slipped closer and closer to what I would terms as blues-psych. Before tonight I would’ve said that sounds like an odd combination of genres, but they blended it so well, I have to hand it to them. It’s no wonder the band members count Flaming Lips and Led Zeppelin among their main influences.

The time of night had come that everyone had been waiting for. But apparently they were waiting in the cold. I was shocked for a minute to see how few people there were in the main room when The Veldt finally took to the stage, but then suddenly everybody from the opening gigs poured back into that room, filling it up with a positive energy that was already immense from the get-go as soon as The Veldt began their first song.

While the first two tracks got everyone riled up, the band then smoothly slid into ‘Sanctified’, the lead single from their new EP ‘The Shocking Fuzz of Your Electric Fur’, which just dropped this past weekend. The band – comprised of identical twins Danny and Daniel Chavis, Hayato Nakao and Marvin Levi – had everybody awe-struck. They carried this mood straight through to ‘Symmetry’, a track lifted from their forthcoming LP, which is expected to drop in late summer or early autumn via Sonablast Records.

The diversity in the sound of the songs performed was noticeable, with their various influences implicit across their sound spectrum. From their tracks, produced by Cocteau Twins’ frontman Robin Guthrie, to those recorded under Ray Schulman (producer for Bjork and The Sundays, among others) and now the mainly beat-driven ‘dim light’ style tracks that they’ve been dishing up lately. They offered a wide range of tracks for the audience and hung around for a good hour of meet and greet with their new-found fans afterwards.

Shoegaze as a genre is generally rather limiting, with most artists in this realm very much thinking ‘inside the box’. The Veldt has that reverb and distortion wall of sound factor happening – don’t get me wrong – only it tends to be more melodic and heartfelt, with deeper vibes pouring in thanks to the infusion of some pretty amazing alternative soul. Heartfelt, inviting, and synergetic – these are words that immediately come to mind when summing up their performance. My message to The Veldt: Come back to Canada again very soon!

The Spill Magazine is a Toronto-based online publication dedicated to covering the independent music scene with a strong focus on our thriving hometown talent. Our writers bring you up-to-date news, in-depth features on musicians and reviews for the latest CD releases. We also travel to the front lines for all local festivals including Canadian Music Week and North by Northeast. Don’t forget to check out our Facebook and Twitter pages for all daily Spill updates.
RELATED ARTICLES
live reviewthe veldt