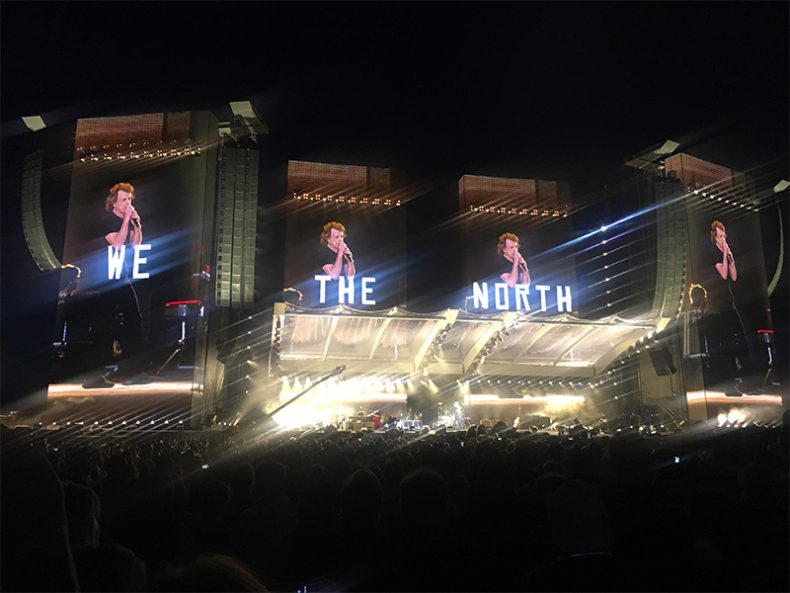 The greatest rock ‘n’ roll Band in the World returned to Canada tonight for just one show at Burl’s Creek, bringing those from Toronto, Ottawa, Hamilton and more, together for a day in the countryside northeast of Toronto.

The veteran rockers blasted onto the stage after a brief video introduction with their 1968 anthem, “Street Fightin’ Man” and greeted the crowd who had been were eagerly awaiting their arrival through the scorching summer heat. It was a very much needed burst of energy as the heat had begun to make the fervent crowd a little stir crazy.

After all that has happened earlier this year with Mick Jagger’s health, expectations were probably not as high as they normally would have been. However, the 75-year-old rock god took everyone by surprise and exuded more energy than most 20-somethings.

Although Jagger did miss his cue on the opening lines of “She’s a Rainbow”, it’s things like that that give the audience the live performance aspect. While he is a rock god, he is still only human. Nevertheless, it was Jagger’s immense stage presence that really carried the show and the overall energetic vibe. His constant moving around and camp dance moves kept everyone in the park involved in the music.

Keith Richards, on the other hand, seemed half asleep during his performance, looking like he was struggling for breath for most of the show. Surprisingly it was Ronnie Wood who shone through, shredding solos on more than a few numbers. And of course, there was Charlie Watts who, while looking very much his stone-faced self, kept the rhythm without missing a beat.

The band eased through the numbers that followed for the next two hours, playing such hits as “Honky Tonk Women”, “Paint it Black” and “Miss You”, the latter including a killer solo by bassist Darryl Jones.

Jagger’s jab at premier Doug Ford and his congratulations on the Raptors championship were a nice little segue to his wishing the crowd an early Happy Canada Day.

With an exuberating encore that included mind-blowing versions of “Gimme Shelter” and “Satisfaction”, the Stones waved and said goodnight. Unfortunately for most audience members it was not the end of the night as it took five hours for the parking lot to clear due to an immense lack of organization on the groundskeepers end.

While the question is always raised after each tour, this time seriously one is seriously left wondering if this will be the last time the Rolling Stones will come to town. Fingers crossed we can see an “80 and Counting” tour in the next few years.

As a child growing up in the suburbs, Ryan found music as a way to soothe his boredom. After first hearing AC/DC at the age of 10, he was hooked on music. Tracing its roots to the ‘50s, he became obsessed with Elvis, Buddy Holly and Chuck Berry. Somehow that led to grunge, then psych-rock, then jazz, etc. The list goes on and on and his collection of vinyl records continues to grow.
RELATED ARTICLES
burl's creeklive revieworo medonte

by SPILL NEWS on March 2, 2017
THE BIG FEASTIVAL IS COMING TO CANADA IMG Canada Ltd. is thrilled to announce The Big Feastival, the United Kingdom’s favourite food, music and family-fun festival, as it launches in Canada [...]