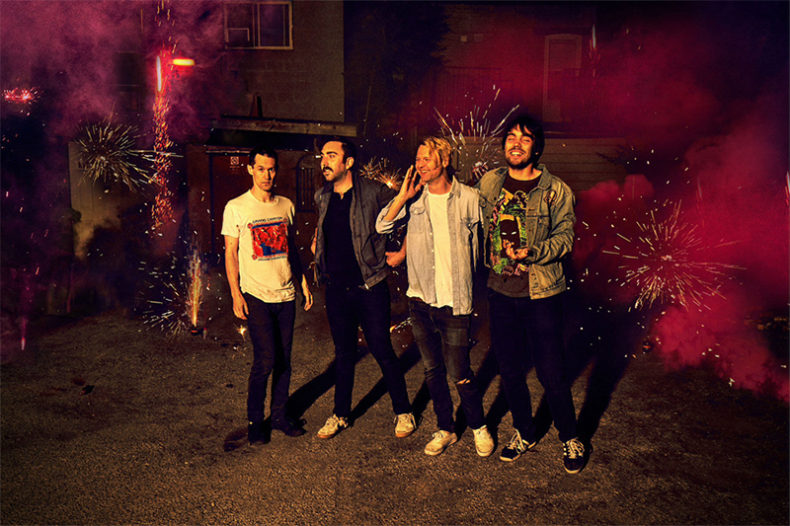 Every time I’m on my way to see Hollerado, I think to myself, “They probably won’t be as good as last time”.  This venue isn’t as good… the setlist was just TOO good last time… last time they played some kick-ass cover.  Then they prove me wrong.  Delightfully wrong.  Time and time again.  It just seems their onstage antics, crowd banter and bullet-proof sound never seem to take a night off.  I’ve always marveled that while some bands seem like they won’t be happy until they’re rock stars – Hollerado seems to be happy making a living doing what they love.  And I mean that as the most sincere and heartfelt compliment possible.  This band just wants to play music, have fun and make sure the crowd walks away with a smile.  Sunday’s assignment; Hamilton’s Festival of Friends.  For the first time in 6 years, the festival was coming home to Gage Park.  The park that had accommodated the festival since 1976.

While earlier afternoon showers and grey skies may have caused for a slightly smaller crowd than expected, the native rockers of Manotick, Ontario would not be deterred from their job. A boisterous and loving crowd was treated to the bass driven “Grief Money” as the set opener.  A song the band released earlier this year accompanied by a YouTube lyric video featuring a compilation of Donald Trump images.  A subtle, yet powerful nod to their view on America’s current political climate. Lead singer, Menno Versteeg, got a roar of appreciation as he said that every time they play Hamilton, bassist Dean Baxter “threatens to move here” and “so this time he did”.  Acknowledging that Baxter had literally moved to Hamilton that morning.

(Side note: oddly enough, this is not the first time this has happened as two members of the Trews moved to Hamilton days before a gig a couple of years ago, joining the Arkells, Terra Lightfoot, Monster Truck and Tom Wilson as notable musicians around town.)

Apparently, Sunday’s gig was the first show Hollerado had played since June as they hadn’t played a note all July after extensive touring earlier this year with Sum 41 and promoting the release of their latest album Born Yesterday.  You’d never have known it, as the band seemed in mid-tour form, rocking their way through their set, dancing around stage and jumping from the drum kit.  Although Versteeg did admit he was pretty out of shape after trying to jump rope with the microphone cord.  The vocalist also endeared himself to the locals as he noted, “I love playing here, you seem to have less douchebag assholes than most places” before launching into their newest single, “I Got You”.  The evening continued with “Eloise” (for Versteeg’s 2 year old niece of same name), “Good Day at the Races” and “Pick Me Up”. Although not before a thorough discussion about the midway rides, most notably the Gravatron (aka “the six dollar chiropractor”).  Menno got the audience waving their hands back and forth and singing along during the crowd favourite “Americanarama”, but perhaps the most memorable part of the night came as Hollerado was joined on stage by Stars singer Torquil Campbell for a cover of Dire Straits’ “Money for Nothing”. It was an incredible duet that you almost expected to end the performance, but the energy was kept alive with arguably the band’s biggest hit “Juliette”.  With one more in the tank and an offer to the crowd to hang out by the merch table after, it seemed another cover was coming as the band teased out a few bars from ZZ Top’s “La Grange” only to stop and say “nah, we’re just kidding” and close out the night with Record in a Bag’s “Do The Doot Da Doot Do”. Remember when I said Hollerado “just wants to play music, have fun and make sure the crowd walks away with a smile”? Well, mission accomplished.

Oh and that offer to hang out after? The band talked to, took pictures with and signed anything and everything for every person waiting in line. Class acts.

Drew is a Hamilton, Ontario based photographer who likes to think he can string two words together. His passion for music and photography is matched only by his love for his wife, dog and the Leafs.
RELATED ARTICLES
hamiltonholleradolive review