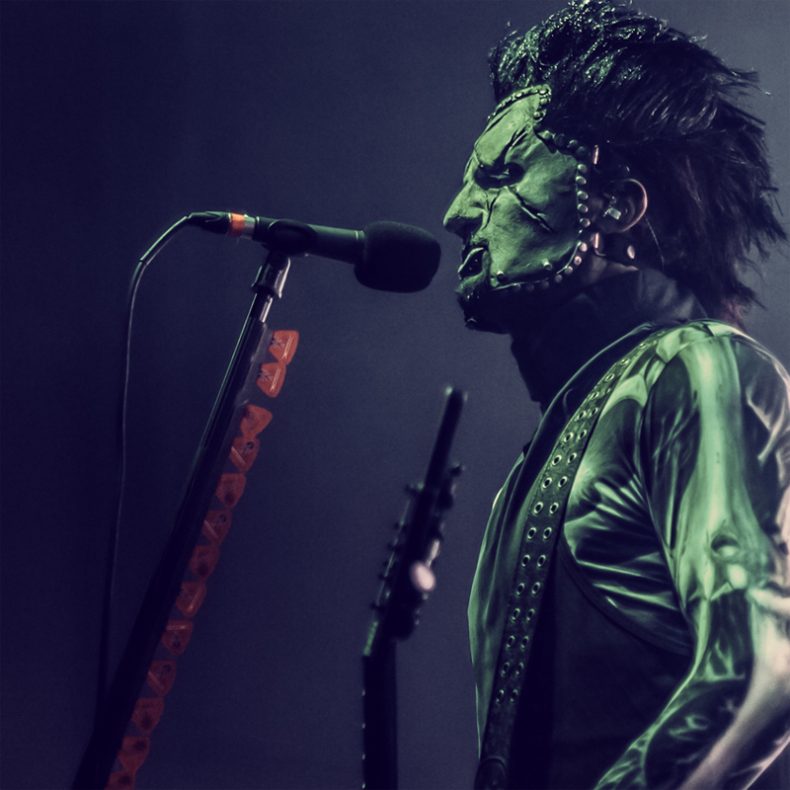 Raven Black kicked off the sold out, 5-band bill. The carnival of misfit toys welcomed incoming concertgoers to the show as they played through their short but twisted set. Black’s eerie, doll-like vocals stood out from the macabre backing instrumentation, performing each song with a different dark prop, and hula hooped through the last of the set-list as the crowd continued to grow.

Wednesday 13 took the stage under black-light and fluorescent paint, keeping the dark side alive with costumes and theatrics influenced by fringe religions like Voodoo and Santeria as well as The Godfather of Shock Rock, Alice Cooper. The performance seemed scripted but lacked climatic memorable moments that keeps concertgoers talking after the fact. The band utilized the available stage space but lacked enthusiasm, which may be by design. Technically speaking, the band left nothing to be desired and after their set, the chorus of “What the Night Brings” could be heard as attendees tried to shake the earworm.

Dope was… dope! Playing through their catalogue of singles, hits, covers, and fan favourites with the same energy and enthusiasm they had at the turn of the millennium. The band was a perpetual energy machine as they and the crowd fed off each other. At one point, technical difficulties got the best of Dope, Slade, and the boys but, like a true professional Dope saw it as an opportunity to reminisce on the unforgettable legacy Wayne Static left behind, sharing  how Static-X and Dope were kindred spirits from day one and how the two played the same shows for literally years. He reminded us all of just how old we truly are and how young we all still feel. Once the technical issue was resolved and without missing a beat, they jumped back into the set and fired up an incredible sing-a-along medley of anthems and a cover that left the audience dripping with nostalgia.

Mushroomhead’s set pieces, risers, and instruments left the seven-member crew little room to maneuver, but that didn’t stop the masked members from exploring every inch of what remained of the stage. They played their signature sound with an intense ferocity that was inescapable even in the furthest reaches of the venue. Two kick drums, a bassist, and two sets of additional percussion drove the spectacle, shook stomachs, rattled eardrums, and cleansed the rafters of old confetti. From the underlit water illuminating the drum heads, the menacing demonic masks, the addition of a special guest vocalist Jackie Laponza and her walking on the pit, as well as one of the vocalists wandering through the crowd as both guitarists mounted the twin drums, Mushroomhead’s performance was an impressive display of passion, fervor and incredible sound that those in attendance felt to their cores and won’t soon forget.

Excitement and anticipation hung in the air with a pinch of apprehension. No one who hadn’t seen Static-X on this tour knew what to expect. The band’s namesake and frontman has been gone for five years now. Tonight was our chance to celebrate Wayne Static.

The crowd roared as the lights dimmed and three figures silhouetted by LED displays entered. As the crowd lost their collective minds, they somehow got louder as Xero entered. Xero is our collective memory and spirit of Wayne Static. He looks and sounds just like Static and throughout the evening any apprehension about his ability to honour Static’s memory dissolved without a trace. Let’s face it, Jay, Fukudu, and Campos weren’t going to hit the road with a Xero that would disappoint. Far from it. His sound, his personality, his energy, his movement, his mannerisms, his hair. Only Wayne Static could have outshined Xero. This was a Static-X show. This was a Static-X.

Static-X feverishly and effortlessly plowed through their catalogue of hits and fan-favorites from their six studio albums for nearly 90 minutes. The speed, passion, and precision of the performance felt as if it were a show plucked straight from the 2000s, when Static-X was at its pinnacle. It was plain to see the comradery and synergy between them. The drive, the passion, the love and respect were apparent. Only Campos and Xero spoke and both took time to recognize their appreciation and love the fans have for Wayne Static and Static-X. It was a celebration of a life cut short; Wayne Static would be proud.

Scott was raised in southern Minnesota, attended the University of Wisconsin – Stout, spent some time abroad and currently resides in Minneapolis, Minnesota with his wife and their two daughters, only son and two dogs. Long time music lover and concert-goer, Scott has attended countless concerts and festivals since 1996. His fondest concert memories include meeting the love of his life at his first music festival. Sneaking into Linkin Park’s first Minnesota show. Hosting the second stage on the Projekt Revolution stop in Somerset in 2004 and pretty much every show he’s attended with his concert cohort, Scott. Yes, there’s two of them! As of late, Scott has started making memories and sharing his love of attending concerts with his children. Shinedown was his oldest daughters’ first show thanks to his cohort, The Interrupters was his youngest daughters’ first show. His son’s first show is still to be determined.
RELATED ARTICLES
dollhouselive reviewminnesota
8.0