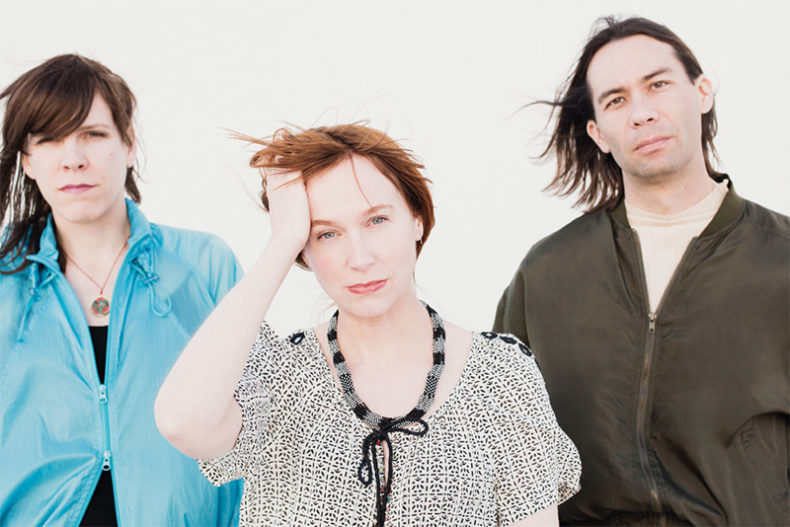 For the first time in over a decade, Wisconsin based band Rainer Maria has released a new album. The album is titled S/T, and includes nine new tracks written by the band. It was released just this past August and is being followed by a 23-stop tour. New listeners will find it easy to become hooked on their unique sound that is carried throughout each song on this album.

Opening act, Olivia Neutron-John offered a suspense-filled show that was as much about her choreography and performance art as the up-tempo beat, occasional bass guitar and lyrics. She would go minutes without movement to a pre-recorded tempo beat then suddenly pop out of her trance and sing into the microphone. She occasionally played the bass, with additional help halfway through her set by a human mike stand. Her set only lasted a few songs, but has left an impact on my view of performance art.

Rainer Maria presented themselves as  a friendly trio who graced the stage with high energy and friendly banter between songs. They stated how ecstatic they were to be back in Canada and mentioned how friendly they found us and how one cannot compare Americans to Canadians. They even politically charged the group a touch by mentioning how their America was trying to “blow up the world or something”. They opened the show with ‘Artificial Light’ from their third studio album, ‘A Better Version Of Me’, and ‘Suicides and Lazy Eyes’ from their latest album ‘S/T’ were played next. As the night progressed, the entire band kept the high energy they begun with, jumping around the stage, and projecting their good energy over the crowd.

Emily Nutson is a photographer currently based out of Sarnia, Ontario. Her profound love for music and the industry that comes along with it has greatly affected her photography and style. While drawing inspiration from her mentors she has been able to meld together both her own style and draw inspiration from those around her. When not immersing herself in music, Emily can enjoys venturing around South-Western Ontario to find new and unique locations for photo shoots.
RELATED ARTICLES
live reviewpolyvinyl recordsthe garrison