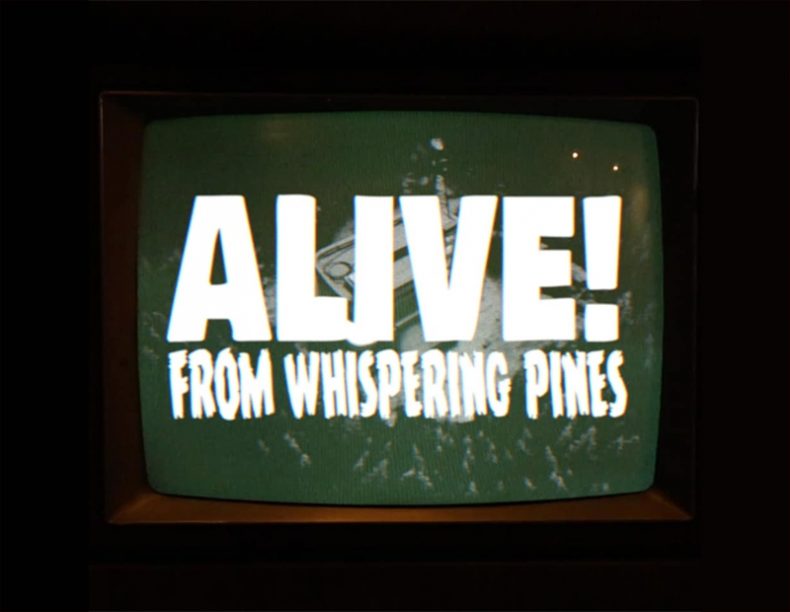 Lord Huron has never done anything simply. The Michigan quartet have now released three full-length LPs over the last ten years to slow-growing success, punctuated by the use of Strange Trails’ ballad “The Night We Met” on Netflix’s 13 Reasons Why. But the fans who stick around to see what’s beyond the music seem to be, for lack of a better term, utterly spoiled by extras. Prior to their latest release, Vide Noir, a geocaching campaign was launched where fans could scout natural parks or landmarks nearby and listen to a new song when standing in a precise location. That same album was also preceded by a 45 minute, 70s-inspired multimedia presentation of live music and some strange shopping channel happenings.

So, with a pandemic lingering on, it’s no surprise that Lord Huron has created Alive From Whispering Pines – a four-part virtual live show that will come once a month, where the band will play renditions of some old music, tease some new songs and mysteriously elude to what may come next. And this live music is presented in the vein of a late-night ‘live-from-our-studio’ television show you may have caught if you were having trouble sleeping on a Thursday night at 1AM in 1972. 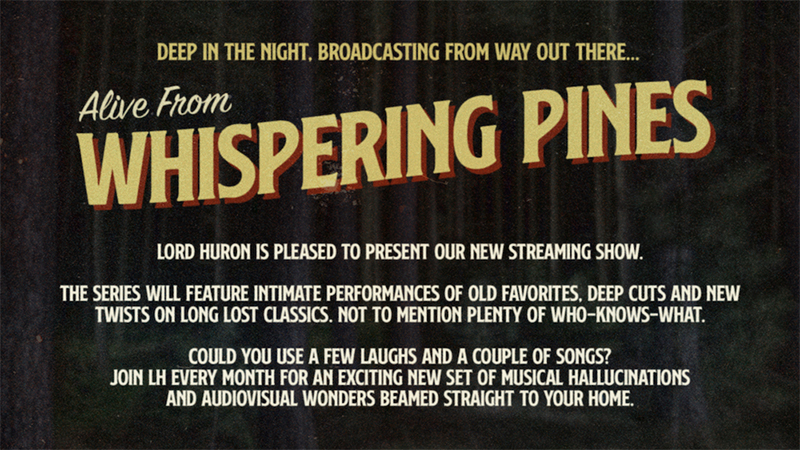 On January 7th the first instalment aired, featuring eight performances of songs spanning the band’s existence. Breakout performances included “Son of a Gun”, pulled from their 2010 EP Mighty and reimagined with a blasting harmonica added to the usually subdued track. Also notable was the slowed-down rendition of ethereal “Lonesome Dreams”, the title track of the band’s debut LP, whose dreamy indie rock layers yielded to a style more akin to a retro ballad Lindsay Buckingham may have conjured up.

Hosted by fictional cowboy-wannabe Tubs Tarbell, the show’s aesthetic follows Lord Huron’s usual brand of tongue-in-cheek nostalgia for yesteryear with a subtle twist of science fiction. An entire segment is devoted to going through the other fictional records recorded at Whispering Pines studios – where the anthropomorphic faces on those covers are blurred by some light spectrum effect. This leads to a commercial where we hear, what we assume to be, snippets of new Lord Huron recordings dressed up as these fictional artists – including Handsome Scott whose albums “Just some songs I know” & “More Songs I Know” are promoted. It’s all unusual but plays into the familiar quirk that Lord Huron has become known for. It’s fan service on high order, which feels fitting considering the viewers are likely all die-hards.

While the odd commercials serve as transitions and fun clues for a likely fourth LP, it’s the live music that steals the show. Kudos to the editing on this, as translucent images of the various band members are layered over one another while they perform, evoking old Western cinema. The songs, even originally upbeat tracks like “Meet Me in the Woods” & “Secret of Life”, are stripped down and performed in quieter, more sultry ways. This not only validates the experience for fans further but blends into the aesthetic seamlessly.

And while the energy that Lord Huron brings to stage can’t quite be adequately captured in this format, it’s more than worthwhile viewing for anyone who is itching for some live music right now. Alive From Whispering Pines episode one (or 423, as stated here) is a satisfying multimedia experience that leaves us looking forward to more.