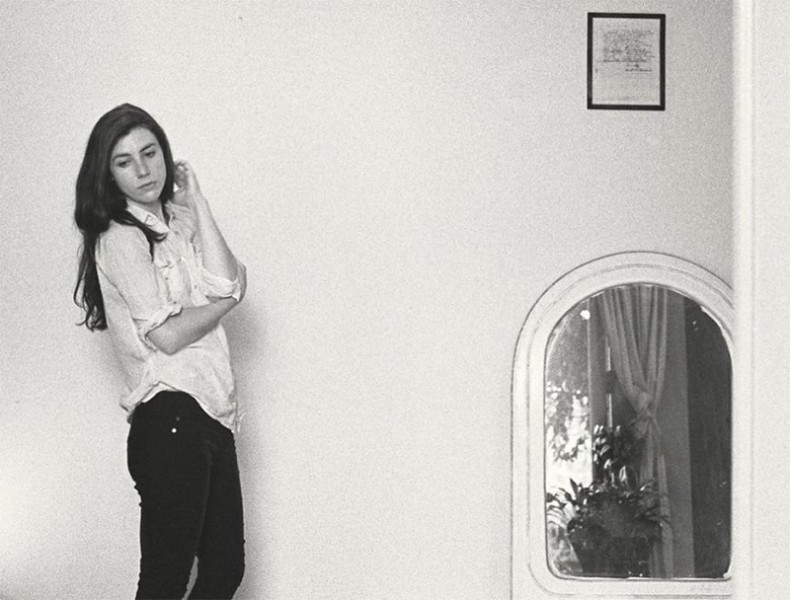 “The first time I played in Canada was two-thousand and…early.”

It was with a kind of coquettish sobriety that Julia Holter and co. strode onto The Great Hall’s stage, the building’s chipped, dome-ish ceiling baring fresh scars after a cathartic, bordering on shoegaze-y opening by Pennsylvania-born Circuit des Yeuz. The venue’s sold-out crowd occupied every spare seat and booth, both above and below the balcony.

Holter, dressed in elegant black and white, nursed a glass of white wine in one hand and tinkered on her Nord Stage 2 with the other. Flanking her, to the left and right, were Dina Maccabee on viola and the inimitable Devin Hoff on double bass. Sitting behind the three, characteristically unsmiling, ready to let loose his idiomatic, cowbell-accented rhythms, was Corey Fogel.

From moment one – a bit of light-hearted chatter to the effect of “Circuit des Yeuz says you’re a really nice audience” – the room elevated.

“Silhouette” served as the bright-yet-somber pallet cleanser before Holter gave the one-two-three and “Horns Surrounding Me” burst into life, reminding attendees why her previous album, Loud City Song, will forever be a member of this decade’s crème de la crème.
Then came “In the Green Wild”, which, with pout and panache, dropped “Am I too bored to understand?/Well good, I’m done/Off to the wild for me” and suddenly the show took off.

“Everytime Boots” maintained the giddy tempo before switching to the most spectacular piece of the evening: an elongated, beautifully rendered version of “Lucette Stranded on The Island”. Holter prefaced the track by saying “This is a song about a woman who gets stranded on an island and left to die, which happens to all of us, sometimes, in our own ways,” and, as she slipped into the skin of Sidonie-Gabrielle Colette, you couldn’t help but bite your breath at “Oh she’s been marooned/Can anybody help her?”

The next five tracks mixed newer material with refreshed and revamped deep cuts like “So Lilies” and “Goddess Eyes I” off of Tragedy (2011) and Ekstasis (2012), respectively. Finally, after a “Betsy on the Roof”/”Vasquez” jam session, the set drew to a close.

After a few minutes of hooting, hollering and sore-hand applause, Holter returned for an encore, the second and final song of which, “Sea Calls Me Home”, suffered from a lack of sax (Maccabee’s delay-pedal string work was swapped in for the solo). This was perhaps the concert’s only low moment, though the joviality and optimism of the preceding whistle-duet did very well to conceal that blemish.

It was a quick hour-and-twen’y. What impressed me most was the lushness and vivacity of the performance. Instead of churning out dull facsimiles of the scrupulous, scrupulous arrangements that comprise her discography, Holter paraded around the delicate beauty that four instruments and a voice can conjure up.

Hours earlier, well before Doors, and more out of boredom than rebelliousness, my friend and I snuck into the venue and eavesdropped as Ms. Holter rehearsed “Betsy” and tinkered with her keyboard.

In that vacant space, with senses heightened so as to avoid being caught, we heard her voice carve through the air, just out of sight, but not beyond ears. In that quietness, the elusive simplicity of Have You in My Wilderness seemed to be reborn. To invoke the pleading refrain from “Silhouette”: