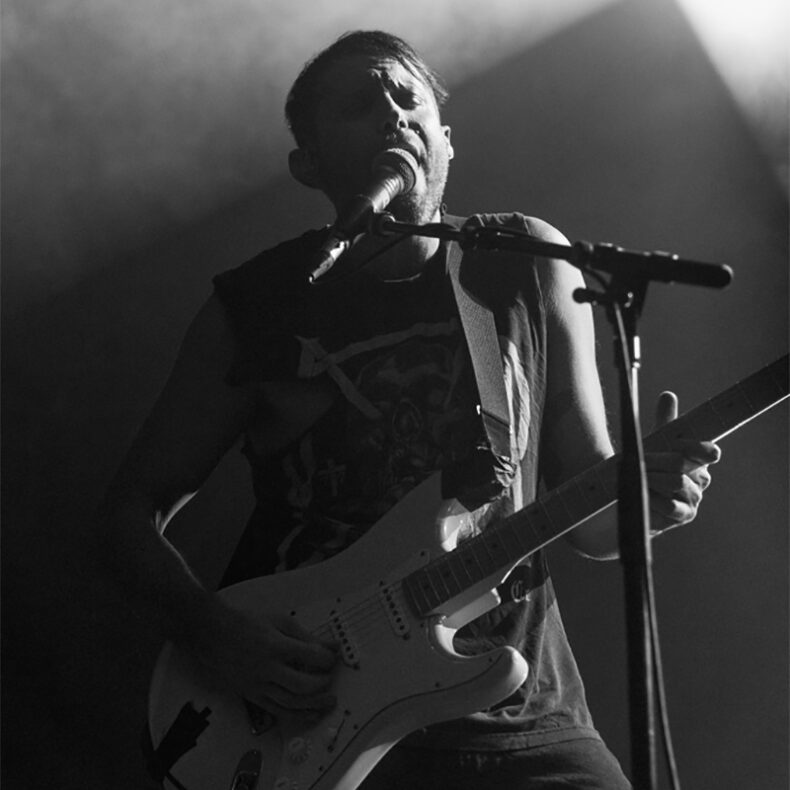 After passing through the lobby and entering the main floor, the sea of black clothing and dinginess couldn’t have paired better with the bass and neon lights coming from the stage. It felt like a scene right out of Cyberpunk which is exactly what you’d expect from L.A.’s Health.

After much anticipation, Health took the stage. Jake Duzsik’s vocals contrasted so well  the instrumentals, even more so than they do on the albums. The band create an amazing atmosphere and identity that is entirely unique and mesmerizing. You have to remind yourself to blink when you’re in the presence them live. Most of the crowd was dancing along but they were in their own worlds that Health has created for them, allowing them to be totally carefree and consumed.

Having recently collaborated with Street Sects and Perturbator on their most recent album they were the perfect bands to tour with because it allowed for them to play these songs together live which you would normally never be able to see, never mind in the same night.

About mid-way through their set, Street Sects’ vocalist Leo Ashline made his return to the stage to perform “The Joy of Sect” which was exceptional. Next, they went into “New Coke” followed by “Saliva” where drummer BJ Miller really shined. The track is so drum heavy already, but he brought so much more power to it live that it almost felt like a drum solo. The drums themselves sounded so good.

The band then went into two older songs. “We Are Water” which is a more instrumental, heavy song with little vocals, but it was very interesting to hear these songs live considering how much the band has improved since they were released. They’ve really been fine-tuned and sounded better than ever. They then played “Perfect Skin” which was a real highlight considering it’s from their first album. The energy between the short pauses of notes in the song was euphoric and the room would go completely dark during them as well putting the crowd in awe.

Perturbator came out to join them for their encore of “Excess” and what felt like a short but extremely satisfying set came to an end. Always leave them wanting more.