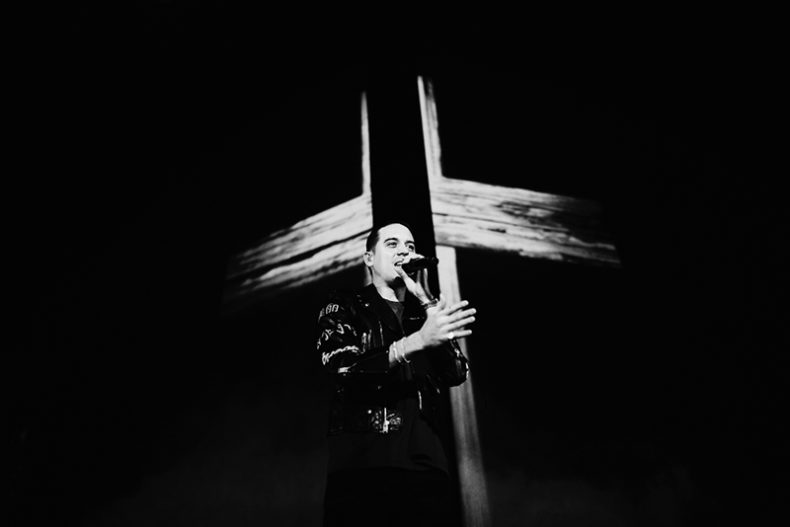 Since emerging onto the scene in 2008, Gerald Earl Gillum, better known as G-Eazy, has made waves in the hip-hop scene coming out of Oakland, California. Yung Gerald was able to break through into mainstream success after releasing his major-label debut album These Things Happen in 2015. With tracks reaching the Billboard charts, the hip hop scene had begun to pay close attention to the rapper from the Bay Area. Promoting his latest album, The Beautiful & Damned, which was released last year, G-Eazy brought the album title tour to Toronto for two sold out nights at Rebel Nightclub. I knew I was in store for a high energy and high production performance from Lights.

After great opening sets from Phora and Soundcloud sensation Trippie Redd, the jam packed crowd at Rebel were ready to see the man of the hour take the stage. As the clock struck 9:25, the lights went out, and the crowd erupted as a puff of smoke engulfed the stage, G-Eazy  appeared to the title track “The Beautiful & Damned”. He kept the high energy rolling, transitioning into “Pray for Me” and “Legend”.

Throughout his lengthy set, G-Eazy played tracks from his last major releases, and tended to stay away from material prior to 2014. Fans were treated to hits such as “Calm Down”, “Me Myself & I”, the radio smash hit “No Limit”, as well as material off his latest release.

Along with memorable stage antics, a cover of Marc E. Bassy’s “You and Me”, and just an overall fun performance, G-Eazy can be recognized as one of mainstream hip hop’s big names, as he continues to pump out tracks that chart highly on the Billboard Charts. It was my first time seeing G-Eazy, but it certainly won’t be the last.

The Spill Magazine is a Toronto-based online publication dedicated to covering the independent music scene with a strong focus on our thriving hometown talent. Our writers bring you up-to-date news, in-depth features on musicians and reviews for the latest CD releases. We also travel to the front lines for all local festivals including Canadian Music Week and North by Northeast. Don’t forget to check out our Facebook and Twitter pages for all daily Spill updates.
RELATED ARTICLES
g-eazylive reviewrebel