Earlier this week, on Brunswick avenue at the Tranzac Club, Folk Fights Back Toronto had its second event. The musician-led organization has launched a series of shows across North America, including events in New York City, Nashville, Boston, Chicago and San Francisco. Tuesday’s benefit concert was dedicated to immigrants and refugees with proceeds going to the Romero House.

The evening was a mix of classic folk ballads, Celtic tunes, country songs, and original works by a range of talented artists. Early on, Ivan Rosenberg spoke to the theme of the evening and the absurdity of feeling threatened by new immigrants, especially in his line of work, “My bluegrass gigs have been stagnant and I’m pretty sure it isn’t related to immigrants.” 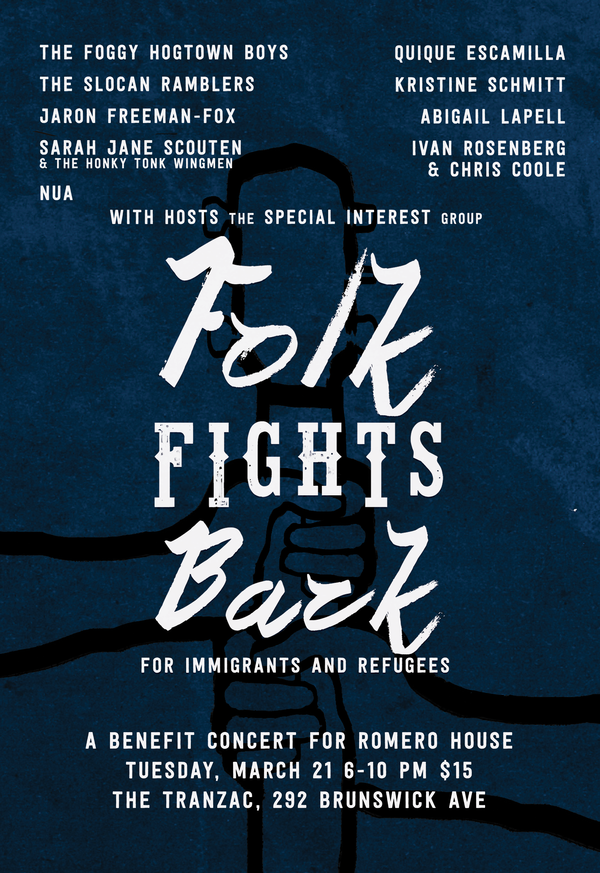 The night’s lineup featured hosts the SPECIAL INTEREST group along with Ivan Rosenberg & Chris Coole, The Slocan Ramblers, NUA, Abigail Lapell, Jaron Freeman-Fox, Quique Escamilla, The Foggy Hogtown Boys, Kristine Schmitt, and Sarah Jane Scouten. A crowd of about 200 packed the hall for the folk festivities. Bowls of gumbo were served and pints of beer were poured as the engrossed audience watched each act command the stage. The spirits of the evening were high, reflecting the talent of Toronto musicians and the desire to lend their voices and skill to an important cause.

As ongoing reverberations of the Trump presidency continue, events like this one offer resistance and conversation inside the uncertainties of a wavering political climate. The night was a celebration of solidarity and musical talent in keeping with the message of the folk tradition: that music has, and will continue to be, a force of resistance and community.

Elizabeth is a Toronto via Caledon writer whose rural upbringing left a lasting love of anything with a banjo and an upright bass. She scours Toronto venues for both the musical talent and the beers on tap.
RELATED ARTICLES
live reviewromero housetoronto