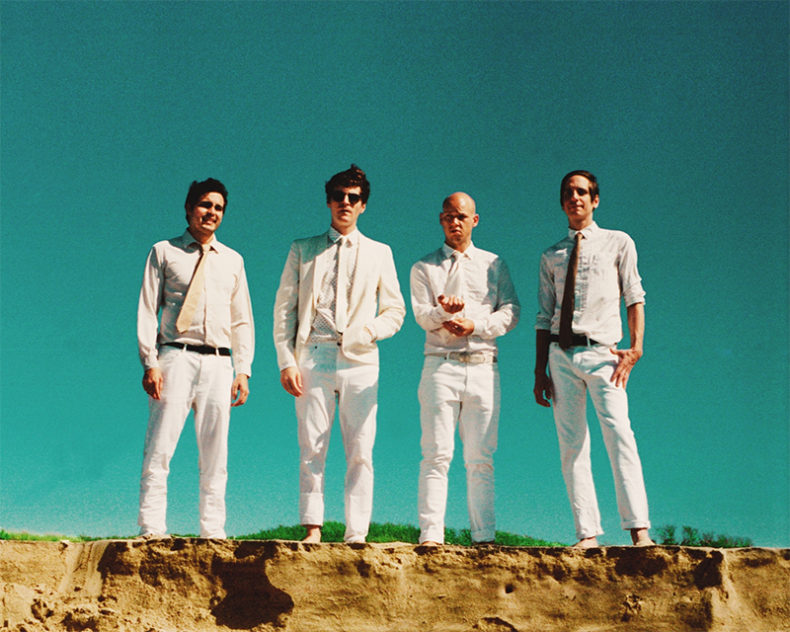 For the first time in three years, American rock band The Dig made their fourth stop in Toronto for their North American Bloodshot Tokyo tour.

The show was attended by about 50 loyal fans at the Velvet Underground on February 28th, an intimate venue known for new wave and punk acts.

Despite the hiatus by the band, one of their biggest fans from Toronto, known as Rob, told the band that he had been to the last two shows they had played in the city. In honour of Rob’s loyalty to the group, they dedicated two songs including a love song “Tired of Love” to the fan.

The majority of the show was new music from  the band’s new album Bloodshot Tokyo. This included some older tracks like “Cold Afternoon” from their 2013 EP You & I and “All Tied Up” from their 2015 album Midnight Flowers. It was a special night for the band, as it was singer David Baldwin’s birthday. Second half of the voice of The Dig, Emile Mosseri joked that it was actually Baldwin’s 19th birthday.

The most impressive part of the night was how well Baldwin and Mosseri’s voices blend together. There were moments when Baldwin’s voice had a smooth, angelic sound to it that I didn’t appreciate until I heard it live. It’s a much different experience seeing the pair live as opposed to hearing their record because you can tell whose vocals are on which track. The quartet brought a bigger sound than I expected which brought the album to life. They made the most of the album’s synths and deep bass tracks, with the hazy pale pink and blue lighting creating a tremendous atmosphere which worked for the band’s dreamy audio.

The only thing that seemed quite strange was the lack of connection from The Dig with the audience. Other than a shout out to their fan Rob from Mosseri, the rest of the band stayed silent during the show. Maybe it was a sense of disappointment due to the smaller crowd, or maybe the rest of the members are still a little shy. The crowd itself wasn’t very active, but the band did have some people dancing around.

It was a relatively short show with the band playing 16 songs and lasting about an hour.

The night ended off with two of the band’s more popular new songs. “Jet Black Hair” sounded better than the version which appears on the record and included a powerful bass solo from Baldwin. “Bleeding Love (You are the One)” was the very last song and Mosseri told the audience to “dance like it’s a Bar Mitzvah”.

The band made a quick exit after their last set, but hopefully they will grace Toronto with their presence again soon. As a small indie band, it’s never easy having to come across the border, especially for a smaller crowd, but their loyal fans were likely pleased with the outcome.

Josie is a student in her third year of Journalism at Ryerson University in Toronto. She loves going to concerts, exploring the city and often indulges in an endless stream of cat videos. She is also minoring in politics, but is completely unsure why.
RELATED ARTICLES
bloodshot tokyolive reviewthe dig
8.0