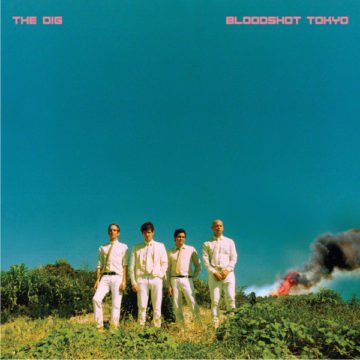 American rock band The Dig has released their latest album, Bloodshot Tokyo, and it may be their best one yet.

Bloodshot Tokyo is for those people who never knew that they loved the music of the 1960’s and 70’s. I have never been a big fan of music from this era, but this album made me reevaluate my musical tastes. The Dig has put a contemporary spin on psychedelic rock by using a variety of synths and crossing over to a more modern pop sound.

Although one of the tracks is titled “Tired of Love”, it seems that singing about love is all they plan to do on this album. It’s the overarching theme in the album, and almost every song has a different story or perspective on infatuation.

The first single from the album, “Simple Love”, is by far the best track, and it was the best choice for a first release single. It’s peppy and organ heavy, and a great place to start for new listeners. The entire album is fairly mellow and could easily be the new soundtrack to your morning coffee or evening wind-down. I wouldn’t be surprised to hear one of the tracks featured in the next indie romance film or playing in a local cafe.

If you are familiar with The Dig already, you will notice how much more upbeat this album is from their previous records, yet it is still relaxing. Although their older music was great, the happier sound is a welcome change for the band. The new sound could be attributed to the addition of drummer Mark Demiglio who seems to bring a modern pop vibe to The Dig’s more moody and slow side.

Fantasy is also a strong theme in the album, which includes both dreamy lyrics and sounds. “Jet Black Hair” has a distinctly folk sound and lyrically plays on the fairytale story of Rapunzel, but with a twist. In this story, they sing, “throw down your jet black hair”. This sounds like the Lumineers are rubbing off on the quartet, as they previously toured together. This track is one of my favourites because of the folk sound and the clever lyrics. It was also one of the first singles the band released from this record.

The band members say they found inspiration from music that was popular in the 60’s, like The Kinks, Harry Nilsson, Betty Harris and Parliament. While I haven’t had the chance to listen to these bands, I’m considering it.

As for why the album is titled Bloodshot Tokyo; that is still up for debate. The band has announced a North American tour scheduled to play 25 shows. This includes a stop in Toronto at the Velvet Underground on February 28th. If The Dig can bring the same level of talent and pep to their tour that the album has, I’m looking forward to being in the crowd.

Josie is a student in her third year of Journalism at Ryerson University in Toronto. She loves going to concerts, exploring the city and often indulges in an endless stream of cat videos. She is also minoring in politics, but is completely unsure why.
RELATED ARTICLES
album reviewsbloodshot tokyoroll call records