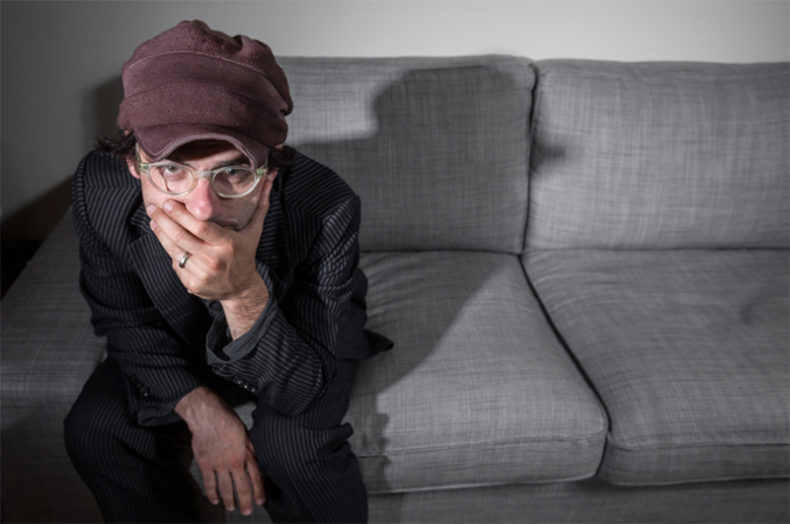 On March 7, Clap Your Hands Say Yeah (CYHSY) graced the silver confetti stage of the Horseshoe Tavern along with a solo set from Steady Holiday serving as the opening act. This show was part of a 3-month tour for CLYHSY, and a shorter tour for Steady Holiday. For CLYHSY, it was an opportunity to showcase songs from the band’s fifth studio album The Pilot to an audience more familiar with the repertoire of hit songs that they’ve developed over the past 12 years. For Steady Holiday, the show was an opportunity to step into the limelight with her own personal project after providing support to the likes of fun. and Fitz and the Tantrums. Both performances brought out the enigmatic characteristics of the two bands, which sent me home with a thirst to know more about their quirky personas.

Steady Holiday started the night off with a modest solo-set of lullabies. From what I understand, Dre Babinski – the frontperson for the band – usually does have a back-up band, but for this night she played guitar and violin overtop tracks stored on her phone. She was clad in a rich ensemble of eccentric patterns that fell loosely over her small frame; her black hair mysteriously floating in a bun on top of her head. The songs were often composed of Babinski’s soft, treble voice, and a standard suite of rock instruments (drums, bass, a guitar playing chords, etc). When she wasn’t singing, Babinski would fill in the space with wavering guitar or eerie violin. The melodies were catchy and drowned out like an old wind-up music box, creating a feeling of slight delusion like we were clinging onto memories of innocence in a decaying world. Her lyrics, the style of music, her attire, and her disposition all resonated together to convey a genuine soul that remained child-like despite living in a cruel, chaotic world. Her calming allure was easy-listening as I languidly sat in the back of the Horseshoe; her performance left me eager to experience Steady Holiday with the full support of a back-up band.

When CLYHSY walked onto the stage, the crowd was immediately woken up out their daze: some let out an excited cheer, some propped themselves up to sit on top of the benches in the back, and most rushed to get closer to the front. Alec Ounsworth – the lead singer/songwriter – has been known to jump between genres in his songwriting, and this set was no exception. His frail voice carried the band through synth-heavy rock, blues-y waltz, quiet folk, athemic post-punk, and everywhere in between. Most of the crowd were in their late-20s to mid-30s; it seemed that these were people who became devoted to the band after their first album in 2005. The first two songs were not well-known; for these, the crowd watched patiently with some shuffling around. When he wasn’t playing guitar or violin, Ounsworth used his hands to shade the harsh stage lights so that he could better see the crowd. In past interviews, Ounsworth has stated that he prioritizes fan engagement in live shows, so perhaps this was a way for him to survey the reception of the band’s new album. When the band started playing “In This Home on Ice” the crowd immediately livened up – clapping and singing along. After this song, the music became the strings that controlled the puppet of an audience; when the synths and drums signalled a dance-able song, the crowd danced; when the harmonica and guitar signalled a slow ballad, the crowd contemplated. However, this puppetry worked against them when the band played an anthemic rock song towards the end. It seemed that some people felt the triumphant quality of this song signalled the end, and left two songs early. As CLYHSY continues their tour, hopefully their fan-base will become more familiar with their well-received recent album The Pilot, and will stick around until they’ve heard the very last song.

Raised among downtown Vancouver’s thriving underground indie music scene, Josie moved to Toronto to study architecture and to check out the self-titled “music city.” She is now on the hunt to find the intersection of music and the built environment, and thrives on exciting collaborations with creative individuals.
RELATED ARTICLES
clap your hands say yeahlive reviewthe horseshoe tavern
9.0

by Ljubinko Zivkovic on January 29, 2021
Clap Your Hands Say Yeah New Fragility CYHSY, Inc./Secretly Distribution For a while now, we haven’t heard much about Clap Your Hand Say Yeah. There could be a few [...]
7.0