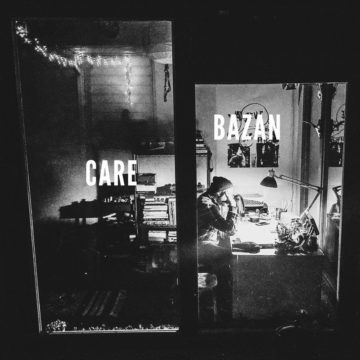 This is an interesting album, with an even more interesting title.  Care.  Simple, but also direct, almost an order.  The theme of this album, spread throughout the lyrics is care…care for yourself but also, perhaps more importantly, care for others.  An interesting concept in 2017 where there does not seem to be a great deal of caring going around the world.

Bazan has not created a protest album, or overtly political, but then again, some would argue that politics begins with the individual,  I think David Bazan would make that argument.

The album is a sparse electronic album.  Not danceable, not overly pleasant, rather dark and brooding at points, but never boring, nor does he do anything without good reason.  Co-produced by Richard Swift (who produces and plays with Damien Jurardo, an old friend of Bazan) who brings his ability to use sound to create atmosphere to the album.

Bazan has released a great many records with his previous bands (Pedro The Lion and Headphones) and solo.  He has learned over the years and this seems to be the result of his many collaborations and history.  The album creates mood and feeling, not easy task with a synth based album, yet Bazan and Swift manage it.

“Without a word, you made coffee for us both, without thinking, I sat down and made a joke” Bazan sings in “Inner Lives” over a synth based melody with a toy piano-like synth picking out the melody “The way you laughed at me threw off a little spark, and in an instant I remembered who we are” he finishes the verse.  Bazan easily hits the nail on the head with relationships;  perhaps taking each other for granted, but really we need more Care.

At times a deeply personal record, and at times a call to arms (arms to hug that is), and Bazan acknowledges that it is not always easy.  Even couples have rough patches, as does the world.  “Keep Trying”  is an excellent example — love needs work, compromise, understanding…you have to keep trying.  This is his message to the listener.  Whether in a relationship or the larger scheme of things, keep trying.  A pleasant, intelligent message for the times.

Born and raised in Whitby, Aaron discovered music through his love of The Beatles. This led to a career in radio, writing for various publications, and ultimately a radio show about The Beatles (Beatles Universe), which ran for over four years. When not immersed in music, Aaron enjoys spending time with the loves of his life -- his wife Andrea, and daughters Emily and Linda (all of whom have an intense love of music too).
RELATED ARTICLES
album reviewscareundertow
9.0