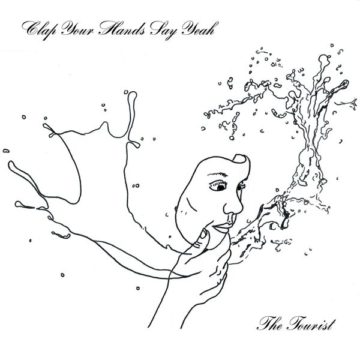 Since their 2005 debut, Clap Your Hands Say Yeah haven’t had much to get excited about. They’ve gone through growing pains and the loss of band members, until the band truly was the sound of one hand clapping – that of lead singer/songwriter Alec Ounsworth. Widely panned, I happened to really like their debut album, Clap Your Hands Say Yeah. Truth be told, when asked what kind of music I like to listen to, I’ll tell you I like “either songs that tell stories (enter my 30+ year Bob Dylan obsession) or quirky music.” That first album definitely fulfilled the latter.

There haven’t been many successes for the band in subsequent years. Only Run was conceptualized as most of the band left, and that album sounded as disjointed as you’d imagined it would. In contrast, this album, The Tourist, is just as good, if not better, than their first.

Gone is the unsure sound and a track listing that felt thrown together. The Tourist is more confident and ultimately very enjoyable. It is also an album of stories – Ounsworth has said The Tourist was written during a difficult period in his personal life, and his lyrics allude to ambulances, drugs and “visiting hours.” “Ambulance Chaser” is quite intimate, bringing out feelings of hope amongst despair. It is obvious that there is pain in the song, and it brings you to care for Ounsworth, willing him to do well. “There’s a limit to how much I can endure/I’ll take my medicine and you’ll just hope for the worst.” Don’t get me wrong – this isn’t an album of doom and gloom, not at all. In my favorite track of this album, “Vanity of Trying”, we are reminded that “We can be whatever, whatever, whatever we want,” while lush melodies swell up behind Ounsworth’s raspy vocals.

Alec Ounsworth has returned to and embraced his eccentricity on The Tourist and it’s easy to join in his experimental flourishes. He is, in fact, “the pilot.”

If you were a fan of Clap Your Hands Say Yeah back in 2005, and may have become a bit disenchanted with them in the past decade, this is the album you were waiting for, and knew CYHSY has still capable of. I recommend giving them another try.

Lucy Rendler-Kaplan is a native Chicagoan, recently returning home after 10 years in Los Angeles. Having worked in field marketing for the past 17 years, Lucy recently left corporate America to work as a consultant. When not running, Lucy can most often be found out with her dog, watching an NFL game, or listening to live local music. Passionate about writing, Lucy enjoys writing about music in lieu of playing it.
RELATED ARTICLES
album reviewsclap your hands say yeahcyhsy inc.
10