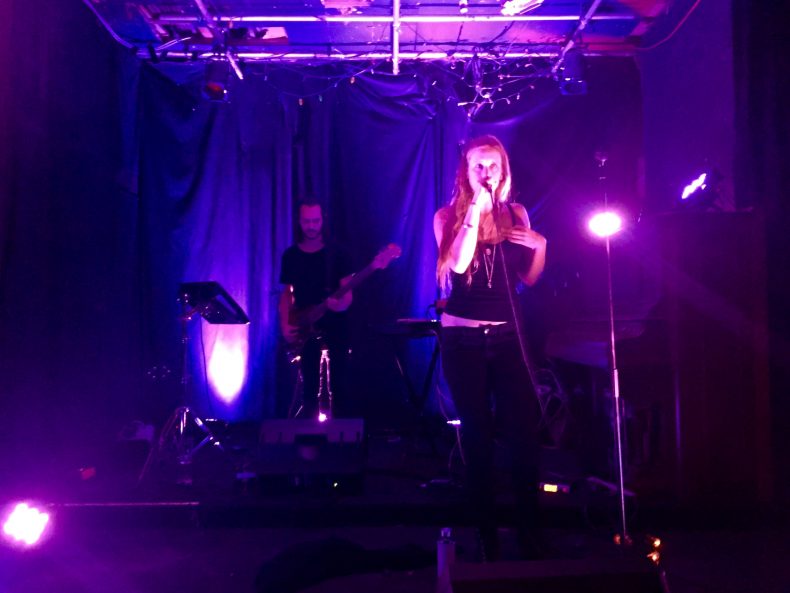 Toronto-based musician Alina Libkind is the opener for Bad Willow at The Cameron House Back Room. She begins her electro-pop set at 9:45pm, with clear musical influences from artists such as Lorde, Lana Del Rey, Grimes, and Milk & Bone.

Bad Willow lit up The Back Room in more than five shades of pulsating coloured lights, going strong from 10:30p.m. – 11:30p.m. The lights and plant-covered ceiling complemented the hip vibe at The Cameron House, flooded by an energetic and young crowd awed by the performance. Minimalism was at the forefront of the show, as the stage was equipped with a microphone, drum machine, and laptop.

Formed in 2015, Bad Willow is an electronic duo based in Toronto – Julie Title on vocals and Mike Kirsh on the drum pad, synth, and electric bass. Their shared passions for music inspired by bands such as Portishead, Massive Attach, and Purity Ring led them to collaborate after their paths crossed in Toronto’s music scene.

Their style is definitely unique, bringing in the perfect blends of musicality from each of their talents. As quoted in their bio, “Julie’s thought-provoking lyrics draw upon her experiences of sexuality, madness and queer identity, and are crafted with a modernist, imagistic writing style.”

The set list included “Mercury,” “Rise,” “Unwind,” “Higher,” “Fire,” “Call It On,” “Glory Box,” “Dirt,” “Jóga” (Björk cover), and “Ringer.” These songs are definitely not easy ones to sing. Title gave it her all and emitted a powerful and impressive range throughout the show, while Kirsh maintained the steady percussive beats. The variety of instrumentation played in this set demonstrated the precision in the orchestration of each tune intricately weaved together.

After a few months of songwriting together, Bad Willow teamed up with their good friend and Juno-nominated producer Mike Wise (USS, Lights, Allie X, and Trevor Guthrie). Already, with their first song catalogue, Bad Willow was chosen as one of the top 15 bands of Canadian Music Week to play an advanced showcase. On top of that, they were selected to open for METRIC’s Joshua Winstead. Title and Kirsh’s combination of raw lyrics and haunting melodies with infectious beats creates an eerily harmonious new electronic sound.