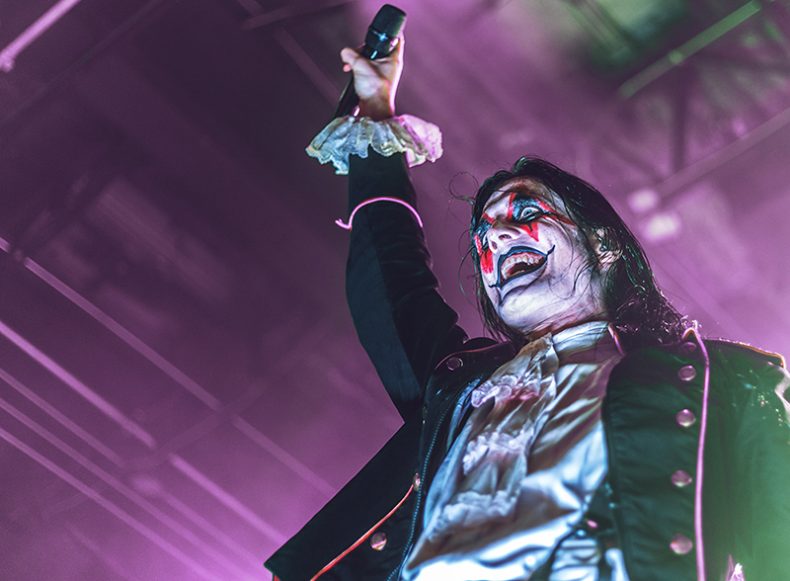 A large thunderstorm rolled past just north of MYTH LIVE in Maplewood (Saint Paul), Minnesota as the line for entry formed across the parking lot and into the next. The rumble of thunder and the lightning amongst the clouds were no match for what AVATAR had in store.

They opened their 45-minute circus stylized set with “Hail the Apocalypse” and immediately frontman and ringmasterJohannes Michael Gustaf Eckerström led his bandmates — drummer John Alfredsson, guitarists Kungen and Tim Öhrström, and bassist Henrik Sandelin — in the sideshow that is AVATAR. The tightly choreographed lightshow and head banging allowed each member their time in the limelight and creative license throughout the set. Johannes’ commanding presence encouraged crowd participation with call and response and mimicry-type interactions that included chants and fist pumping to which the crowd gladly obliged.

As the show began to come to a close, the frontman alluded to their time running out, to which the crowd began cheerfully demanding, “One more song!”, over and over. He responded with, “Saint Paul! If we don’t go away, how will you miss us?”, which appeased the crowd.

The MYTH erupts! The moment they had been waiting for had arrived. “If they say we sound like a freak show.” he exclaimed through the roar of the crowd and kicked off their final song of the night “Smells Like a Freak Show”.

As the set came to a close, Johannes requested the crowd take care of themselves and be kind to one another before once last call of “We are…AVATAR!” the crowd responded multiple times growing in volume until the animated ringmaster and his intense supporting musicians left the stage.

Only a longer set could have made their performance any better. From the costume design and makeup, to the sound and lighting, AVATAR is a band that has the potential to turn their sideshow into a full-fledged three-ring circus. An event I recommend experience at least once.

Scott was raised in southern Minnesota, attended the University of Wisconsin – Stout, spent some time abroad and currently resides in Minneapolis, Minnesota with his wife and their two daughters, only son and two dogs.Long time music lover and concert-goer, Scott has attended countless concerts and festivals since 1996. His fondest concert memories include meeting the love of his life at his first music festival. Sneaking into Linkin Park’s first Minnesota show. Hosting the second stage on the Projekt Revolution stop in Somerset in 2004 and pretty much every show he’s attended with his concert cohort, Scott. Yes, there’s two of them!As of late, Scott has started making memories and sharing his love of attending concerts with his children. Shinedown was his oldest daughters’ first show thanks to his cohort, The Interrupters was his youngest daughters’ first show. His son’s first show is still to be determined.
RELATED ARTICLES
live reviewmaplewoodminnesota