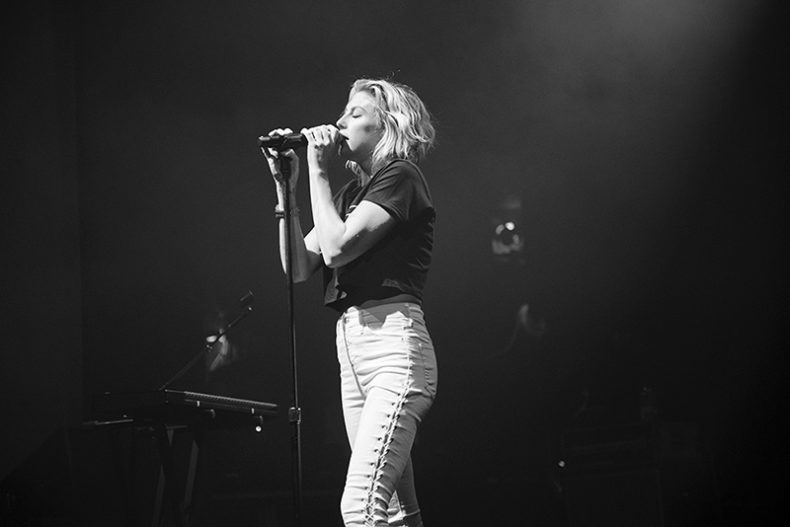 First it was Death from Above 1979, now Phantogram, next is Post Malone. Over the summer, Aurora has been putting on some of Toronto’s best summer concerts. The dynamic New York-based duo were the latest artists to be given the Aurora treatment, and for those lucky enough to win tickets, it was truly a special night.

The atmosphere in the room was electric. Fans were treated like VIPs throughout the evening. Custom drinks were available at the bar and fans had a chance to make one of a kind videos to share all over social media. Aurora put in the extra effort to make sure everyone could be entertained while waiting for the main act to hit the stage.

If you haven’t been lucky enough to see Phantogram yet, you need to change that. The indie rock duo has put together one hell of a live show. The group brings so much energy with them to the stage it is almost impossible to look away. Josh Carter’s guitar sounds heavy and keeps the rhythm of each song moving forward. Lead singer Sarah Barthal, meanwhile, effortlessly switches between bass and vocals only. It’s an interesting dynamic that helps keep the show moving at a fluid pace. It’s great to see when bands are willing to experiment with lineup changes during the set. It showcases not only the artists’ range of talent but also their willingness to try new things on stage for the sake of their fans.

The set-list featured their latest release, 2016’s Three, quite heavily. The highlight of the show came when the band played that album’s biggest single “You Don’t Get Me High Anymore” during the encore. The band went insane on stage, flinging themselves from one end to another. The illuminated wristbands Aurora had given to every audience member filled up the Danforth like a night sky.

Once the show was over, Barthal invited her Instagram-famous pup, Leroy The Good Boy, on stage to help the band say good bye. The audience cheered along, and the band was able happily spend another five minutes on stage. But based on the reaction, no one would have been upset if Phantogram had stayed on stage late into the evening.

Photographer by choice, writer by necessity. Since moving to Toronto in 2011 Morgan has become an active member of Toronto’s music scene. On any given night he can be found at various venues with his camera in hand. There’s nothing he loves more than exploring all the venues this wonderful city has to offer, discovering new bands and genres along the way.
RELATED ARTICLES
live reviewphantogramsomeday