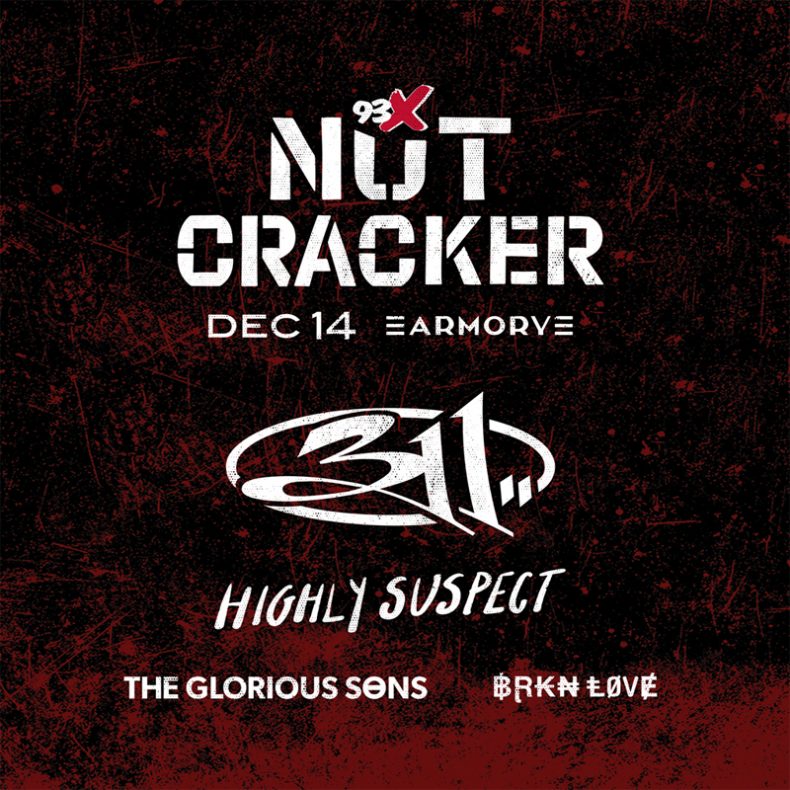 BRKN Love performed as if they were the headliners of the somewhat semiannual 93X Nutcracker. They took advantage of every minute of their time on stage. The five or six song set was met throughout with cheers from the audience. BRKN Love has started to make a name for themselves in the rock scene with their blend of hard and classic rock with soulful southern seasoning. This was not the last we will see from BRKN Love.

The Glorious Sons frontman, Brent Eammons,  appeared onstage barefooted and wearing a long faux-cheetah jacket, and a stage presence reminiscent of Joe Cocker. Die-hard fans were amongst the locals, and many lined the barricade to catch a glimpse of these huge Canadian rockers. Little encouragement was needed to incite singalongs with their hit singles. There was little on-mic banter from the vocalist, and even less off-mic between the members, but they all seemed to be in good spirits. The Glorious Sons put on a no-nonsense show that only could have been improved upon with a longer set. They definitely left the crowd wanting more.

The growing crowd was primed and amped for Highly Suspect. They took the stage to “Can You Feel the Love Tonight”, and sang along with the crowd until breaking into their first song. The band lived up to the album title aptly named MCID (My Crew Is Dope). By their fifth song, crowd surfers were spotted and an abundance of lighters and cell phones were being waved in unison. Sipping from a bottle, frontman Johnny took time to address the crowd to shed some light on mental illness and the grip it has on the majority of the population. The members re-emerged for the second guitar-less, rap style song of the night. Highly Suspect bring elements of hard rock, hip hop and nu-metal to their set in a way that speaks to the fans and widens their following with every release. Their breakout single ”Lydia” was the only thing missing from a near perfect set.

311 wasted no time getting the crowd involved, playing two big hits in the first three songs, “Beautiful Disaster” and “All Mixed Up”. Backed by looping visuals depicting abstracts, fractals, animated album art, dancing member silhouettes, and aliens singing along with the vocalists, they displayed their showmanship and musical prowess from start to finish. Drummer Chad Sexton performed a prolonged drum solo while stagehands reconfigured the stage for a percussion breakdown. Bass drums and gongs for each member. The Armory shook with the thundering sounds of a rhythm of 10,000 infantrymen, filling the atmosphere for 75 minutes with hit after hit, deep cuts, new songs, and fan favorites. 311 continues to deliver exceptional performances show after show for nearly 30 years with their original lineup.

Scott was raised in southern Minnesota, attended the University of Wisconsin – Stout, spent some time abroad and currently resides in Minneapolis, Minnesota with his wife and their two daughters, only son and two dogs. Long time music lover and concert-goer, Scott has attended countless concerts and festivals since 1996. His fondest concert memories include meeting the love of his life at his first music festival. Sneaking into Linkin Park’s first Minnesota show. Hosting the second stage on the Projekt Revolution stop in Somerset in 2004 and pretty much every show he’s attended with his concert cohort, Scott. Yes, there’s two of them! As of late, Scott has started making memories and sharing his love of attending concerts with his children. Shinedown was his oldest daughters’ first show thanks to his cohort, The Interrupters was his youngest daughters’ first show. His son’s first show is still to be determined.
RELATED ARTICLES
311brkn lovehighly suspect