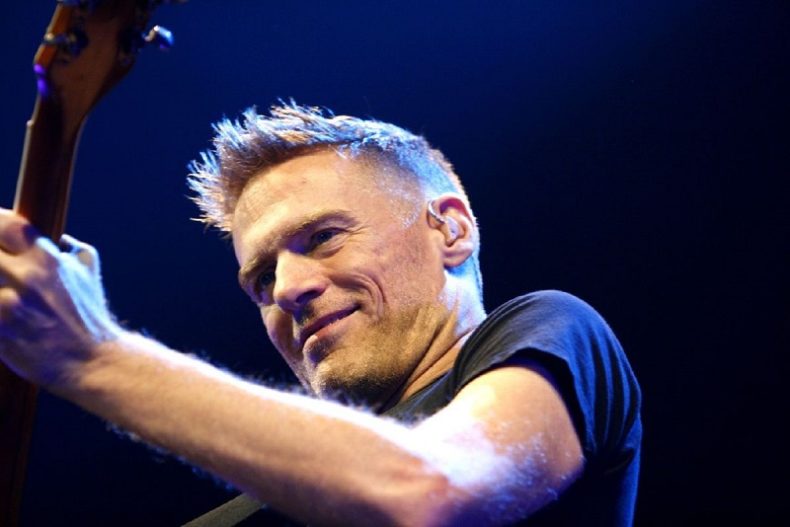 The first day of Bluesfest is a real hit or miss when it comes to the crowds, especially when it’s on a weeknight at the end of a record breaking heat wave. With Bryan Adams being featured in the headlining slot on the first night this year, the turnout was definitely large, although the crowd’s interaction was pretty disappointing. Adams really had to work to get the crowd to interact with him and that’s quite shocking, seeing as he is one of the most celebrated names in Canadian music.

While he’s played Ottawa many times and put on a spectacular show at the NHL Classic 100  just last year, Ottawa has shown its native son much warmer welcomes than they did last night. Despite the crowd not giving him much ammunition, he still put on a well oiled and personal set that ran through most of his fan favourite hit songs. The screens surrounding the stage and in the middle, placed as a backdrop, were in sync with every song – most notably for “Summer of ‘69” with the lyrics tattooed onto a woman’s body and “18 ‘til I Die” with the the track title following his words on screen. With a catalogue like his, it’s hard to fit everything into one set, but it was undoubtedly surprising that he didn’t play “In The Heat Of The Night”. The encore was quite unique, as he played mostly covers. He came back onto stage with “I Fought The Law”, and continued into covers of older rockabilly and traditional irish folk songs. Of course fans didn’t stay quiet during songs like “Born to Run” and “Summer of ‘69”, or when he made shoutouts to Ontario – but overall, Ottawa needs to wake up for the rest of Bluesfest and kick it into the high gear that usually breaks out as soon as the festival starts!

I Fought The Law (The Crickets Cover)
C’mon Everybody
Whiskey in the Jar (traditional Irish cover)
Straight From The Heart
All For Love (Bryan Adams, Rod Stewart & Sting cover)

Music makes the worst situations bearable and the best situations even better. I'm just here to share the inside scoop and anything you may have missed, while I establish my own voice in the industry. Born and raised in Ottawa, I never go anywhere without a set of headphones. Live music has been my vice for as long as I can remember and sharing stage side stories is a major bonus.
RELATED ARTICLES
bryan adamsfestivallebreton flats