SPILL FEATURE: THE UK’S AMERICANA SWEETHEARTS – A CONVERSATION WITH JD & THE STRAIGHT SHOT

Features
1
174
previous article
SPILL NEWS: AC/DC GUITARIST AND CO-FOUNDER MALCOLM YOUNG PASSED AWAY AT 64
next article
SPILL FEATURE: ALL BANDS ON DECK! - 2018 KICKS OFF A TRIO OF SAILINGS FOR MUSIC LOVERS 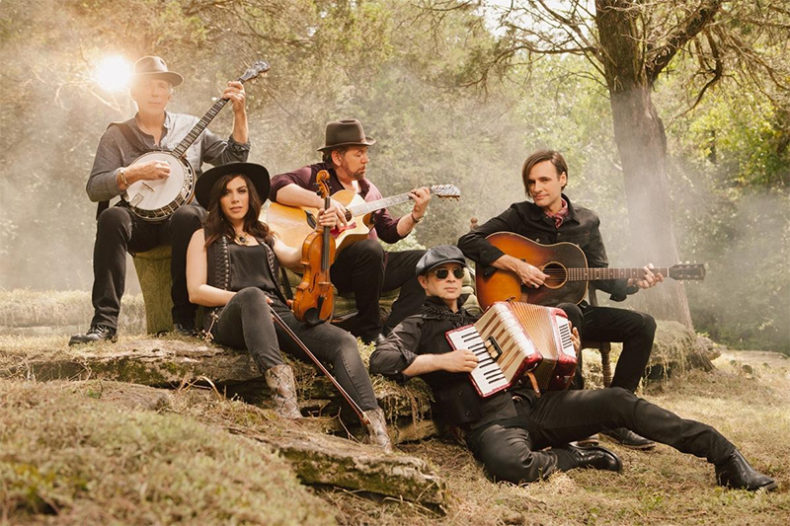 A CONVERSATION WITH JD & THE STRAIGHT SHOT

Good Luck And Good Night was conceived as an all-acoustic record and was produced and mixed by Copely (Toby Lightman, Owen Danoff, Upright Man) and engineered by Chuck Ainley (Mark Knopfler, George Strait, Lee Ann Womack) at the famous Soundstage Studios in Nashville. Frontman Dolan says, “We pushed ourselves harder than ever before on this album and are so proud of the new music.” Influenced by artists like The Beach Boys, Pink Floyd and The Beatles along with traditional Irish folk music and classical music, Good Luck And Good Night delivers a huge sound steeped in the quiet fire of American roots music and the swagger of rock n roll.

After seeing them deliver an incredible support slot to Don Henley last year in Manchester, I was fortunate to be able to catch up with three members – Jim, Marc and Erin when the band was in London doing some album promo for the new release. The band always seem to be on a constant touring cycle which had me wondering about their creative process. When did they get a chance to write and record? JD explained that their writing and recording process had really kick-started once the tour with Don Henley was wrapped up that the band. They had gone down to Nashville and spent a lot of time working on it with band-mate Marc producing for the first time.

Had the additional responsibility of the producer role been difficult for Marc to take on board in addition to also being one of the creative musicians playing on it? Marc explained that since coming from New York City, he had moved down to Nashville with his wife and built a little studio in their house. Considering they had previously been without a house, they found it quite a challenge to actually create a studio space in their home. Jim and Erin came down to his place and they wrote a song. He then mixed the record and cut a couple of vocal overdubs for the latest album. He described it as “a cool process” 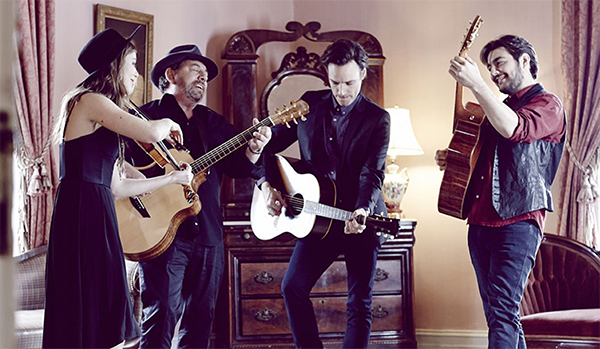 What exactly brought the Nashville-based band to London for their album promotion? JD explained that the band had made several previous trips to London and that it had become their adopted second home. They always stay in the same place and they all love London stating that “It’s a great place to base out of. So, I mean I guess that’s why lots of people come to London and we’re the same way. The food, the history, the nightlife and the people.”

With so many musicians in the band, I sought to identify how the overall creative process operated in terms of the song composition and how they are actually put together. The band members all agreed that it was an equal process with no defined leaders and that it was quite a musical democracy that operates with everyone contributing. JD jokingly stated “If they don’t we kick them out.”

On doing my interview prep, I was quite surprised that the band was now on their sixth album release. As the band has a relatively low profile in the UK market, I wanted to find out if the band felt that they basically had to set out to establish the band’s name with each subsequent release. JD responded that it was possible to draw a pretty definite line between records.

JD explained that the albums illustrated a transition for the band from being electric New-Orleans blues-based into more of an acoustic sound. He felt that the new record illustrates an arrival at the acoustic sound that they had been striving for. He shared that the band would expect to do a quick follow up release to continue to develop their sound further in that particular direction.

Rather than the band re-establishing itself, he instead saw it more as a progression or an evolution. He indicated that there had been a gradual establishment of a fan base for the band particularly over the last three records. stating that their fan base had been quite pleased with the direction of the band.

Of course, this following has grown some significant high-profile support slots. He agreed stating that was the whole idea of doing support. The object was to get people to hear the music live, as essentially that is what JD and the Straight Shot are – “very much a live band”. He explained that people who know the band have said to them that they enjoy the live performances even more than they enjoy our record. This being why they want to get out in front of as many people and give them that experience as they can. 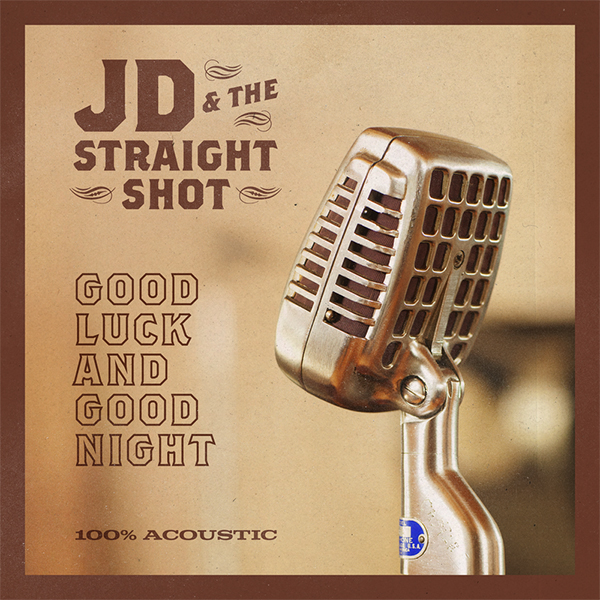 Once again with the new release the band had decided to include a couple of cover versions. This seemed to be a continuous thing with the band and I wondered why with such a boundless well of song writing creativity within the band, they choose to pursue this course of action with their album releases. Marc explained “Since I joined the band we’ve done a cover song on every record. Jim had suggested ‘Man, you know the song “Shambala” that Three Dog Night did?” Marc actually confessed that he didn’t remember it at all. The song predated him but when he actually looked it up, he did recall it from times with his parents. It was then that he felt the song was just perfect for the band, as far as the harmony type arrangement to it, the groove and the way it sits on acoustic instruments. Marc continued with explaining how their other cover, a Glen Frey song, was more of a tribute to Glen after their nearly 50 shows with the Eagles.

What was their thinking in doing a cover version? Were they staying faithful to the original or were they purposely trying to deviate and put their own spin on it? Did doing cover versions on each release present a moral dilemma? Marc tried to explain that “You look for the bones of the song… And to see if it matches up with what we do, and I think when we heard “Shambala” we recognized it immediately as having the same kind of bones that we’ve got.”

With their upcoming tour with legendary US act, the Doobie Brothers, were they seasoned with mixing with rock and roll royalty or was it something that they still found difficult to come to terms with? Marc explained that it was a bit of both. He recalled first meeting Billy Payne before their first set with the Doobie Brothers (they have since played ten with them). Payne was one of Marc’s musical heroes dating back since Payne’s Little Feat days and he couldn’t help feeling a little star struck. They had the opportunity to have a nice chat, and since then, the band feels comfortable with the Eagles/Doobie Brothers and the other legendary bands that they had toured with. “They’re incredibly supportive. All those bands had actually taken their time to listen to our music and give us helpful hints and encouragement.” Marc summed this up by stating “As an artist, that’s the most you can ask for and they’ve been great.” 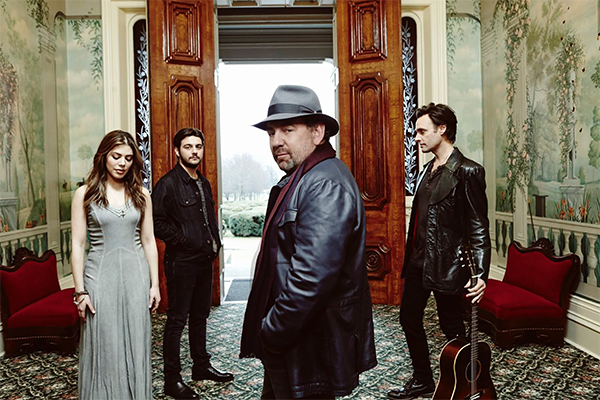 I always am keen to discover how musicians first developed an interest in music and what were the trigger factors that led them actually choosing it as their particular career path. The band fiddler, Erin, who had been largely quiet during the interview, chimed in:

“Well I just can’t remember a time in my life that I didn’t play the violin.” She elaborated by explaining how she had been three years old when she started out continue on to pursue classical training. Her father had been a guitarist and she used to go and regularly watch him play live. Their next stage was performing together. “. She said, “He played rock and roll and roots music as well, so he introduced me to that whole other world.”

Marc’s response was something quite different from that of Erin’s. He referred to a babysitter who was into rock and roll and smoking as an accompaniment. He elaborated, “I’m giving him the truth. So I used to get stoned when I was eight years old. I was probably in a contact high for the first five years.” However, the record that really changed it for him was when she first played Zeppelin IV. He was then told that his eyes just got huge and he just stared at the record player. He wouldn’t move and so he summed up “She always played Zeppelin for me and that’s it…”

Jim appeared to have had more of an orthodox introduction as he recalled. His introduction was pretty typical until he heard a particular album. He explained “The seeds were sown with The Allman Brothers live at the Fillmore East, that’s when, that was a transforming experience for me and I still love that album to death. The guitar playing and the singing on that record is just incredible and that really began my journey into music.”

Now that the interview was coming to a close, I asked them who they would choose to interview if roles were reversed? Marc was the first to reply stating “My first thought about that would be Pablo Picasso. I’m super passionate about art and frustrated as well because I wish I could paint well. I try every once in a while, and then pick up the guitar and seem to be happy with that.” Erin mused before responding with “Oh man. Maybe one of the great violinists like Itzhak. You know? He had a really tough life and I feel like he expressed that in his music and I’d love to hear what he had to say about it” JD thought long and hard before responding “It’s a hard question. I mean there are lots of people I can think of. I’ve actually met a lot of people too. I think I’m going to go with…It’s funny, I might actually like to interview Laura Nyro. There are others who are huge influences etc. Her music is so from the soul. Right? That it would be interesting to talk to her.”

If you hope to catch them live just as I do, the band continues to play some headlining shows in the UK and hopes to do a comprehensive tour of the UK and Europe. In their words, “If we can put it together, we’d be more than happy to do it. We’d love to go out and play for an hour and a half, two hours and give everybody a good dose of Straight Shot music.” What a good bunch of Americans after our British hearts.

I'm a 40 + music fan. Fond mostly of Rock and Metal my staple-musical food delights. Originally from Northern Ireland I am now based in the UK-Manchester. I have a hectic musical existence with regular shows and interviews. Been writing freelance for five years now with several international websites. Passionate about what I do I have been fortunate already to interview many of my all time musical heroes. My music passion was first created by seeing Status Quo at the tender age of 15. While I still am passionate about my Rock and Metal I have found that with age my taste has diversified so that now I am actually dipping into different musical genres and styles for the first time.
RELATED ARTICLES
don henleyfeaturesjd & the straight shot