A CONVERSATION WITH PAUL WEBB OF RUSTIN MAN

Rustin Man, aka Paul Webb, has released his sophomore album Drift Code on Domino Records. A follow up to the dense and enigmatic Out Of Seasons, Rustin Man continues a legacy of dreamy and lush arrangements with infusions of English folk music, jazz-like instrumental touches to weave an otherworldly contemplative experience.

For several years after Talk Talk, Paul Webb lost interest in playing bass but this new album has reignited that interest. Drift Code features Webb performing bass, keyboards and guitars. “My bass style has always been quite mononic” Webb says of his playing “just kind of moving and managing back onto other instruments.” After years of tinkering away on these songs, piece by piece, Rustin Man is ready for another record. “I use the Rustin Man name because I like working behind something. I always think the music transcends itself and I don’t like using  my own name….it’s something to hide behind, a thing I can use to visualize the music better.”

Drift Code is stacked up with stories, says Webb, who describes the song “Judgement Train” as a dark fantasy about about a man playing cards with who he thinks is god but ends up being the devil. “When you are on a train, your destination is always cut out for you” says Webb. “You are on a one-way track and you will always end up at your destination.” 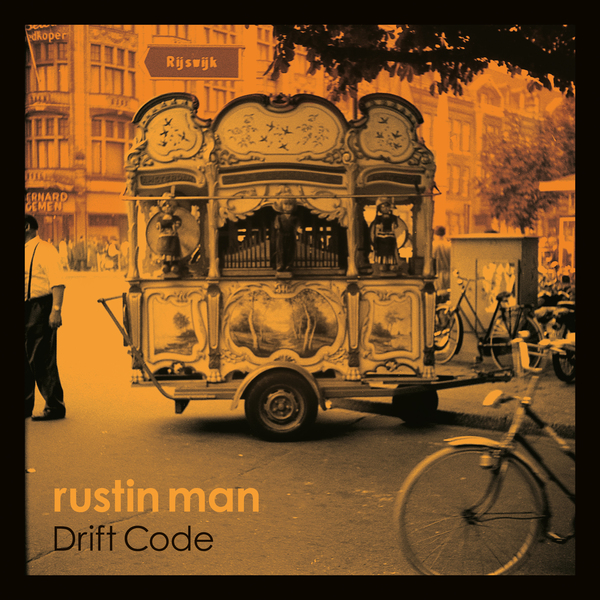 When asked about the inspiration of the album’s name, Webb describes his work as “something that drifts, it’s very free-spirit-y, it moves around but a code is very fixed.” The extended nature of Drift Code’s recording has given the album an eclectic feel as Webb admits. “I think that’s what makes the album sound like it does. You are time-traveling through songs.” Performing most instruments himself, Webb recorded all the songs for each instrument one at a time, returning six months later to add another track to each combustion. “I put all the bass down and then the guitars together after that. By the time I get around to the first song again, I haven’t heard that song for six months so I get a new kind of perspective each time I go back there.” Time is a major hallmark of Dirft Code. “I can’t imagine it sounding like it does if I hadn’t spent that amount of time on it,” says Webb.

The album was recorded over several years in a secluded Essex barn. Webb was delighted to have Talk Talk bandmate Lee Harris play drums on the new album; “we’ve been playing together since we were kids” says Webb of his longtime drummer friend. “We know each other very well, we’ve done albums together in our own recording studio and I was doing the main production here and he only lives down the road.” The decades of chemistry and collaboration are apparent on the carefully constructed musical arrangements. “His drumming always feels very individual in terms of the way he does it and looks at drums. It’s very mantra-like, he gets a pattern and really hones in and expresses himself within that pattern.” Playing with Harris has been one of Webb’s favourite aspects of the Rustin Man. The isolation from busy inner-city London helped Webb gain particular focus and inspiration. “When you are in a field in the middle of nowhere, that puts a value around you so you start feeling the music taking other-worldly shape.” Webb built a recording studio in his house and decorated it to reflect the atmosphere of the new album. “We’ve got statues and decorations around to make the place look sort of fantasy-like because it’s a living as well as a working space” remarks Webb.

Even after a successful career with Talk Talk and previous Rustin Man collaboration with Beth Gibbons of Portishead, Webb doesn’t know what to expect from Drift Code, suggesting only time will tell. “The thing with all records that you do, it’s always nice when you meet someone and they say ‘your record got me through university.’  When you make a record, it’s a time and when that album’s released, it’s about how it affects people.”

Webb hopes to take Drift Code out on the road as well as finish up another album’s worth of extra songs. “I’ve got quite a few tracks left to look at and maybe finish as well. I’d like to go out and play those live. We did that with Out Of Season so it would be nice to do it with this one as well.” Webb assures us that the next Rustin Man record won’t be so long in the making.

The Spill Magazine is a Toronto-based online publication dedicated to covering the independent music scene with a strong focus on our thriving hometown talent. Our writers bring you up-to-date news, in-depth features on musicians and reviews for the latest CD releases. We also travel to the front lines for all local festivals including Canadian Music Week and North by Northeast. Don’t forget to check out our Facebook and Twitter pages for all daily Spill updates.
RELATED ARTICLES
beth gibbonsdomino recordsdrift code