Features
2
1221
previous article
SPILL MUSIC PREMIERE: MONSTA MACK - "I GOT THE JUICE"
next article
SPILL FEATURE: READY FOR THE LONG ROAD AHEAD - A CONVERSATION WITH GREENHOUSE 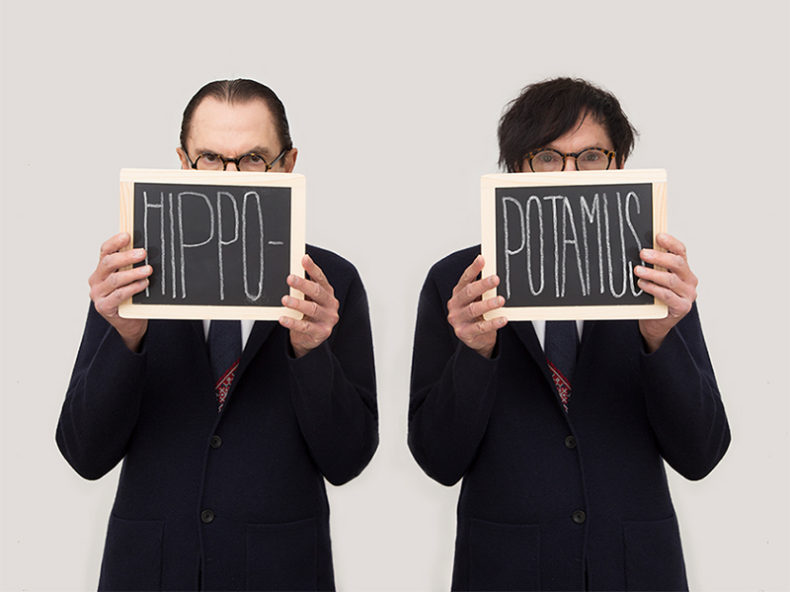 AN INTERVIEW WITH RUSSELL MAEL – VOCALIST WITH SPARKS

Sparks have been plying their eccentric style of music and brand since the seventies. The band has survived the changing tides and trends for many years just doing what they do best. They have forged their own creative path, irrespective of what is current or en vogue. Ahead of a new album release and UK tour I was able to have a brief discussion with vocalist Russell Mael.

On researching for the piece I was quite surprised that Sparks over the years appeared to have been so innovative throughout their career in so many ways. I therefore feel that to just call them a “band” would be lessening their impact; I put it to Russell whether he agreed with me that “Sparks” was a broader artistic entity than just a mere band. After careful thought he concurred that he saw them as “a little club that you have to know the password or the secret handshake to get in to”. He added that was what a lot of their fans actually relished about the band. It was something that the masses out there, even after this lengthy career, still may not even know the band, but the people that do still treat it like a well kept secret. They enjoy the fact that the band is this unique persona, and it works within its own little universe where only Sparks rules apply. It is a band obviously in one respect, but it is more multi-faceted. Russell gave me a little insight into a current project that they are working on. They are doing a movie/musical project which is  going to be  high profile work called “Annette” directed by a French director called Leos Carax. Russell also elaborated on the different personalities of Sparks- and how these stand apart from the music as well. He agreed that their fans would see Sparks as something more than “just a pop band. However he did add that there is nothing wrong with being just a pop band but “there is more of a stance to what we do, that is something that does not necessarily fit into typical pop music” 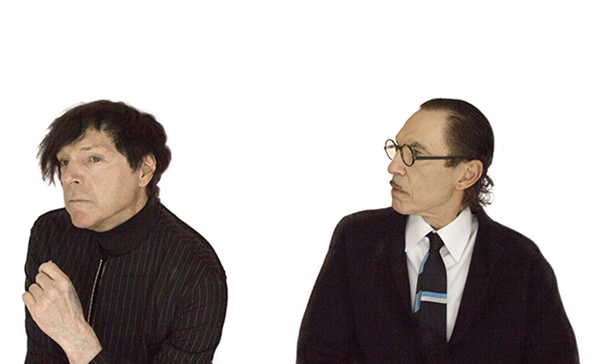 I asked Russell then if he could attempt to explain what Sparks still existed in 2017. Laughing, he attributed it to their passion for what they do. He felt that it would have been a lot easier to be lazy and not care about what you are doing, however that would also mean that Sparks would not still be around. Russell felt that the reason the band were still here and back with a new vibrant album that is both vital and forward thinking, is that they just genuinely care about what they are doing. They still have a passion and are able to do stuff that they feel is still modern. Sparks are also able to do things that are uncompromising within the confines of pop music. All of those factors unified as an explanation as to why the band are still in existence.

The reference to Sparks’ new album for which a new video for the title track has just been released allowed me to discuss the band’s unusual approach in the song writing process. I felt that they defied traditional conventions in their rather unique approach to creating their art. Ron apparently does most of the band’s lyrics and takes great personal pride in the process. He steps out of the conventional, and what is tried and true, and he is able to deal with subject matters that are not even traditional. He can even take those that are traditional and deal with them in a non traditional way. He takes a genuine pride in lyrics that are articulate and actually have some meat and substance to them. Ron respects writers like Noel Coward who have a craft to their writing. He tries then to apply a similar craft to writing lyrics, which Russell feels is largely missing from pop music. He feels that it is usually glossed over and people don’t really care. Generally people feel that lyrics should be unnoticed in a song which somehow makes them appealing in a generic way. Sparks however feel that lyrics should be really noticed in what they are doing because that’s an equal part of it. The music and the lyrics should combine both effectively and efficiently together. They have to make a statement in some way. I put it to Russell that to me their lyrical style reminded me of the freestyle rap battles, where an idea or lyric would be submitted and there would be a to and fro process resulting in the end being totally different and off base in terms of where it first started. Russell noted that he felt my idea was a really good observation in comparative terms to how Sparks created lyrics. They felt that there was more of a kind of kinship to that kind of approach to writing lyrics in a certain kind of way. Russell referenced the new single and title track of their forthcoming album Hippopotamus as an example. He felt that it wasn’t really a narrative as such but that it goes from point A to point B, and that things just come up along the way. He felt that my analogy in that way was an accurate one.

“When we don’t defy conventions and perceptions then we have failed.”

Following on the subject of the new album, I was keen to find out if Sparks had any defined plans for the live tour dates which would include some shows in the UK. Sparks’ live shows are famous for their production and visuals. Russell however surprised me by revealing that Sparks wanted to present a lot of the new album in those shows. They were of the belief that if a band had a new album that they were proud of, then they should be proud and want to present that to their fans. They have always played a healthy dose of the new album, feeling that it fitted comfortably, seamlessly, and musically with other eras of Sparks. He also explained that they had a great new band who he was enthused about. They had debuted at the Six Music Festival in Glasgow, and that had been a really great experience, and also very well received. The focus on the forthcoming live dates would not be for Sparks to have to search out some kind of extraneous things for live shows. The special element would come from the actual performance itself rather than something specifically designed for visual impact. There would obviously be some element of visual-lighting, etc., but the real strength is that it would be a really exciting live band.

Sparks, I feel, have a reputation of challenging perceptions and defying conventions. I wondered if this aspect was still enjoyed by the individual band members. Russell’s response was “Yes, always (laughing) when we don’t defy conventions and perceptions then we have failed.” He felt that was all part of the band’s mission statement. I also believe that Sparks has not fully been recognized as the innovators that they have proven to be throughout the years. Russell stated that there was different ways of measuring what success is and what recognition is. The mere fact that the band still exists in 2017 is recognition in itself for what they have done. He felt that any success and acceptance is not as a result of their past, but rather than what they are doing now. Did he feel that it was more important to have earned the respect of their musical peers over achieving commercial success? Many bands and artists had name checked the band over the years. I was keen to find out how Russell viewed this bestowed kudos. Commercial success Russell explained would be great to have for the same amount of effort as not having it. Sparks also feel good when bands reference them as a source of inspiration on their careers. They also personally find it humbling. 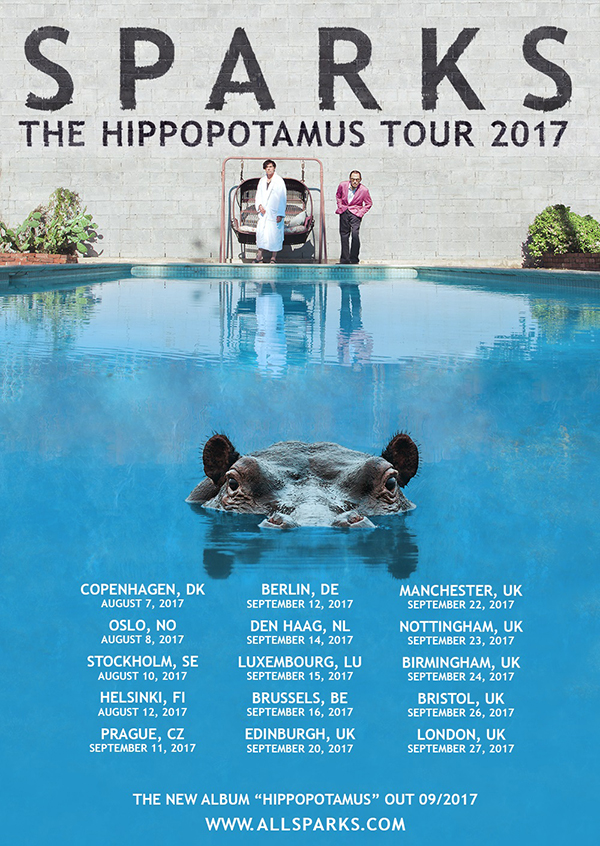 Sparks have worked with many other artists over the years and from a variety of musical genres. Would this forthcoming album see their creative partnership extended again to outside collaborators? Not on this occasion, Russell informed me however, and he did let it slip that in an album of essentially “pure Sparks”, there would be a song inspired by working with the French director Leos Carax, “When you are a French Director” He has a little spoken part on the track.

Sparks have a unique sound. I was particularly curious regarding Russell’s vocal style which is completely like no other singer that I have ever heard. It had not apparently arisen as the result of formal lessons but rather something that was discovered through the style of Ron’s songs, the way that the songs were written and the particular key. They had never considered transposing songs in a higher key down lower to make it easier. The nature of how the songs were created just had directly influenced the way he sang them. He regarded his particular vocal style being described as individual or unique “as a compliment”. He saw that as totally different in this day as he described “indie music” as mostly having generic vocals. He could not understand why more singers didn’t challenge this and step outside the norms with their singing.

Sparks have defied musical genres and styles and endured. Russell referred to a sense of great personal pride with regard to Sparks’ musical legacy and in what they have done. He referred to their famous 21 album run of dates in London where they performed a different album each night, for 21 nights straight. Most of the albums he stated were not of a particular era but may have elements of an era. He stated that it awoke the band to the fact that it still sounded fresh. Sparks “have a real pride in our whole body of work”. I pointed out that even with that particular thing that they were ahead and innovators. Bands now were touring and playing entire album shows when Sparks had done it way back several years ago. In terms of future career ambitions and goals, Russell merely stated that they just wished to get the movie music that they were currently working on, with an international cast of A List actors completed. That had always been a dream for Sparks which was now finally coming to fruition. In addition the fact that they were still able to create new Sparks music and tour with that was still a dream for them to do even after the long career that they have had to date.

I'm a 40 + music fan. Fond mostly of Rock and Metal my staple-musical food delights. Originally from Northern Ireland I am now based in the UK-Manchester. I have a hectic musical existence with regular shows and interviews. Been writing freelance for five years now with several international websites. Passionate about what I do I have been fortunate already to interview many of my all time musical heroes. My music passion was first created by seeing Status Quo at the tender age of 15. While I still am passionate about my Rock and Metal I have found that with age my taste has diversified so that now I am actually dipping into different musical genres and styles for the first time.
RELATED ARTICLES
bmgfeatureshippopotamus