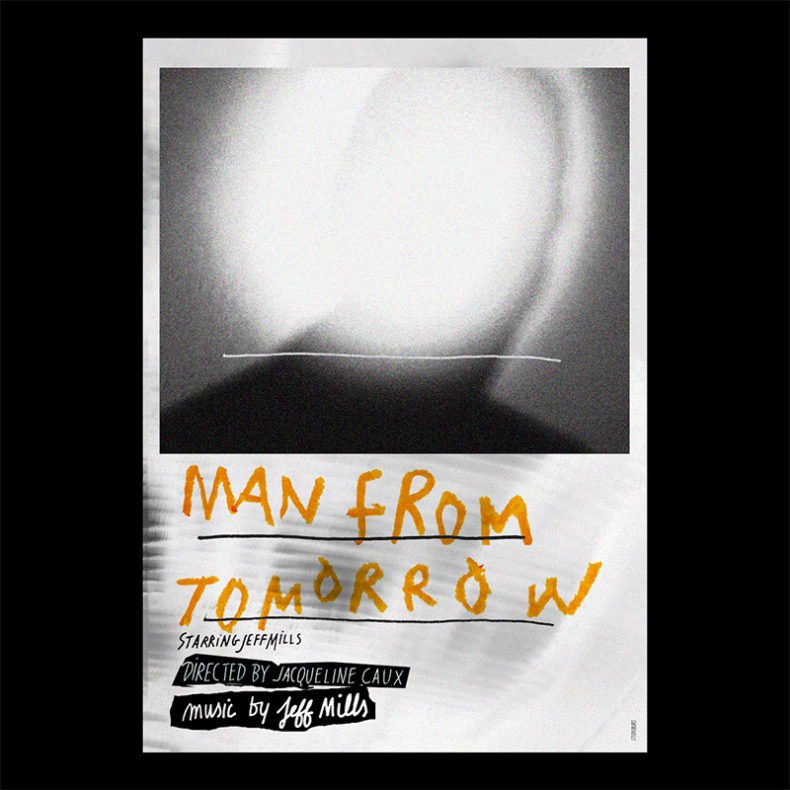 Man From Tomorrow is the third movie scored by Jeff Mills, the world-renowned Detroit-born DJ, producer, composer, and founding member of Detroit’s legendary techno collective Underground Resistance – but it is his first with French filmmaker Jacqueline Caux. After meeting through mutual acquaintances in Paris, the two artists embarked upon creating a moving meditation of what DJs and electronic music producers go through psychologically – as jet-setting performers forever on the move, rarely in one place long enough. The result: a mesmerizing and visually powerful non-narrative film scored by Mills’ minimalistic techno that features the man, himself.

Man From Tomorrow screened in Toronto on September 9, 2017 after its 2014 debut in Paris. It explores Mills’ musings about the future, space, humanity and his work as a creator. Caux explains how she wanted to convey the loneliness of life as a DJ and producer of electronic music through her “analogue” use of imagery.  “No digital after-effects were used in this film,” says Caux during a fascinating Q&A at Toronto’s Revue Theatre, hours before Mills’ late-night techno set “Into the Void” at a warehouse up the street. “Everything that you see on the screen was filmed as is.”

Much to Caux’ surprise, Mills created a number of tracks for the rushes allowing her to choose the music tracks she felt best matched the imagery. Mills felt her choices captured the themes of the film well. The two are clearly very much in sync creatively and intellectually, often finishing each other’s sentences throughout the Q&A.

“A lot of tracks were made without midi or synced. So three or four different time signatures were used,” Mills says. “I was curious to know if electronic music could be more cinematic. Could it change the atmosphere in the room? Change people’s perspective?”

The film opens with a blinding strobe light, in beat to Mills’ techno score. A growing shadow of Mills grows on the screen. Black and white imagery continues throughout the film as Caux places Mills in shadow, in a metallic blazer breaking away from a crowd, to a close-up of his hand being unbound by a black cord, and so on. These images convey isolation, freedom, release, and forging a new trail – themes also seen and heard in the emergence of techno as a musical genre in the 1980s, as well as the experience of many techno music aficionados’ attendance to all-night warehouse parties.  Mills, who is known for his dark, otherworldly techno sets, remarks: “I’m in the shadow a lot because that’s how I spend most of my life.” Caux is quick to add: “And the loneliness – you spend a lot of time alone. Many of us don’t think about that but you are alone [despite being in a club with thousands of people].” Perhaps this is a commentary on the philosophical sense of aloneness we experience throughout life.

Caux and Mills describe how the film intentionally reflects of the very existence of a DJ: cloaked in shadow, away from the people, free but also always watching and observing others.

“A DJ learns how to use their peripheral vision simultaneously,” says Mills. “I think DJs are conditioned to learn how we interpret… how we approach things. After thirty-something years of playing music to people and having to introduce this idea in seconds…the way things appear [to me] is connected to the way things sound. When you’re around people all the time, you learn how to look at yourself.” He laughs about the “wasted space” that often exists above many humans – referring to our busy minds of little effectiveness most of the time.

Mills stays close to the roots of his heavy, building, minimalistic Detroit techno throughout his score. Influences from futuristic drum machines, synthesizers and varied time signatures match his interest in intergalactic space travel.

“I’m nowhere near to being a scientist,” says Mills, “but I do look at [planets] a lot and think of conversations I’ve read by astronauts when I play. I can imagine approaching the planet, being in space. Some people might not understand it but, I think, as the genre [of techno] grows older and life becomes fuller and more interesting, the subject [of space] will be more understandable.”

“People have discussed space since the 1940s and 1950s [in mainstream culture]. But I think that we are in the space age right now,” Mills continues. “I’m convinced space is where humans will spend more of our time in and that we may use the planet for agriculture [due to the extreme natural state of the Earth’s surface with hurricanes, etc.]. We will have to rethink life and death. And if I can do something in music to address these subjects right now, I will.”

When asked how the music is linked to the use of space, cosmically and as seen through the architecture Caux utilizes throughout the film, Mills shares “In method I built [the music] up and then began to subtract and extract the things that are needed. I did that because I want the listener to make up in their minds about what they’re listening to. I didn’t want to make a full idea.  The combination of sounds and the sequence they play out is how I think of my contribution to music.”

Mills and Caux’ use of space is similar to free jazz – a genre that Caux believes techno naturally evolves from. “It depends how music is used and what you do with it. Carl Craig doesn’t do the same things. Juan Atkins doesn’t play the same way. It’s different the way you relate to your creativity and what you are doing with it,” she says. “When I ask Juan Atkins why did you do that? And he says ‘Just to be surprised musically and creatively.’ That’s very important. And that’s the reason I am so interested – the freedom of the aesthetic. That to me to is very important.”

Mills agrees with Caux. “That’s the freedom that [techno] allows,” he adds. “My path is clear. And the reasons that I want to make music are not obstructed and I also believe that other musicians and DJs are also free and most choose not to deal with the consequences [of having this freedom]. I think if you are really connected to what you are doing and disconnected to what peoples expectations are and about money,” Mills continues. “It is just between you and the machines and creativity. That’s really what it’s about. It’s not the money or fame part. These are just rewards and right time, right place.  But creating something from nothing – you don’t need an audience or a billion dollars to do this. You just need a few moments of your time. Starting from there your whole life can be fulfilled by creating… you’re just contributing to something much larger than techno.”

Purchase Man From Tomorrow Via

Talia Wooldridge is an avid music lover, composer and ethnomusicologist who contributes artist interviews, live concerts, festivals and album reviews for Spill Magazine. She has written extensively on the intersection of music, personal identity and cultural symbolism with an early focus on Latin American Hip Hop and female Cuban rappers. In her spare time, Talia writes, composes music and manages Music Can Heal, a non-profit that brings live, award-winning musicians to inspire healing in hospitals, hospices and communities in need. Her next project is an interactive music-travelogue exploring music cultures and music travel around the globe. Follow her here: www.taliawooldridge.com + www.movetoyourownbeat.com.
RELATED ARTICLES
featurestoronto