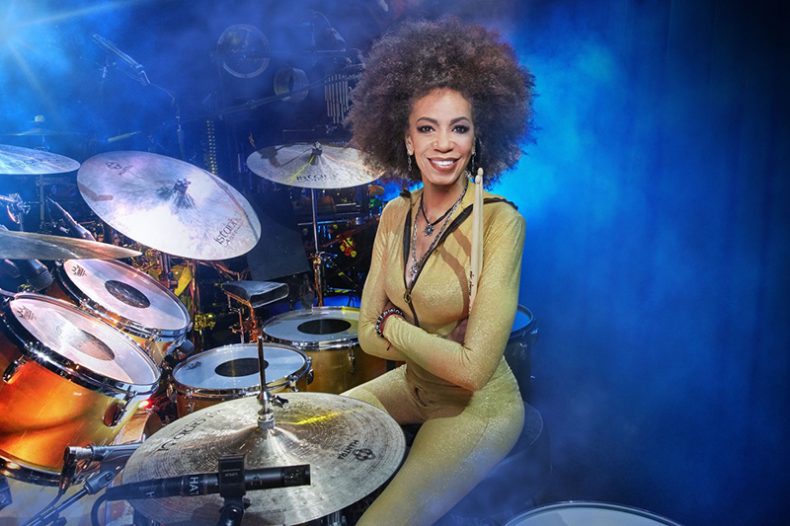 GIVE THE DRUMMER SOME

A CONVERSATION WITH CINDY BLACKMAN SANTANA

File Give The Drummer Some under the ‘albums you didn’t hear about but should most definitely check out’ category. The latest album from Cindy Blackman Santana – former, long time drummer for Lenny Kravitz and current Santana drummer – is a musical odyssey for the modern age that seamlessly brings jazz, pop, rock, and funk together while also featuring the likes of Kirk Hammett, John McLaughlin, and, naturally, Carlos Santana. Taking some time to walk me through the making of the album, the acclaimed drummer, singer, and songwriter shares all.

Give The Drummer Some is a fantastic example of true musicality from both the perspective of the songwriting and performance. Written and recorded over the span of the last three years, Blackman Santana reflects on the creative process. “Since we were all on tour, it took a while to get everyone into the studio to make the record… My goal was to just get in a studio, myself and a bassist – Matt Garrison – to come up with some vibes and then we added Carlos to that mix and the writing was very organic. The next session, I had Vernon Reid and Neal Evans come in and we did the same thing and then some tracks came out of writing sessions with Narada Michael Walden.” Having the rhythmic foundations recorded live, “just built on jams” as Blackman Santana puts it, with her vocals and some of the lead guitar tracks added later, the seventeen tracks are incredibly organic as they hop between pop – “Everybody’s Dancin’”, “Superbad” – rock –“You Don’t Wanna Break My Heart”, “Evolution Revolution” – and full on jazz instrumentals – “We Came To Play”, “Miles Away” – in a manner that digs deep into a seemingly infinite well of inspiration and refined musicality. Opening with John Lennon’s classic, “Imagine”, Blackman Santana explains her thoughts on such a bold cover choice, “I wanted to cover that track because of the message… I love the simplicity of it, the beauty of it, but I didn’t want to do it the way others do it, I wanted to do a rock/funk version… we took a nod from Lenny on that one, using the guitar from ‘American Woman’ as a template for that.” Furthermore, the cover got the nod of approval from Yoko Ono, Blackman Santana explains, “we were thrilled when we heard she loved the song. We also joined with her with SongAid and MusiCares – all the proceeds from the song will go to those organizations.” 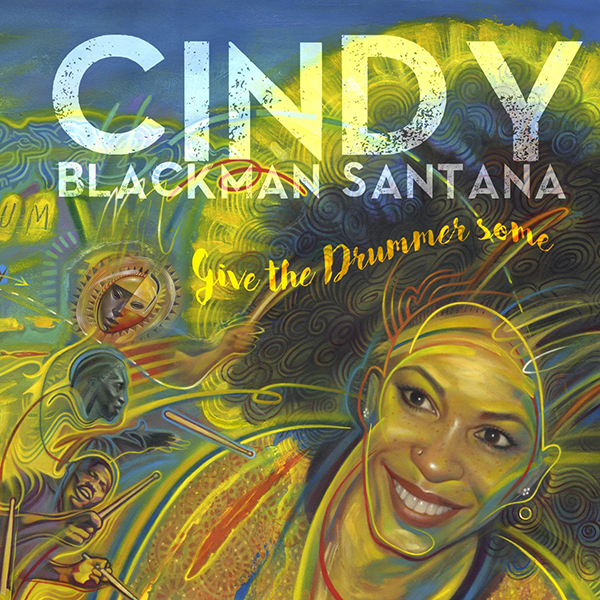 PURCHASE GIVE THE DRUMMER SOME

Featuring an incredible cast of musicians, Give The Drummer Some is overflowing with talent. When asked if any of the collaborations stood out to her, Blackman Santana couldn’t narrow it down and reminisced about everyone who recorded on the record and applauded their contributions to bring her record to life. Beyond humble, Blackman Santana mentions each artist by name. Expanding beyond this, she tells me, “of course, Carlos is always a standout… John McLaughlin is a standout, he’s such an innovator and one of my musical heroes. Neal Evans, on “Velocity” just sounds like Herbie Hancock to me and then Kirk Hammett is just so musical – you think Metallica and you think of this wall of sound, but Kirk just brings such a sense of musical sensibility.” With the musical master class that is Give The Drummer Some, there isn’t a single musician on this album who shouldn’t be; however, the absence of long-time band mate Lenny Kravitz is certainly felt, with Blackman Santana adding, “I would have loved to have gotten Lenny on this record. I’m hoping that he’ll be on the next one… He’s got all that funkiness, that great tone – I’d love to hear him, Craig Ross [long-time live guitarist for Kravitz] and Carlos on the same track, that would be amazing!”

Refusing to be held down by any stylistic boundaries, Give The Drummer Some is the musical embodiment of Blackman Santana’s career as a one of rock and pop’s most prolific drummers. The album is further enriched with the presence of an incredibly tight band and a handful of legendary guitarists, and Blackman Santana couldn’t be happier with it, exclaiming, “everyone put their heart into this album and you can really feel that in the music.” While there were hopes to be able to tour with Santana and the core rhythm section, that has naturally come to an unfortunate halt as the mind could only wonder as to the musical destinations this band, jamming, soloing, improvising, and grooving would go when they got on stage. Regardless, Give The Drummer Some is a must-hear musical experience with Blackman Santana and her band leading the charge on fusion music in 2020.

A passion for music has always been a part of Gerrod’s life. As a young boy, he was raised on a steady diet of the music from The Chili Peppers, Aerosmith, The Stones, Prince, and others from his mum. Raised in the GTA, Gerrod continued to foster his love for music by attending a wide range of concerts and learning the drums. His unapologetic passion for music has no bounds and has spread to a wide variety of styles, whether it be the 90’s rock that sound tracked his teenage years, the jazz he studied in university, or his newfound love for hip-hop. He recently received his bachelors in music and education from York University and is passionate about writing and reviewing good (and less than good) music. Gerrod is also the drummer and songwriter for a Toronto based rock & roll band, One In The Chamber.
RELATED ARTICLES
carlos santanafeaturessantana
10