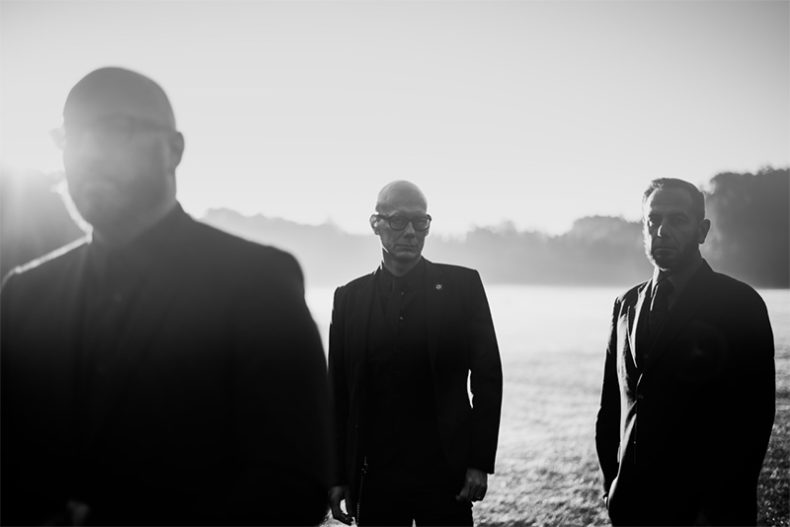 A CONVERSATION WITH JOAKIM MONTELIUS OF COVENANT

Since their first album in 1994, Dreams Of A Cryotank, Covenant have created their own sound in electronic music. They have also created remarkably deep, intelligent albums that force the listener to sit and listen rather than move around and dance. The band came from Helsingborg, Sweden but once they released their debut album, they developed a worldwide following. Eskil Simonsson and Joakim Montelius are the remaining members of the original lineup and they continue to produce thought provoking music.

In early March, Covenant released a new EP, Fieldworks: Exkursion, an EP to be embraced by fans and newcomers alike. Simonsson and Montelius are joined on the album by longtime band members Andreas Catjar, Daniel Jonasson and Daniel Myer.

“Our debut album [Dreams of a Cryotank] was pretty aggressive and rough, but already the second album [Sequencer] was quite different. And ever since then, we’ve presented a new Covenant with every new release,” says Montelius recently. “But the thread that holds them all together, at least to me, is that we’ve kept widening our horizons and we’ve become much more open to the world. We started as a trio with one songwriter, but now we’re a quintet with five songwriters, plus a lot of collaborators. And I’m really excited about the possibilities that open for our coming explorations. For the Fieldworks: Exkursion EP, all five members of the band wrote one song each, and we all chose field recordings that we’d made ourselves.”

Covenant is a band that continues to evolve and grow. The band in 2019 is not the same band as it was in 1994, and I am not referring to the members.

“Already from the beginning, we wanted Covenant to be a band that always evolved. It is meant to be a vehicle for exploration, so we strive to keep our minds open for new ideas and influences. To get new ideas is not the difficult part. The hardest part is to fit them into the band’s “identity.” It should always be recognizable as “Covenant music,” even if it sounds radically different and new. We need some sort of anchor; otherwise we’d just drift off into the mist and never find our way back again. Personally, I find that idea rather tempting, but as a band it would be a bit impractical.”

And growth has always been very important to this band. You can hear their evolution when listening to their earlier albums to present day Covenant. 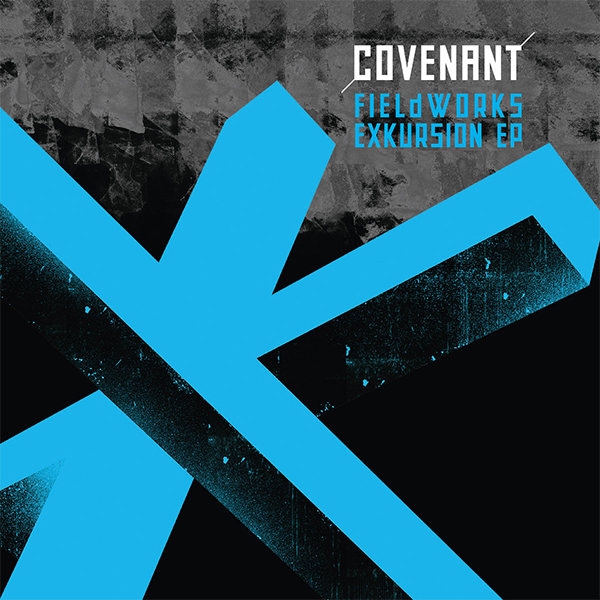 Says Montelius, “After our last album, The Blinding Dark in 2016, we discussed different ideas about how to keep our music evolving. We have always used “found sound” ever since our debut album, Dreams of a Cryotank. But we always used it as a spice for the electronic sound. So, we toyed with the idea of opening up our massive vault of field recordings that we’ve collected for many years, during our travels all over the planet, and to deliberately use the sounds of “the real world” as foundations for our new songs. It’s a way to open up to the world and a way to see/hear it in a different way. A kind of mindfulness, if you will.”

“We were absolutely certain that our debut would also be the only album we ever made. So we tried to cram every single idea we’d ever had into it, just to get it on record. We recorded it, released it and then we went back to reality, trying to grow up like normal people do. But it became so successful that we started touring and got a bigger record contract, and suddenly we’d made another album, which became even more successful; and so we toured a lot more in more places… and it just continued that way. No time to grow up and be normal.

Also featured on this EP is a guest appearance by industrial artist Grabyourface.

“We had Grabyourface’s tape Philophobia in the studio and we really liked it, so Eskil just had the whim to ask if she’d be interested in a collaboration,” says Montelius.  “It turned out that [Grabyourface artist] Marie [Lando] is a huge fan of Covenant, though we had no idea about that, and she was all game. We sent her a few tracks that Daniel Myer and Eskil had written during a session in Glasgow last year, and “False Gods” turned out really, really well.”

In 2019, it is very art to separate art from social and political issues. Covenant has never been a band with slogans, waving a banner, but over the years they have developed a very strong and loyal following that does look to them, not so much for answers but to help pose questions.

“We’re not exactly after making an impact, at least not with any sort of agenda. But naturally we want to touch people, to convey a bit of the wonder and the magic that we experience while making the music, hopefully sowing a seed or two in other people’s imaginations and feelings.”

“Our last album, The Blinding Dark, was all about that: we made it in order to cope with all the darkness and fear and confusion all around us in a very introvert way. We tried to shut our eyes to the world in order to make our inner eyes lead us.”

“The Fieldworks project is an attempt at a completely different strategy. We take the turmoil in; all of it: big noise, small noise, silence. Absorb it and transform it and send it back out again. Instead of closing our eyes, we try to be as awake and alert as possible and pick up as much as we can and hold it back up to the world like a mirror. We’re still working on what will probably be an album and/or possibly a few more EPs under the Fieldworks umbrella.”

And by “fieldworks”, Covenant is referring to found sounds and available sounds to augment its music.

“I don’t know exactly how the others went about writing their songs, but for mine (“Pantheon”) I used an idea that I had immediately after recording the speaker voice (inside the Pantheon in Rome) in the beginning and the end of the song. I combined that with a beat I made from a contact microphone recording of my four-year-old daughter tapping on my desk. There is also a recording from a Christian worship radio channel, but I got inspired by composer Alvin Lucier’s seminal [sound-art piece] “I Am Sitting in a Room” and removed the voice so the preacher can’t be heard. That left only the space he was in as he talked, which was then fed into one of my modular synthesizers and used to excite a bank of resonators.”

“So, it’s a pretty complicated way of working, but we find it very rewarding, and I think it takes our music in new and unexpected directions.”

In the end, what we as an audience has a new EP, full of sounds, music, melody and lyrics that touch on many subjects and encourage the listener to question and be open to other views.

“I hope people get the concept and listen to it with open minds. It’s not exactly easy listening, but I trust our audience to give it the time it needs. It takes a bit of work to enjoy and that’s on purpose. Some resistance is necessary to gain rewards of any substance. But even if no one likes it, we’re still proud of it because we managed to surprise ourselves. And that’s our raison d’être”

For more information and on the new EP, Fieldworks: Exkursion is available here, please go to Covenant’s Bandcamp page HERE.

All That Is Solid Melts Into Air

Joakim gives a quick insight into the text for All That Is Solid Melts Into Air (from Fieldworks Exkursion EP) + some clips from the show at der ANKER in Leipzig. There are a few copies of the new EP left, that you can get here: http://bit.ly/OrderFieldworksExkursionEPEuropeVideo by Ines Weidemann. Thanks to Claudia and Moni for your support!#Dependent Records, #Percy Shelley, #Fieldworks, #Allthatissolidmeltsintoair, #Covenant (OFFICIAL)

Before his concert with Dupont at Blasphemous Beats / kukuun last Saturday in Hamburg, Daniel Jonasson of Covenant (OFFICIAL) explained the story behind his fieldrecording for Popol Vuh from Fieldworks Exkursion EP. The clip to the song features some images from the beautiful “summer” night at Hamburg Reeperbahn.Today, the strictly limited EP (500 copies) will be released in the US via Metropolis Records: http://bit.ly/OrderFieldwoksExkursionEPUSA In Europe, some remaining CDs are available via Dependent Records online shop: http://bit.ly/OrderFieldworksExkursionEPEuropeVideo by Ines Weidemann / IAM-Europe. Thanks#dependentrecords, #Fieldworks, #FieldworksExkursionEp,#Dupont, #Kukuun, #BlasphemousBeats, #Covenant, #Reeperbahn, #KlubhausStPauli, #MetropolisRecords, #DanielJonasson

Short clip from Leipzig with Grabyourface and Covenant talking about and performing False Gods from the new Exkursion EPThis is the first chapter, stay tuned as Fieldworks evolves with single and album coming next. Thank you.Remaining CDs of the limited edition of 2000 now available from Dependent Recordshttp://bit.ly/OrderFieldworksExkursionEPEuropeFor US fans Metropolis Records§ will do a small run of 500 copies to be released March 30thThe EP will be available on all digital platforms in AprilVideo by Ines Weidemann thanks

Born and raised in Whitby, Aaron discovered music through his love of The Beatles. This led to a career in radio, writing for various publications, and ultimately a radio show about The Beatles (Beatles Universe), which ran for over four years. When not immersed in music, Aaron enjoys spending time with the loves of his life -- his wife Andrea, and daughters Emily and Linda (all of whom have an intense love of music too).
RELATED ARTICLES
covenantdependent recordsfeatures

by Kathy Nichols on November 9, 2016
THE BLINDING DARK AN INTERVIEW WITH JOAKIM MONTELIUS OF COVENANT Covenant’s ninth album, The Blinding Dark, which came out on November 4, follows the band’s original [...]