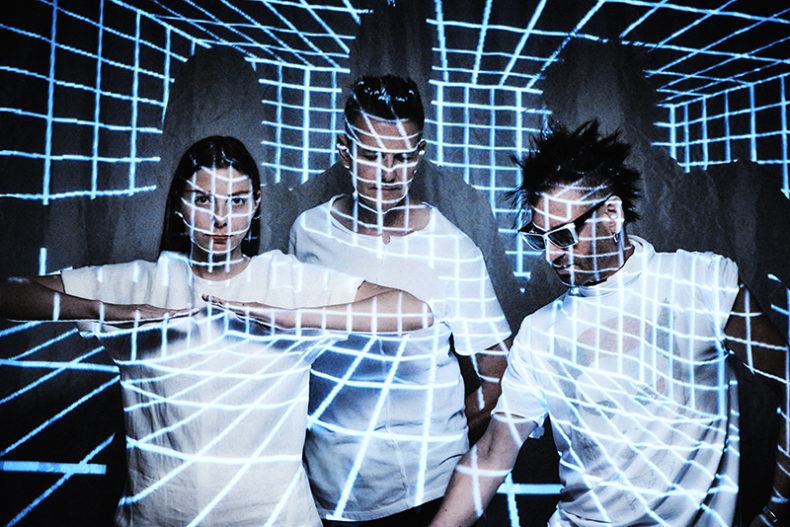 AN INTERVIEW WITH DANIEL ASH & KEVIN HASKINS OF POPTONE

“Well, this is a first, isn’t it Kevin?” Daniel Ash asks his fellow Poptone member. “The first time we have been interviewed while driving cars in L.A., this is a first!”

Kevin agrees. Kevin is Kevin Haskins. Daniel Ash and Kevin Haskins are rock/punk/new wave royalty. Both were members of Bauhaus, Tones on Tail, Love and Rockets, and now Poptone. To be involved with a first for these musical pioneers is a true honour. The fact that they were conducting an interview while driving around L.A. indicated just how busy they are with their new band.

“Oh yeah, we are crazy right now, really busy. We are doing all the prep for the tour ourselves, getting everything ready, so yeah, we are both busy, you’re picking t-shirts, right Kevin?” Haskins agrees with Ash.

“About nine weeks ago I had a kind of a revelation,” Ash remembers. “At four a.m., I figured out that it was obvious, I need to go out and play live. I had to get a band together and the obvious choice was to call Kevin, as we have been all the bands together and we get on well. We needed a bass player, and as luck would have it, Haskins’ daughter (Diva Dompe) plays bass, and she is really good, so she was in, and we started booking gigs.” Diva Dompe is an accomplished musician in her own right. She played bass and sang with Blackblack, a band well worth seeking out.

I asked Haskins if it is difficult being in the same band as his daughter. “I am surprised how well we get on together, well I shouldn’t be surprised at all. I enjoy her company, as she plays brilliant bass. She plays the bass line properly and it is like we have played together for years”

Bauhaus formed in 1978 and split in 1983. When the band split, Ash and Haskins formed Tones on Tail with bass player Glenn Campling. They recorded one album, three EPs and a handful of singles and they played one short tour.

“A lot of the songs we are playing live, about seventy percent are from our Tones on Tails days, and the Pop album. That album has aged really well, and it sounds like it could have come out last week. It is an album that fans want to hear live, and we have not performed any of these songs live since 1983. So we have had to learn them again.” Ash enthuses about Tones on Tail. “To be honest, of all the bands we have been in, Tones On Tail is my favourite band”

Haskins agrees, “I love Tones On Tail, I guess they were my favourite too, but in all honesty it is difficult for me to have a favourite of the three bands.” 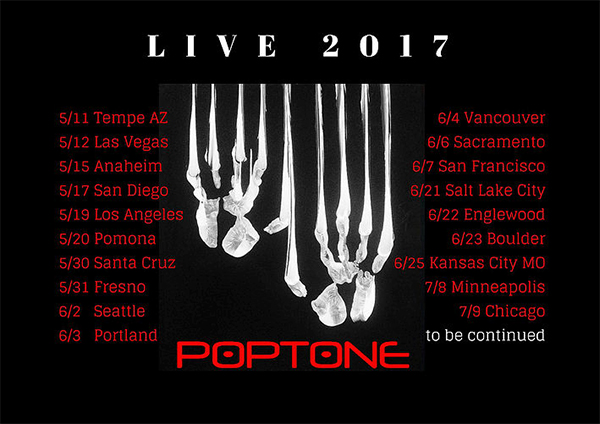 Tones on Tail disbanded in 1984. Then came Love and Rockets, featuring Bauhaus bassist David J. Of the three bands, Love and Rockets were, by far, the most commercially successful. After Love and Rockets called it a day in 1999, the members went solo, each continuing in music and producing extremely brilliant records. Both Bauhaus and Love and Rockets would reunite for tours, and in Bauhaus’ case, a reunion album, Go Away White, in 2008.

But for Ash, it was Tones on Tail. “The music still sounds fresh, and there was something magical about that band and that album, and people want to hear it. The songs are great, I was a bit worried about “Twist” because the guitar has a certain style, but it is all sorted. See Tones on Tail borrowed from several genres and the lyrics are way out there. It’s funny, look at the name of our new band Poptone, not planned but there it is.”

Ash continues — “Do you know where we got the name, actually? It comes from a Public Image Limited song called “Poptones” (from their Metal Box/Second Edition album). Great song, very heavy, and Poptone is very heavy. Originally it was “Slice of Life” (after the Bauhaus song), but that name was taken, so Poptone it is.”

Although they have produced so many incredible albums, for both, it is all about playing live.

Ash talks about live versus studio. “I love recording, but you do all the tricks in the studio to make up for the live sound, get the sound as great as you can. But playing live is a different experience, nothing takes the place of playing live.”

I have to ask the question. “Will The Bubblemen be making an appearance?” I asked. They issued one single in 1988, with an incredible video. Both of them laugh. “You never know, “ says Kevin. “I think those outfits are around, we just have to get them out.” Ash agrees with a great deal of laughter “you just never know, two of the three might pop up in some shows.”

Given their history, and their impact on music, this will be one show not to be missed. Daniel Ash is not wrong. In preparing for this article I got all my Bauhaus, Love and Rockets, and Tones on Tail records out, and he is right, Tones on Tail sound as fresh today as they did when I bought the album in 1983. Their other stuff is brilliant as well, but having seen Bauhaus, and Love and Rockets, I look forward to hearing “Christian Says” live. I know they are doing it, as they have kindly posted their set list on their website. The complete list of dates has not been confirmed, but I for one, am praying for a show in Toronto.

Born and raised in Whitby, Aaron discovered music through his love of The Beatles. This led to a career in radio, writing for various publications, and ultimately a radio show about The Beatles (Beatles Universe), which ran for over four years. When not immersed in music, Aaron enjoys spending time with the loves of his life -- his wife Andrea, and daughters Emily and Linda (all of whom have an intense love of music too).
RELATED ARTICLES
bauhausdaniel ashdiva