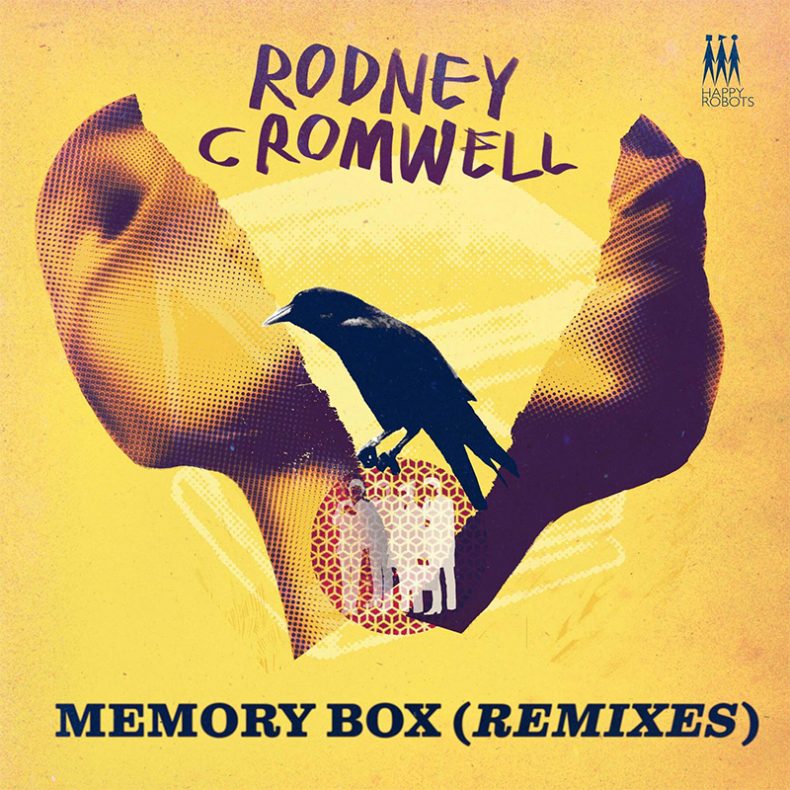 Ahead of Wednesday’s release of the Memory Box maxi-single from London-based synthpop artist Rodney Cromwell, we present the exclusive premiere for curious minds and retro synth / gear fetish-fiends. Fans of such artists as Broadcast, Pram, Stereolab, Death & Vanilla and Kraftwerk should especially enjoy Cromwell’s current, as well as past, output. So perhaps might you.

There are four tracks on offer, two of which are remixes of his new “Memory Box” single. Released via Happy Robots Records with distribution by Cargo Records , this release also includes the original version of the song, plus an ambient track ”Memory Stops”.

Rodney Cromwell is the nom de plume of Adam Cresswell, founding member of 1990s-2000s indie-folktronica band Saloon (who had four entries in John Peel’s Festive 50, recorded three Peel Sessions and had top 10 album of the year in The Sunday Times) and one half of electronic two-piece Arthur & Martha (praised by the likes of NME, The Guardian and Artrocker).

If you’ve just started listening to music in the past three years, Cromwell is not a name you would know as it’s been a full 2 1/2 years since releasing his latest Rodney’s English Disco EP. If you are only into ultra-modern music, you might also have skipped over his tunes, which are fully composed with retro musical instruments and studio gear. You might wonder how hard that may be for someone nowadays to create such music from scratch, seemingly easier for someone who was around at the time analogue instruments were “the norm”. Well Adam Cresswell (not yet performing under the Rodney Cromwell moniker) was around making music back then (at least in the early 90s, perhaps first learning the ropes in the 80s).

Well fast forward to 2021 – welcome aboard for this premiere. “Memory Box” is a song about perceptions of reality and the certainty of our memories. Certainly that is a universal theme that can apply to anyone at any age and from any culture. This music is based on our common human experience, with all its joys, quirks and misgivings. It’s a brilliant track – thank you Rodney Cromwell. We’ll take a dish of your cool-flowing retro synth delight with pleasure.

The first remix is a reimagining by Düsseldorf / Shanghai krautrock band MOOD TAEG, whose discordant re-interpretation is reminiscent of the avant-pop of Stereolab or the European coldwave of Ladytron. The second mix, by Retrosynth Records artist AUW, is slice of dark synthwave, pitched somewhere between Kavinsky and Pye Corner Audio.

With minimal percussion, Rodney Cromwell’s lyrics float over a bed of vintage synthesizers and effected guitar. Shunning a clean ’80s synth sound, the song is almost psychedelic in outlook, reminiscent of the minimal synth of acts such as Broadcast, Pram or Silver Apples.  The video, an atmospheric montage of heavily effected and distorted shots of rural Britain, was inspired by film auteurs such as Stan Brakhage and Chris Marker.

“Memory Box” is the title track of the forthcoming album. The LP is a mixture of electronic hauntological excursions, dreampop and European coldwave, scheduled for release in early 2022.  Using analogue synths and drum machines the LP conjures up an organic, dream-like world, inspired as much by Alice in Wonderland, Franz Kafka and Anna Kavan as by its sonic influences such as Kraftwerk and The Cure. The sonic pallet of “Memory Box” is both reassuringly familiar and completely distinctive.

Rodney Cromwell’s debut LP “Age of Anxiety: (2015) have garnered Rodney Cromwell features in Electronic Sound Magazine, NME, Huffington Post, Paste, Record Collector, BBC6 Music and national RNE3 in Spain, for whom he also recorded a live session. The debut album featured in scores of Best of Lists including Electronic Sound Magazine and he was named ‘Most Promising New Act’ by The Electricity Club. He has appeared on compilations alongside Cavern of Anti-Matter, John Foxx, Devo, OMD, Katy Perry and has supported artists such as Pram, Marsheaux, Death & Vanilla, Rowetta and Steve Davis, in addition to performing as part of Damo Suzuki’s backing band.

As of November 17, the “Memory Box” maxi-single will be released on limited CD and also available digitally, including on Spotify, Apple Music and directly from the artist via Bandcamp.

Also enjoy the video for the original version, created by Adam Cresswell himself: