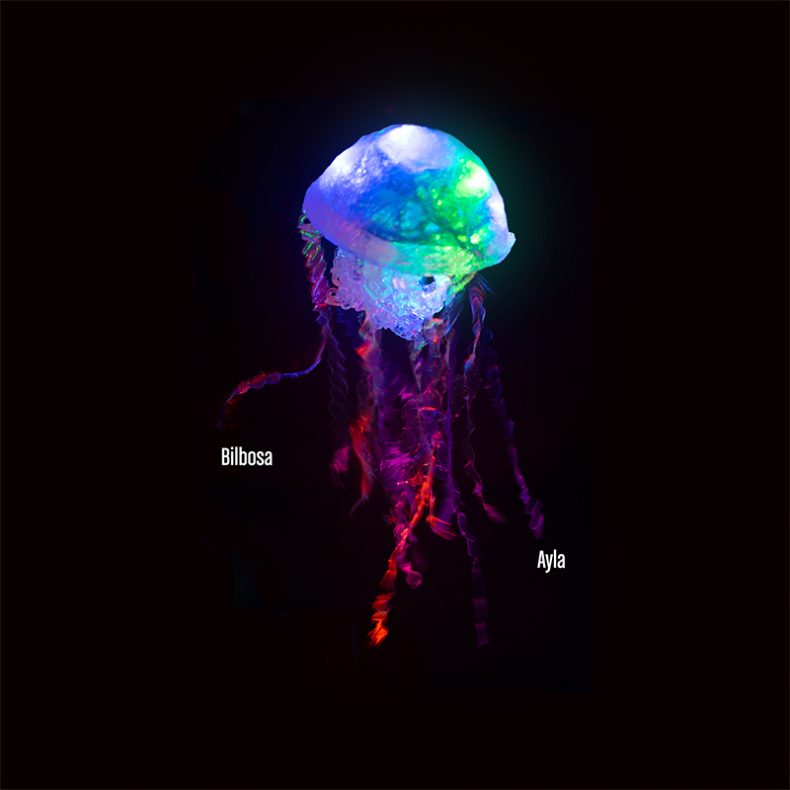 More and more in the age of Covid, musical collaborations have been taking place across vast distances, bringing artists together creatively despite geographic challenges. Take Italy’s Bilbosa as a case in point. Their new Ayla EP, while mainly instrumental indie pop with math-rock leanings, also features an appearance by Irish singer-songwriter Lori Sky.

“Covid forced us to become more creative in how we collaborate with others. As a band, we wrote the music and then sent it to Lori Sky, an Irish singer-songwriter. Lori listened to the track and wrote lyrics to the song, which are very personal to her and yet, there are very universal themes here about love, loss and grief,” says frontman David Carroll.

Now based in Scotland, Lori Sky (formerly performing as Lorraine McCauley) previously collaborated with David Carroll through a different project while fulfilling an artist residency in Genoa (northern Italy), where Bilbosa are based. After pursuing her master’s degree, 2014 was the fateful year that her stint with La Banda di Piazza Caricamento provided the opportunity for collaboration with Carroll, sowing the seeds for “Neon”, the lead track from the current EP.

Bilbosa are David Carroll (guitar), Stefano Pulcini (guitar and synth), Daniele Ferrari (bass and synth) and Gabriele Gennaro (drums). Formed in 2016 after the disbanding of the group Chaos Del Signor Gaza, the remaining four musicians spent much energy collaborating, jamming and trying to understand what musical route to take. The band locked themselves in a recording studio in 2018, resulting in the recording of their first official album, Diamond Dust, which they released in December 2020.

The band’s new four-track offering is being released via Italy’s powerhouse indie label Seahorse Recordings. Delightfully rhythmic and mesmerizing, each track is catchy and invites you into their world of groovy animated wonderment. ‘Tsuru’ and ‘3+4’ are pleasantly driven and leave you wondering what comes next, with the latter song featuring numerous time-signature change-ups throughout, bringing in the jazz and overlapping solo elements, which all fit together in perfect symmetry. The fourth track is the original version of ‘Neon’ before it was retrofitted to suit Lori Sky’s voice in what can only be described as a sonic masterpiece, recalling the best work from The Cranberries, Florence and The Machine, and Amy Macdonald.

Lori Sky hails from Donegal. Offering a powerful new voice and perspective on the arts scene, she makes music for the soul and senses. Performing at festivals since the wee age of four, she formed her first band while living in Japan. After her 2010 debut solo EP Haunt Me, she formed Lorraine McCauley & The Borderlands, debuted with the Light in the Darkest Corners LP in 2012, leading local press to tip them as the next Scottish contemporary folk breakthrough.

They say that music can be a true healing force. In this case, writing this composition really helped Lori Sky to work through the grief felt upon the passing of her mother.

“I saw the ‘Neon’ music as a bright light, like the love that a close relationship brings into your life. So I ended up writing this song to celebrate my Mum, who I had just lost. The music helped me to express what I was learning about grief, that when you allow yourself to feel the pain of loss you are more able to appreciate and understand the love,” says Lori Sky.

The accompanying video, produced by Plurale Video and written and directed by Stefano Pulcini, was co-directed by Simone Putzu and stars Karin Maltempo and Andrea Bagossi. it explores the strange times we are living in, the desire to be with the ones we love but the need to isolate has left us living in our imaginations. Trying to make those connections with the people we love in our mind or in our hearts instead of in person. Be it though losing them or though distance we are all longing for those close relationships and appreciating them more than ever before. The video is our interpretation of that precise moment in which you realize the importance of those emotions that you used to feel with those people who are now gone.

Also enjoy the video for the lead track “Neon”