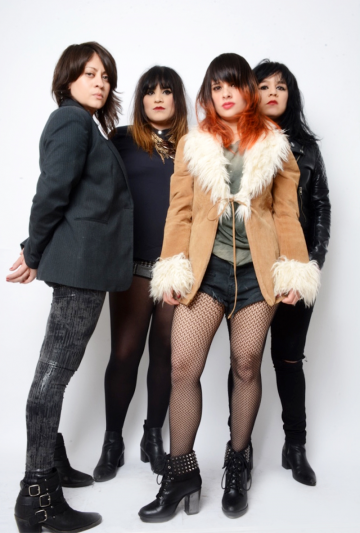 “Society in general has a tendency to paint a picture for us of what a successful  woman should look like and or be like. This painted picture can sometimes make a woman feel lost and alone as if she doesn’t belong or fit in. “Searching” is a woman’s journey in soul searching. It’s when she finally realizes that she’s found her voice and her passion and is ready to share it with her friends and the world. It’s when she screams from the top of her lungs  ” I want to be somebody;  hear me everybody…” ~Irene Quiles

About Stars At Night

Since their formation in 2010, East LA’s own quartet of fierce female Angelina’s Stars At Night who make a dirty, energetic, and powerful rock, spiced with punk, psychedelia, and plenty of attitude, have become a tour de force of sound and style in LA’s underground scene. With influences that range from Black Sabbath to  Yeah Yeah Yeahs, this bands sound is an amalgamation of raw force and elegant artistry.

Lead singer and keyboardist Irene Quiles is anything but reserved when performing. Her powerful voice and disarming lyrics can deliver you to a state of euphoria or push you into frenzied excitement. No less is the seemingly inexhaustible energy of drummer Joana Rubio. Creating the ground shaking heartbeat of each song, Joana pumps each song to life with shear power, talent, and presence. Bass player Elizabeth Banuelos never fails to keep the ground shaking with the raw deep riffs of her bass. Rounding out these four bright stars is guitarist Seleste Diaz. Behind the subdued stage presence is the sharpness and vision of a brilliant musician who seems to weave together hair-raising, hip-gyrating riffs and melodies as if from the ether. It is the authentic [visual and auditory] beauty of Stars At Night that will propel them to stellar heights.

Stars At Night’s trajectory has caught the attention of both underground and popular music groups, all who have invited Stars At Night to perform as part of their shows’ opening line-up. SANs (Stars At Night) live performances captivate audiences and make believers out of skeptics. They are made up of four elements of awesome, jagged-edged rock.

2010 saw the emergence of SANs self-released debut album, The Beginning. Since then, these cosmic creatures have gone through many changes. While still performing at venues throughout Los Angeles, their sound-scape is an ever evolving machine of lush sonic experimentation. In 2016, Stars At Night will release their much anticipated sophomore album, Stars At Night. The title proudly announces to the world: We Have Arrived. Their upcoming new single Searching, set to pound the eardrums later this year, conveys the celestial thundering music that has come to embody their universe. To those who have not yet experienced Stars At Night, I say this: WATCH OUT. These glowing spheres of energy are lighting up the night sky.