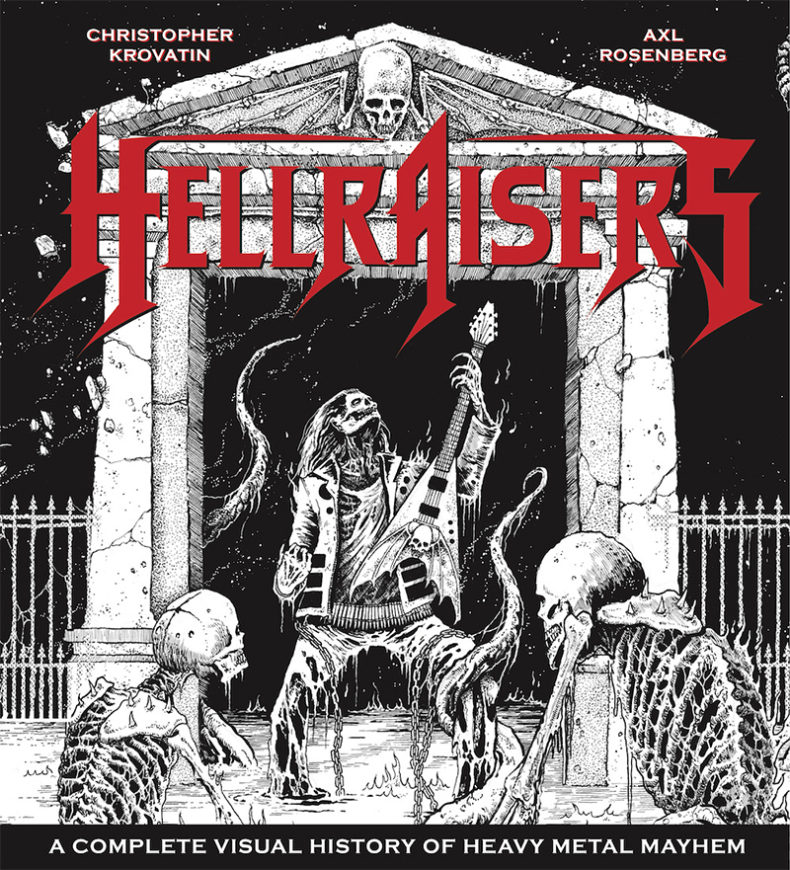 Coffee table books have become an essential element to music literature.  Over the years, a number of artists and concert photographers have come together to tell a narrative through the combined mediums of text and image which ultimately give the reader an enhanced experience, rather than if they only had one. Hellraisers: A Complete Visual History Of Heavy Metal Mayhem is no different at it’s core, but where authors Axl Rosenberg and Chris Krovatin succeed is how they conquer the history of metal in a way that is both visually appealing, and historically thorough.

Visually, Hellraisers serves as an excellent collection of images that vary from live photos, promo pics, and album art. The photos range in a variety of sizes and layouts to give each page a fresh sense as the corresponding text fills the space between images. It is this that makes Hellraisers so entertaining for a casual flip through its near three hundred page length.  For the more serious reader, the visuals make for an enriched reading experience with an array of visuals that will stir up nostalgia among long-time fans of the genre, as well as curiosity among newer fans.

From the early dedication to the “sheet metal machine that ripped off two of Toni Iommi’s fingers”, it is clear that Hellraisers expresses their heavy metal history with a great sense of humor. Underneath the images and wit, Hellraisers serves as a comprehensive look at the roots of metal and its numerous offshoots and scenes while also detailing the key figures who pioneered and innovated each respective sub-genre. The book is broken into three main themes: The Metal Ages, Crash Courses, and Cultural Studies. These three are not broken into clear chapters, but rather intertwine with each other throughout the length of the book. Hellraisers is mainly comprised of The Metal Ages which ranges from Proto-Metal – discussing the earliest and often disregarded influences on the genre including The Rolling Stones, Jimi Hendrix, and Led Zeppelin – to Deathcore and Djent – which looks at artists of the likes of Animals As Leaders and Periphery- and everything in between. The crash course and cultural studies come between the different ages with the former looking at smaller offshoots — or as Hellraisers calls it, “bastard children ” —  including industrial, alternative, and prog metal, among others, while the latter focuses on debunking urban legends about the genre such as questioning the endless bassist and drummer jokes. One of my favourite portions of Hellraisers was the inclusion at the end of each metal age of a recommended playlist of twenty-one tracks that best represent the style discussed, giving the book an audio component should you choose to stream their recommendations — and I can’t see why you wouldn’t!

In literature, finding a good book that properly looks at metal can be difficult. While some of the genre’s biggest heroes have written excellent autobiographies — Lemmy Kilmister’s White Line Feaver and Ozzy Osborne’s I Am Ozzy to name a few — and a slew of band biographies have also been published, it can prove to be quite the task to find a book that looks at the evolution of metal in such an informative fashion. Hellraisers: A Complete Visual History Of Heavy Metal Mayhem goes above and beyond when telling the story of metal with a visually exciting coffee table book that does the style justice through an entertaining and informative narrative, making it a must have book for metal heads of all ages.

Axl Rosenberg is the co-founder and co-editor of the heavy metal themed media outlet, Metal Sucks. He is also known as “the Piers Morgan of metal bloggers”. In April 2009, MetalSucks was awarded Metal Hammer’s Web of Death Award for “Best Reviews” for its “honest, insightful, unpretentious, and fun reviews”.

Chris Krovatin is the author of Heavy Metal And You, Venomous, and Mountain Of Bones and regularly writes for Revolver Magazine.

A passion for music has always been a part of Gerrod’s life. As a young boy, he was raised on a steady diet of the music from The Chili Peppers, Aerosmith, The Stones, Prince, and others from his mum. Raised in the GTA, Gerrod continued to foster his love for music by attending a wide range of concerts and learning the drums. His unapologetic passion for music has no bounds and has spread to a wide variety of styles, whether it be the 90’s rock that sound tracked his teenage years, the jazz he studied in university, or his newfound love for hip-hop. He recently received his bachelors in music and education from York University and is passionate about writing and reviewing good (and less than good) music. Gerrod is also the drummer and songwriter for a Toronto based rock & roll band, One In The Chamber.
RELATED ARTICLES
books
8.0