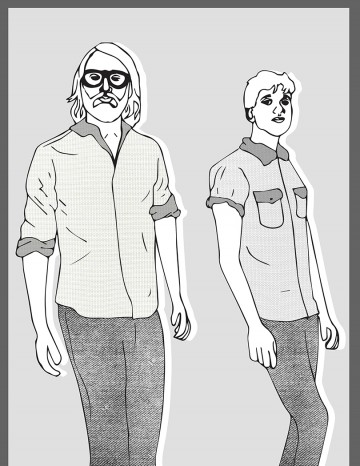 A collaboration between National vocalist/lyricist Matt Berninger and multi-instrumentalist/producer Brent Knopf of Menomena and Ramona Falls, El VY (“pronounced like a plural of Elvis; rhymes with ‘hell pie'”) came to fruition in 2015.

Friends and occasional tour mates for over a decade, Berninger and Knopf had been sending music to each other for years, but it wouldn’t be until early 2015 that those audio snapshots would come to life. The resulting 4AD-issued Return to the Moon, the duo’s debut studio long player, pairs Berninger’s distinct, sardonic wit and skewed narrative talents with Knopf’s imaginative production and versatile arrangements.

The first single from the LP, “Return to the Moon (Political Song for Didi Bloome to Sing, With Crescendo)”, dropped in late September, with the full-length following later that October.

Daniel is an illustrator/graphic designer based out of Austin Texas. He graduated from Pratt Institute with a Bachelors degree in Illustration and an Associates degree in Graphic Design. Daniel started his career in graphic design in the world of online casinos. Since then he’s worked with various clients from around the United States and Canada including but not limited to NHL, Subway, Paraco Propane, Pitney Bowes, Xerox, Conduent, Nestle Waters, The Spill Magazine, Stamford CT’s DSSD, Beechnut Baby Foods, Elizabeth Arden and much more.
RELATED ARTICLES
brent knopfdaniel adamsel vy