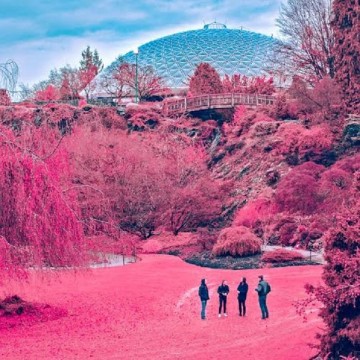 Popular music in the 1990s was, for all intents and purposes, absolute mind-warping rubbish. There’s no other explanation for the success of 311. These broad swaths of negativity are irrefutable. I was there. I lived the madness at hundreds of concerts and festivals. I witnessed Third Eye Blind inexplicably sell millions of records. And now there’s a crop of bands that are channeling this music, the music of their youth for inspiration. I mean have you listened to Smash Mouth lately?

Now that I’ve prefaced this review with my own personal vendetta against mainstream music of the 1990s, let’s discuss specifically Swooner, the third record from Vancouver duo The Zolas. Zachary Gray and Tom Dobrzanski toil earnestly with these aforementioned sonic trappings, acknowledging, but with an eye towards improvement. Their 2009 debut Tic Toc Tic struck an indie cord and the affable track “The Great Collapse” which made them a buzzworthy band on both the indie and mainstream music charts. Gray’s warm but intermittently flinty vocals recalled a more placid Conor Oberst. “The Great Collapse” focused on their music’s most basic building blocks – catchy pop vocals, a solid hook and piano instrumentation. Their second record Ancient Mars replaced this simplicity with discordant layers of musicianship. Swooner maintains this trajectory and in doing so misappropriates the bands they’ve used as inspiration. Third Eye Blind wrote terrible songs, but they did so with confident, infectious simplicity.

The opening track, “Molotov Girls,” introduces the record with a flourish of thumping synth-laden electro-pop. The result is a song that feels disingenuous, a song that betrays the capable (but often hammy) songwriting behind all the empty tacked-on layers. The trend continues through almost the entire record. The Zolas have added beats and production out the wazoo to palletize the catchy but banal hooks. Dobrzanski’s piano has slid to the background, little more than another layer of ambient noise. Is it due to a lack of songwriting confidence? Aiming to reach the broadest possible demographic? The Zolas work damn hard to bury the talent they actually possess as musicians.

The band finds a tenuous stasis on the catchy “Fell in Love with New York.” Through Gray’s higher vocal register and competent production, the track conjures notions of a deep cut from established indie acts that have more successfully melded songwriting with synth. Ra Ra Riot’s Beta Love record is one recent example. This proves to be the tipping point for the record, the tease when you think they’ve found a groove (albeit a shallow one). “CV Dazzle” immediately betrays this progress when “Ooooh oooh ooooh” crooning* amplifies the cacophony of heavier guitar and looped dancehall samples. (*Sidenote: What kind of wicked sickness has invaded popular music nowadays that requires “ooooh ooooh oooohs” in every chorus?)

It’s only when The Zolas strip their sound back down to the basics that they feel at all sincere. “Why Do I Wait (When I Know You’ve Got a Lover)” offers nothing more than a basic background synth line and earnest vocals. The song, unlike anything else on the record, feels grounded in a real feeling, an honest emotion. It’s also the best and last track on the album. It’s a shame that few people will likely stick around to hear it. Less is always more on Swooner, and it’s a shame that The Zolas can’t more often trust the naked simplicity of the bands they’re leaning on for inspiration.

James David Patrick has a B.A. in film studies from Emory University, an M.F.A in Creative Writing from the University of Southern Maine, and an honorary Ph.D. in bullshitting about everything else from the College of Two Pints. His fiction and non-fiction has appeared in PANK, Monkeybicycle, Squalorly, Specter Lit, and Bartleby Snopes among other wordy magazines. While he does not like to brag (much), he has interviewed Tom Hanks and is pretty sure you haven't. He bl-gs about music, movies, and nostalgia at thirtyhertzrumble.com and runs the James Bond Social Media Project at thejamesbondsocialmediaproject.com. James lives in Pittsburgh, PA.
RELATED ARTICLES
album reviewslight organ recordsswooner
8.0