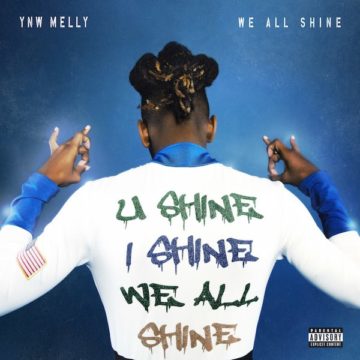 This 19-year-old artist is one of the most interesting rappers in recent memory. He blends hard lyrics with smooth, almost lullaby-style beats and rhythms, an approach that is prevalent on his breakout track, “Murder on My Mind”, which launched his rise to stardom and mainstream success. The young Floridian has such a melodic voice that every lyric sounds personable. This album highlights his growth throughout the last year, presenting a more polished version of his previous work. The enhanced spacing and precision makes We All Shine cleaner and more distinctive than his SoundCloud material from the past. Despite the more polished production, these songs don’t necessarily surpass his breakout tracks, “Murder on My Mind” or “Virtual (Blue Balenciagas)”. One standout that has already amassed positive reactions from fans is “Mixed Personalities”, featuring Kanye West, who is by far YNW Melly’s most high-profile collaborator to date. Straying a bit from the rapper’s usual formula, “Mixed Personalities” uses a bouncy beat, and even includes snippets of auto-tuned vocals, which sound a bit odd because YNW Melly’s untouched voice is already so melodic and smooth. West’s presence brought YNW Melly into a broader spotlight, which is well-deserved; he is one of the most unique and talented artist in today’s rap scene. Other standouts include the more traditional “Hold Up”, and my personal favourite, “Beat a N*gga Block”, both tracks that adhere more to the unique style that originally brought him success. With all the makings of a star—great music, a unique style, and an aura that causes him to stand out—YNW Melly has a bright future. I can guarantee that we will be seeing more of this 19-year-old for years to come.