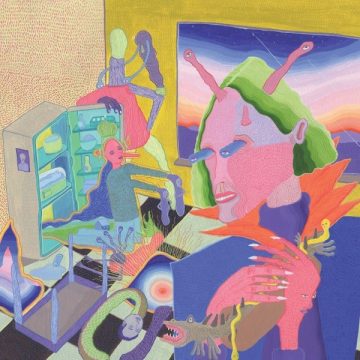 The Wytches
All Your Happy Life
Heavenly Recordings

In All Your Happy Life, England native The Wytches flies through 13 songs of swirling Garage Rock tones, with a ringing aftertaste of Shoegaze. Released September 30 from Heavenly Recordings, the three-piece-turned four-piece adds an exuberant layer of darkness to make tones bolder and riffs heavier. The scratchiness of the vocals only aids in the fuzz and is transformed into a feeling of endless, drunken somersaults. Found out through its trashy full-length debut album Annabel Dream Reader, The Wytches came out as an aggressive sweaty Garage Rock band full of self-discovery and distress. The new record understands past motives and accentuates underlying themes of love and grace that you can’t help but bow your head, close your eyes and drift to.

Songs such as “Crest of Death” capitalize on the gloomy Punk we have seen with The Wytches before, but an emphatic transition from peaceful Surf vibes turn the record into a harsh reality. Notable of SoCal Post Punks, loud Garage Rock tones are carried out by The Wytches’ diverse songwriting and creative mix of instruments. On feedback- and distortion-drenched songs such as “Can’t Face It” and “Bone-Weary,” a gentle transition of chords is guarded by a thick layer of fuzz.

All Your Happy Life has constructed a rich passage of New Wave flangey guitar, embalming ’90’s lo-fi Rock n’ Roll. The fever-inducing whirlwind of fuzz seems like an endless cry for help that will put you thousands of feet beneath the ocean. Ending with a tasteful melodic ballad, “Home,” the eclectically mastered record All Your Happy Life is a delicate balance of squeezed dark vibes and drowning gazey tones. The irony of the title of The Wytches’ second fuzzy album will fulfill your 16-year-old angsty doubts and leave you in an endless state of lethargic head-nodding.

Josh is a 20 year old creative story-teller who has submersed himself in a wide range of rock and roll sub-genres. You can find him at one of Toronto's many concert venues or exploring the city - usually behind the camera.
RELATED ARTICLES
album reviewsall your happy lifec-side
8.0