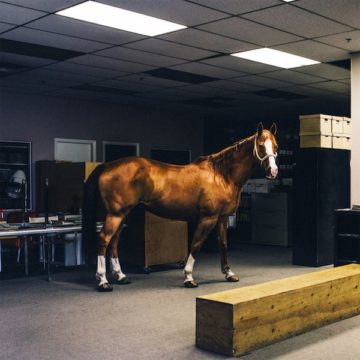 We Are The City
Above Club
Boompa Records

On their third full-length release, Above Club, We Are the city continue to push musical boundaries with their extremely interesting pop-rock music.

Above Club features more electronic elements than the band’s two previous albums. Pounding synths provide an energy that is maintained throughout the album, while “Sign My Name Like Queen” is probably the heaviest track that We Are the City has released, with crashing cymbals and a dissonant synth melody. However, while much of the album represents a new direction for the band, there are some constants from their previous work, such as explosive drumming patterns, intricate instrumental melodies, and emotive vocals.

Lyrically, frontman Cayne McKenzie continues to explore themes of faith, spirituality, and identity. On “Keep on Dancing”, he spins “Whatever God is/ it’s here with me now” into a pop hook, while the self-reflective track “Lovers in All Things” sees McKenzie ruminating on the actions of faith (“Read the Bible, believe the Bible, need the Bible”). The bridge on “Cheque Room” appears to pay homage to the band’s previous album Violent, both musically and lyrically.

Overall, Above Club represents another solid release from We Are the City, featuring songs that are both catchy and artistically creative. While the unconventional production and experimental touches may be alienating to some casual listeners, Above Club showcases the band’s desire to push themselves and will continue to reward listeners with repeat plays.

Kieran Davey is a freelance writer and music enthusiast from Vancouver, Canada. He particularly enjoys alternative rock, groovy hip-hop, and basically any music from the 60's. Aside from reviewing music, he also loves playing guitar and spending time in nature.
RELATED ARTICLES
above clubalbum reviewalbum reviews

SPILL NEW MUSIC: WE ARE THE CITY – ANNOUNCE CANADIAN TOUR FOR FEBRUARY 2016 & NEW ALBUM “ABOVE CLUB” ON SALE NOW