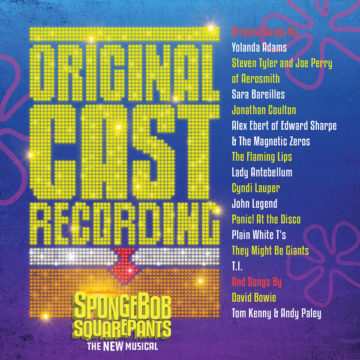 Where to even begin with this? The first thing to note is that SpongeBob SquarePants is a very funny show. As a father with two daughters, I actually enjoyed watching this show with them. We may have understood some of the jokes differently, but it is a well written, intelligent and funny show.  Further the first SpongeBob SquarePants album, The Yellow Album, was actually very good. Great pop songs and funny in parts. Even the first movie and soundtrack were pretty good. But this, this is a whole other matter.

It is advertised as having songs written by many different artists, such as Plain White T’s, Panic! At The Disco, Flaming Lips, Cyndi Lauper, T.I., John Legend and many others. Perhaps the most interesting is David Bowie’s name is on the list as well. It would appear that Bowie wrote a song for the show. Bowie did a guest voice on Season Four of  the television show (as Lord Royal Highness), so it should not come as a surprise he contributed a song to SpongeBob SquarePants, The New Musical.  However, the David Bowie song featured in the show, “No Control” is not a new one, in fact it was released by Bowie himself in 1995 on his brilliant 1.Outside album.

The other songs seem to be written for the show, but that does not mean they are great, because the songs sound like Broadway musical songs, which is what they are. Cyndi Lauper, who has written for Broadway before (the funny and brilliant Kinky Boots) shines with her track “Hero Is My Middle Name”, and They Might Be Giants have a fun song, “I’m Not A Loser”. The Plain White T’s turn in a good song with “BFF” and it is one of the few highlights. The other songs drive the plot, I guess, but fall flat.

I have not seen the play, and perhaps the songs work better in that context. It would have been interesting to add a bonus disc of the original demos of the songs, as I would like to hear The Flaming Lips’ take on “Tomorrow Is”. However, what we have is a soundtrack to a Broadway Musical clearly marketed to the younger set but lacking the parental appeal. The songs should be awesome, but the best song on the entire collection, “Best Day Ever” is an old song from the television show and co-written by the talented Andy Paley and the voice of SpongeBob, Tom Kenny.

SpongeBob SquarePants, The New Musical just does not live up to the standards of the writers involved, nor does it live up to the original television show. Music Theatre fans will probably enjoy this and it may be something that years from now develops its own cult, but as far as an album goes, it seems to be lacking. Even as an Original Cast Recording, it falls short.

Born and raised in Whitby, Aaron discovered music through his love of The Beatles. This led to a career in radio, writing for various publications, and ultimately a radio show about The Beatles (Beatles Universe), which ran for over four years. When not immersed in music, Aaron enjoys spending time with the loves of his life -- his wife Andrea, and daughters Emily and Linda (all of whom have an intense love of music too).
RELATED ARTICLES
album reviewssony musicvarious artists
9.0