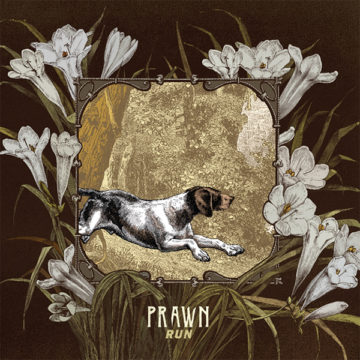 Emo is the most difficult genre of music to review. Once you look past the genre’s title which easily carries the most negative connotation in music and the commercial pop music which was sold as “emo” in the early 2000’s, you’ll find a genre which is complete. The lyrics are direct, the guitars are ambient, the song structure varies along with the drum patterns, and the artists achieve exactly what they set out to do. It won’t matter if Empire! Empire!, I Was a Lonely Estate or American Football becomes the biggest bands the world has ever seen, you will not hear a hip hop beat on one of their records. The same can be said for Prawn whose latest release Run keeps to the same path which the band started on, mostly for the better.

Run delivers to Prawn’s fans exactly what any fan would want in its lack of change. These are 11 more songs to add to your catalog and will scratch the itch for any lover of the world’s finest musical crustacean. As for the slight variances, the song “Hunter” certainly has a dancier beat than what emo fans are used to. The song “Hawk In My Head,” has a gang vocal in it which is more akin to emo’s jock older brother, pop-punk. However, most everything else is standard fare for the band and will not hook anyone who has already come down with a negative verdict on the genre.

Critics of Run will also be able to copy and paste their issues which they had on other emo releases, most of which are honestly invalid. The number one critique on emo music is that it’s emotional, which is a ridiculous issue as conveying emotion is the point of music. However, a critique on exactly how an artist conveys emotion is completely logical, and Prawn’s lyrics are a little direct. Their words tell you exactly how they feel, whereas showing how an artist feels with symbolism and metaphor typically invokes a much stronger emotional response. There is also an issue of recording quality and mixing. While the raw style is certainly appreciated the vocals are often drowned out. This record doesn’t necessarily need a full Pro-tools make over but to be able to hear each part clearly would be highly appreciated.

Society is often obsessed with change and constant reinvention, even in the name of sacrificing quality. Prawn’s Run ignores that obsession and instead insists on keeping the train on the rails. However, there is almost always room for improvement. If the words on Run hit a little harder and the songs were mixed a little better it could be a real game changer. Yet, this is still a proper showing for Prawn and an album to be proud of.

The Spill Magazine is a Toronto-based online publication dedicated to covering the independent music scene with a strong focus on our thriving hometown talent. Our writers bring you up-to-date news, in-depth features on musicians and reviews for the latest CD releases. We also travel to the front lines for all local festivals including Canadian Music Week and North by Northeast.Don’t forget to check out our Facebook and Twitter pages for all daily Spill updates.
RELATED ARTICLES
album reviewshunterprawn
8.0