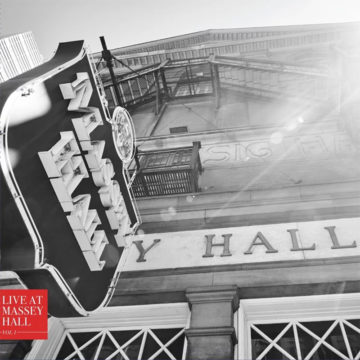 Live At Massey Hall – Vol. 1, released on Nov. 28 for Record Store Day Black Friday, is available on vinyl at various independent record stores across North America. It is a collection of live performances by well-established Canadian musicians put together by Arts & Crafts and Massey Hall.

The album serves as a tribute, both to our wealth of homegrown talent and to one of the country’s most beloved and prestigious venues. A wide range of genres and styles are represented from the carefully selected group of artists.  Musical experimentation, crowd engagement and audible applause contribute to the live authenticity of the songs.

Destroyer creates an intimate setting in the first track with his solo rendition of “Foam Hands”. His acoustic strumming intensifies at the end which leads into Constantine’s “Nighttime Anytime (It’s Alright)”. The rock virtuoso song features wailing guitars and the audience enthusiastically singing along.

“Almost Everything” by Hayden adds a slight blues edge in his lyrical ode to childhood musical passion. Dan Mangan’s “Vessel” feat. Blacksmith is an experimental extension of his recorded music with distorted guitars and guttural exclamations. Emily Haines commands the stage through her poetic rhetoric in “Fatal Gift” feat. Soft Skeleton.

Side two begins with crowd pleasantries from the Saskatchewan native Andy Shauf as he rolls into his soulful performance of “The Magician”. Francophone musician Cœur de pirate is truly humbled by her first sold out show at Massey Hall. Her sweet and powerful vocals echo in the room as she sings “Place de la République”.

The always captivating Bahamas delivers a smooth performance of “Like a Wind” followed by Japandroids taking off into an explosive delivery of their 2012 hit “The House That Heaven Built”. The sincere and calming track “Die Alone” from Whitehorse is the perfect ending to the album.

Overall, Live At Massey Hall – Vol. 1 is an excellent example of the Hall’s acoustic superiority and does justice to each featured artist’s sonic integrity.

Arts & Crafts will donate $1 from every album sold to the restoration of Massey Hall, set to be completed by 2020. This process will ideally both conserve the venue’s historic significance and improve future Massey Hall performances and experiences.

Nicole Swanson has recently made the move to Toronto from Fernie, BC, trading mountain life in pursuit of a career in the music industry. She can usually be found at live shows throughout the week, always in search of great new music.
RELATED ARTICLES
album reviewalbum reviewsandy shauf
9.0