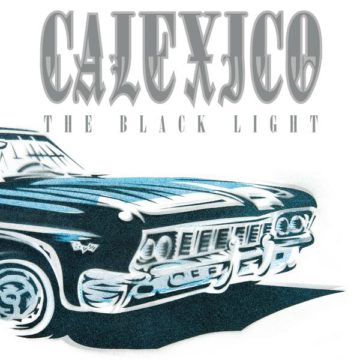 Calexico, based in Tucson, Arizona, is essentially Joey Burns (vocals, guitars, bass, cello, piano, keyboards, accordion, percussion, vibraphone) and John Convertino (drums). The Black Light was their second full-length album, released in 1998. It was released 20 years ago, hence the 20th Anniversary Edition being released this year, and it is good to have this album back in the limelight again. One good thing about the anniversary editions of albums is that older albums that may not get a lot attention these days suddenly become noticed and played again.

The Black Light is an fantastic album, a concept album about Arizona and northern Mexico. It kicks off with two instrumentals and it is not until track three that the vocals kick in:

“Beneath the neon hub of downtown/
The local hotel ghosts blow back around./
On those drugstore cowboy nights,/
Cling to the bar, then disappear from sight”

Pure poetry and you get a pretty good idea where this Tex-Mex band is going.

Each song folds into the next and one is left with a complete listening experience. Given that it was released in 1998, it is interesting to note that it plays like an album. Even though the norm, at the time, was to release an album full of songs, but not a theme, Calexico did what they did the unexpected and it stood out.

Musically, it is all here, twangy guitars, layered sounds, incredible vocals all come together to form a stunning album, and now, fans can enjoy 11 additional songs. Three versions of the stunning “Minas De Cobre”, but it is the singles, such as “Drape” and Lacquer” which make this new edition downright a must have. These are two songs that fit perfectly on the album. The previously unreleased “Bag Of Death” is a breathtaking instrumental and the perfect way to end the album.

The Black Light has aged remarkably well and the time is right for the album to be rediscovered. Not all of the extended anniversary reissues are brilliant or necessary, but this reissue is fantastic and certainly a welcome addition.