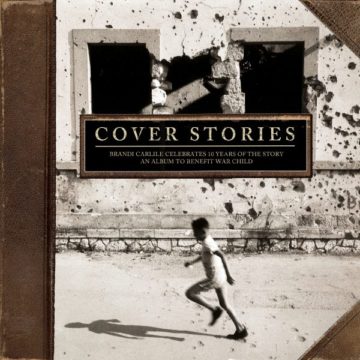 In 2007, Folk Artist Brandi Carlile released an album to initially little fanfare called The Story.  But then through television exposure (Grey’s Anatomy) the album caught on and into 2008 continued to gain new fans.  The album became a hit, and it was much deserved.  Some would argue this is Carlile’s best album, I would disagree, but it is the album that got her a great deal of attention.  Ten years later artists from all genres and ages have come together to pay tribute to the album and to this incredible artist/writer.

As the title suggest, Cover Stories: Brandi Carlile Celebrates 10 Years of the Story (An Album to Benefit War Child) UK, is a benefit album to support War Child.  A worthwhile cause to aid children in war torn areas of the world.   A charity close to Carlile’s heart.  Carille came up with the idea and approached artists.  It was not a difficult task, as she has many fans in the music world.   This is a cover of The Story in the same track order by various artists.

All the songs on this album are brand new versions, save Adele’s take of “Hiding My Heart” (originally found on her album 21) and Ruby Amanfu’s cover of “Shadow on the Wall”, (recorded in 2015).

Cover/tribute albums are a tricky thing.  Depending on the artist and how the song is covered, it can be a disaster or in some cases a real treat.  The artists on this album are most definitely fans and want to honour the music in their own way.  Sadly, the best intentions do not always lead to a great album.  When it works, this album is pure magic, and when it does not work, I was reaching for the original.

The source material the artists had to work with is near flawless.  A deeply personal and beautifully written album.  The songs are stunning.  So, the bad news…Pearl Jam, Indigo Girls, and the brilliant Jim James, just do not pull it off.  Perhaps they are trying to hard to put their stamp on the songs, but quite frankly they do not do the songs justice, nor do they make them their own.  For the record, given Pearl Jam’s covers over the years, I was expecting a great deal more, as I was from Jim James.

The good news is that the good far outweigh the bad.  Dolly Parton provides some of her most emotional vocals ever with her cover of  “The Story”, while Old Crow Medicine Show, show how to do it right with their bluegrass, rocking version of “My Song”.

The star of the show, however, is Kris Kristofferson with his version of “Turpentine”, one of the highlights of the original album, but when you hear Kristofferson growl the opening line “I watch you grow away from me in photographs” it feels like punch to the stomach.  Not to draw comparisons, but this could be his “Hurt”.  He makes the song his own and just turns it dark.  “But I’m warning you, we’re growing up” sounds sad and threatening at the same time.  Powerful does not even begin to describe it.

The Avett Brothers, Anderson East, and TORRES turn in convincing and brilliant covers and go a long way at owning the song.

This is not so much a tribute album to Carlile, but a re-recording of her classic album  But it is a tribute to the album itself.  Overall, a very good tribute to a brilliant album.  Both would be a welcome addition to most collections.

Born and raised in Whitby, Aaron discovered music through his love of The Beatles. This led to a career in radio, writing for various publications, and ultimately a radio show about The Beatles (Beatles Universe), which ran for over four years. When not immersed in music, Aaron enjoys spending time with the loves of his life -- his wife Andrea, and daughters Emily and Linda (all of whom have an intense love of music too).
RELATED ARTICLES
album reviewsanderson eastbrandi carlile
7.0