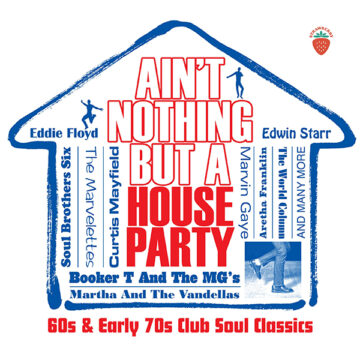 It just might be a mistake to name the popularity of 60s and early 70s soul a ‘soul revival.’ The reason is quite simple – either in its dance or ballad form, that music might not have been topping the charts (not as often as it should) but it just never went away. Bruce Springsteen’s soul covers album is just another proof of that fact.

So, in case some (probably younger) listeners might have missed the initial boat or have not caught up with it at some point, or for those already converted who don’t have some of the singles, or just simply, as the title of this compilation says, Ain’t Nothing But A House Party, the good folks at Cherry Red Records have come up with yet another cracker 3-CD compilation set  of dance soul classics known and unknown.

As is always the case with Cherry Red compilations, they are immaculately researched and annotated, and go across original soul labels. The first two CDs concentrate on the US soul music, with tracks with legends like Otis Redding and Marvin Gaye, for example, while the third disc focuses on the soul made in Britain that includes recordings from visiting US stars like Garnet Mimms.

Or, if you want it put in not too many words, excellent and essential, particularly if you actually are having a party, a house one or elsewhere.

Formerly a lot of things, including a journalist and a translator, currently a freelance writer living in The Netherlands.
RELATED ARTICLES
album reviewalbum reviewscherry red records
9.0